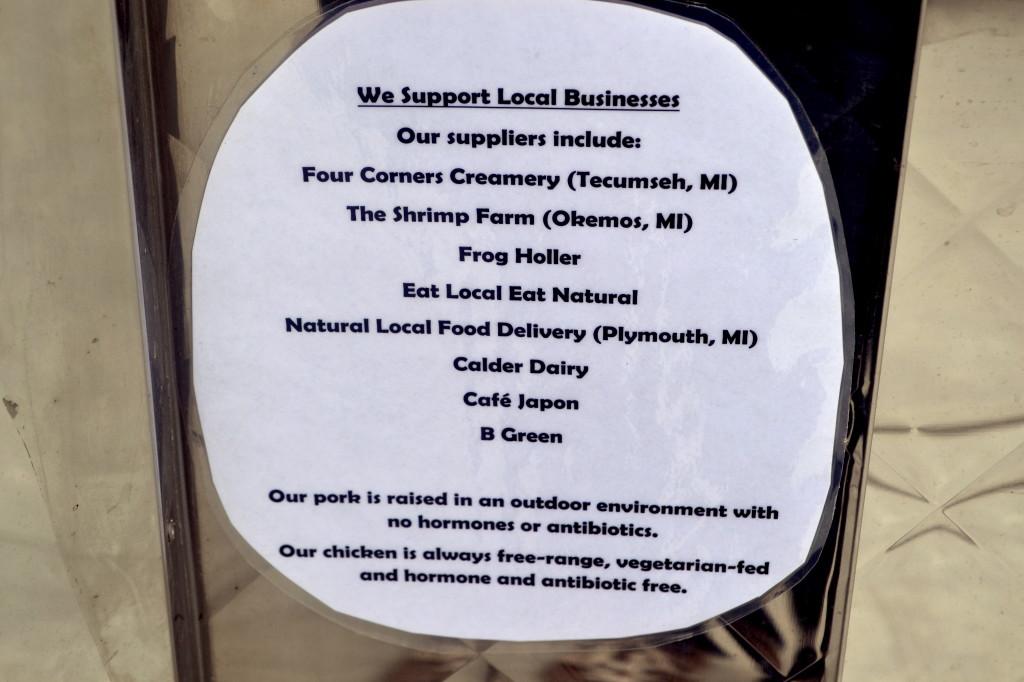 Dejabo del Sol displays the farms they buy ingredients from on the side of their cart.

Locavores and organic foodies take note: the newest addition to Ann Arbor’s sprawling selection of local eateries has just landed in Downtown Home and Garden’s parking lot. Mark’s Carts is a collection of food carts varying from Asian- and European-inspired menus to a hoagie cart. Since its opening on May 9th, Mark’s Carts has provided delicious local fare to countless Ann Arbor food lovers.

Marissa Soloman, a senior at Community High School and a Mark’s Carts customer, loves the vibe of Mark’s Carts. “It was just a really cool atmosphere … I didn’t really know what to expect, but it was just super Ann Arbor. All these carts that were all really different kinds of food. I only had a taco, but it was probably the best taco of my life,” she said, speaking of the black bean and carnitas (Mexican-style pork) tacos on the Darcy’s Cart menu. Darcy’s Cart also features an extensive array of breakfast burritos, ranging from “The Original” (egg, potato, cheese, rice, sour cream, salsa, flour tortilla) to “The Derek” (potato, rice, black beans, spinach, sauerkraut, salsa, flour tortilla). All of the ingredients at Darcy’s Cart — and most other Mark’s Carts eateries — are from local and organic farms. “Local food is important to me,” said Solomon. “I’d rather support someone from Ann Arbor than someone from like, California.” Many carts list the farms they buy ingredients from on their carts, or have this information available online.

One of the carts featured in the courtyard behind Downtown Home and Garden is The Lunch Room, an all-vegan lunch cart co-owned and operated by Phyllis Englebert and Joel Panozzo. Englebert has been a vegan for the past few years and an on-and-off vegetarian since she was a teenager. “I can’t imagine cooking any other way,” she said. The Lunch Room’s menu features “super tasty, healthy, vegan food” ranging from a curry potato soup to a peanut butter and jelly sandwich for younger customers.

As an outdoor food court, the success of Mark’s Carts is often dependant on the weather. Despite Michigan’s notoriously fluctuating climate, Mark’s Carts has still wowed costumers. “Overall, the response in the community has been super,” said Englebert.

Mark’s Carts has been a hit with the foodies of Ann Arbor, but the locavore craze on West Washington has only just begun. “I think it’s going to grow a lot,” said Englebert. “There’s still more carts that are going to open up and more people are still going to find out about it, so I think the future of Mark’s Carts is a really popular, packed, vibrant destination for Ann Arborites and out of towners.”