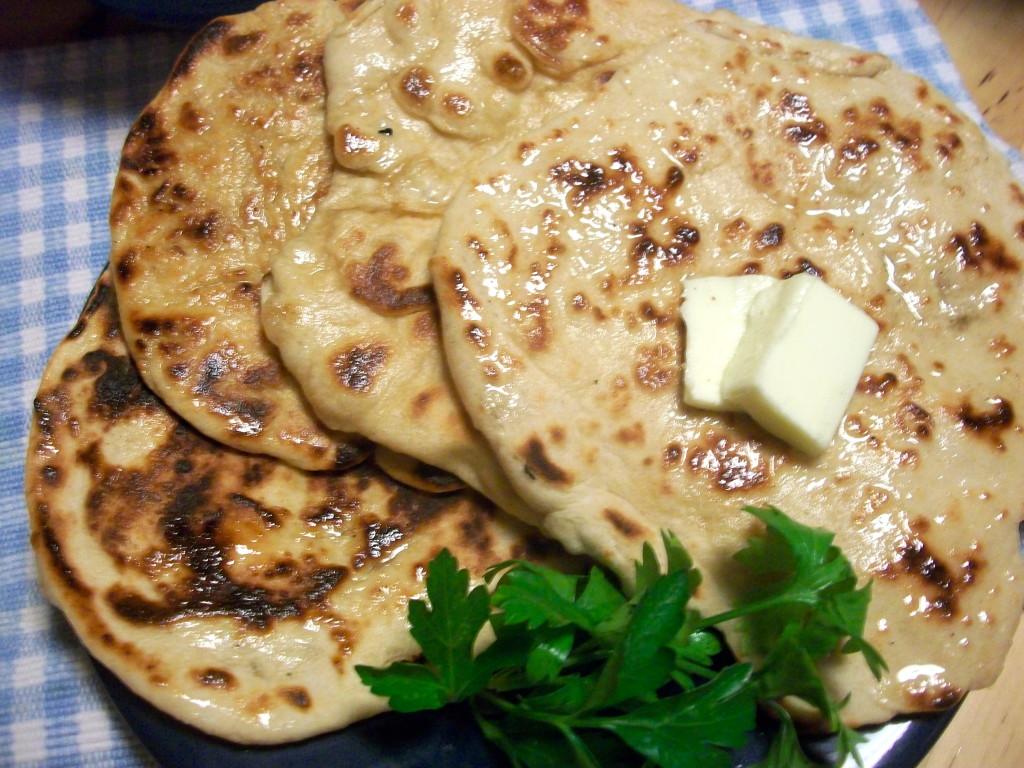 The first time I had naan was years ago at Shalimar Indian cuisine in Ann Arbor.  The naan at Shalimar was perfectly light yet crunchy, buttery yet sweet, and wonderfully delicious.  As one of the most basic and quintessential recipes of Indian cusine, any adventurous chef ought to try this recipe.  A misconception about this fluffy Indian bread is that the soft, pillowy results are hard to replicate at home without a tandoor-a traditional clay oven.  Thankfully though, many at-home cooks have been able to replicate this at home on the stovetop.

Mix the flour, baking powder, baking soda, sugar, and salt together in a bowl. Make a well in the center and add the yogurt and oil.
Add half the milk (1/4 cup) and mix everything together to form a ball. At this point, you need to gauge how much more milk to add. Your dough needs to be soft enough that if you poke it with your finger, it leaves an indentation.
Knead for seven minutes until the dough is almost bubbling (when small bubbles forming under the surface of the dough, and the bread has an even texture and is not dry or crumbly). Keep covered in a warm place (such as a warmed oven) for two hours. Although the dough will rise, it will not double and may be slightly sticky to touch.
Heat a medium-large nonstick skillet on medium-high heat. Divide the dough into six to eight balls. Roll each ball out with a rolling pin and with the aid of extra flour. Try to make your bread as thin as possible.  At this point, you can sprinkle whatever garnish you like on top of your uncooked naan, or leave it plain like I did.
Brush the other side of the naan with oil and place the oil side down onto the skillet. You will see the top of the naan bubbling. After a minute or less, flip your naan. Continue cooking until your naan is golden brown and throughly cooked. Brush butter on the naan and serve immediately.

Look here or here for other ways to make or cook your naan.  Also, enjoy your naan with this butter chicken.