The Secret Lives of CET Members 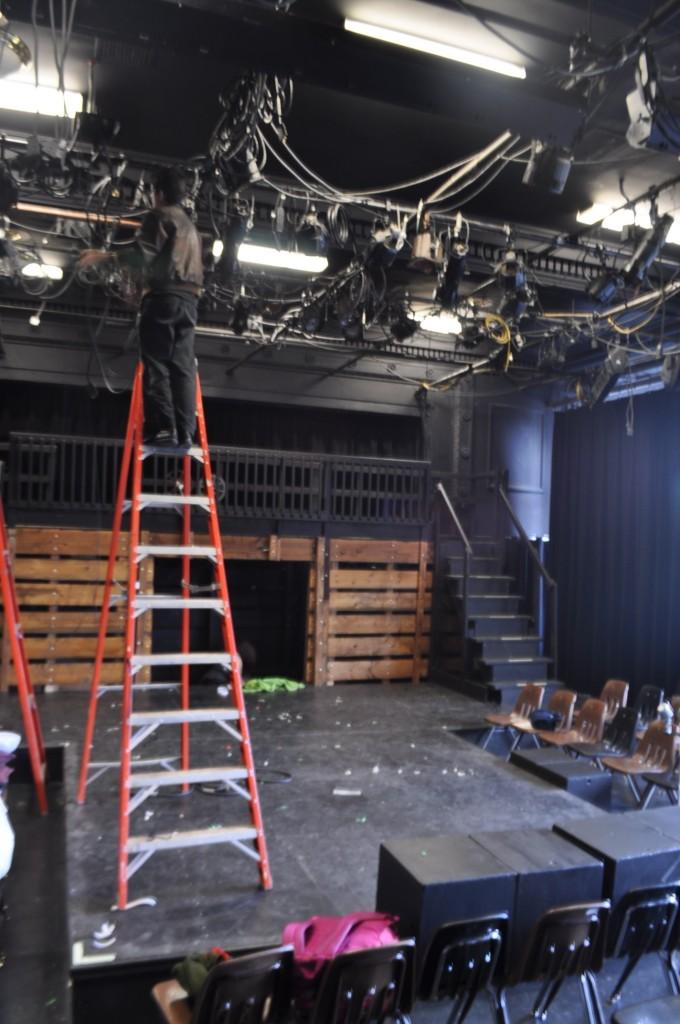 People who know members of Community Ensemble Theatre (CET) know the signs leading up to and during tech week. ‘Tech week’, the week before the show, is infamously known among those involved in theater as hectic and stressful. For some people, tech week can be recognized by a lack of sleep, a sudden monochromatic fashion tendency to wear black, the remnants of eyeliner and stage makeup, and the occasional surprising new choice of hair color. It’s undeniable that there’s a buzz around the school on those few performance days when people file into the Craft Theater, the lights hit the stage and something magical happens. Unbeknownst to most of the school is the extent of the commitment CET members put into a show leading up to the performance.

Having participated in seven CET productions, junior Briana O’Neal, a member of the vocal ensemble and makeup crew head for “Evita”, isn’t new to the process. Briana O’Neal described a typical day during tech week,`

“Normally you’re in [the theater] during your free blocks and lunch… you’re sweeping or you’re mopping or you’re painting. After school, rehearsal starts right away, [and] you’re there until 9 or 10 at night… making sure everything’s perfect for the show.”

CHS senior Britney O’Neal, props crew head and backstage manager for “Evita”, explained how hard it can be to balance school and CET during tech week. “At the end of the day I’m exhausted, my feet hurt, I’m running over things I need to fix, or things I did well… If I have time to do homework, I try to do a little bit of it when I get home, but usually at that point it’s 11 p.m. or 11:30 p.m., and I just want to go to bed, so I go to bed, because sleep is important.”

In addition to the unrecognized amount of time the cast and crew put into preparation, it is understood that techies tend to work behind the scenes and often don’t get as much credit as those in the spotlight. When asked about this, student tech director for “Evita”, Rachel ‘Rocky’ Blakemore, commented, “I know that tech is, yes, overlooked a lot of the time, but that’s how it’s supposed to be. If it isn’t overlooked, it means we did something wrong; if they notice what we did, that’s a bad thing. We’re in all black, we’re supposed to be ninjas, and when we bring on something, it’s supposed to keep the show moving.” Nonetheless, Blakemore feels a lack of appreciation and credit for the work put in before the production. “Everybody knows that actors go to rehearsal, everybody knows that techies are in [the theater] building. Nobody knows how late we stay, whether it’s tech or actors.”

Juniors Alexandra Cubero-Matos and Hannah Hesseltine were double cast for the lead role of Eva Peron. A week after the show, Cubero-Matos reflected, “I’ve never been the main role, I’ve been a supporting role where I have one song or something… but with this show, it took so much out of everything… basically it’s this or nothing; it’s all you have.” Cubero-Matos was listed under ‘general tech’ in the program of “Evita”, and spoke about the audience’s perspective after a show. “They think about the actors behind the lines, but they don’t think about the techies behind everything that we’re acting on that is making it a story.”

James Harkey, a member of the vocal ensemble is quick to point out the ‘not-so-glamorous’ jobs that are a part of being in CET. “One person stands there and takes our jackets while we quick change, and I think that’s overlooked… Lane, who is on our tech, does a lot of work for the guys… and I wanted to thank him in front of everyone. I haven’t gotten the chance yet, but when I do, I’ll thank him.” Along with the seemingly unimportant jobs, every bit contributes to the long process of producing a musical like “Evita”. Harkey comments, “When you look at a play, you see a play that takes two months to make, but you’re only there for five days, and I don’t know if that does it justice.”

Regardless of the credit, or the lack of credit, Blakemore has used the pressure of CET, and more specifically tech week, to learn a lot about time management and coping with stress. When talking to Blakemore, there’s an air of leadership and control, along with a distinctly realistic and positive outlook on her role in CET. “It doesn’t matter if you’re stressed, everybody else is, so it’s just harder. Everybody’s a little antsy, everybody’s a little worried… but then you just band together, either rant about what you’re stressed about, or just totally ignore it, and it brings you closer together.”

Although CET plays can be time consuming, stressful, and a big undertaking, something positive Blakemore takes out of the situation are her genuine friendships. “We spend a lot of time together, and I’ve gotten to help with every single part of tech, so I’ve just gotten to know everybody, and some of my closest friends are in CET.”