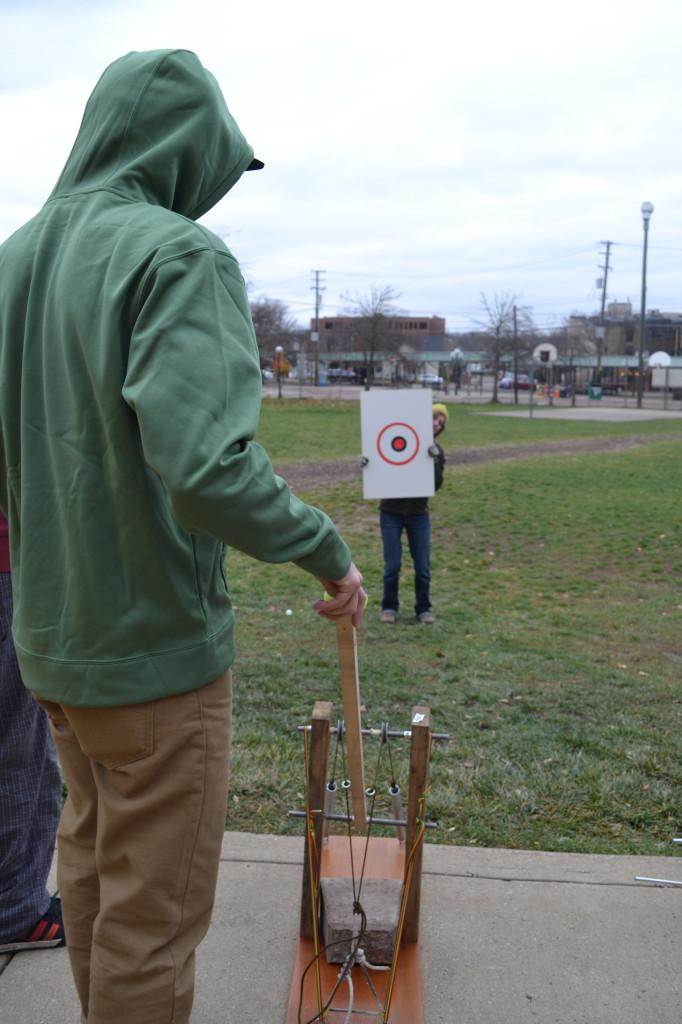 Students line up on the sidewalk near Community High’s back lawn, letting out puffs of cold breath as they huddle around strange wooden, plastic and metal contraptions. “Three… two…one… FIRE!” calls CHS science teacher Courtney Kiley, and a hailstorm of ping-pong balls explodes from the mouths of the catapults, cannons, and assorted projectile launchers assembled at the starting line.

Kiley, who teaches Foundations of Science I in addition to the FOS IV Physics class, has been doing her projectile launcher project for five years, ever since she began teaching at CHS. The project requires physics students to build some kind of mechanical device powerful enough to propel a ping-pong ball 15 feet, and incorporates the general launch angle calculations students have been learning. The results are fascinating, in and in some cases, terrifying.

A trio of students in block four, for example, built a powerful twenty-five foot air pressure cannon. After they hooked it up to an industrial air compressor at 120 psi, the air cannon fired a ping pong ball over a distance of 70 feet.The only limitation,” Kiley said, “was that it took a long time to fill up the air chamber.” But, she asserts, “It was awesome.”

Some of the past launchers, though, have been less successful. A few years ago, one group built their launcher out of a spinning bike tire. When the tire was stopped, the ping-pong ball was supposed to be launched into the air, but instead it was pile-driven into the ground just three feet away.

Over the years, Kiley’s favorite projects have been those spectacular failures that showed ingenuity and creativity. She also loves seeing historically accurate projects, like trebuchets with real counterweights and slings, or the catapult modeled off a Da Vinci design that was built this year.

“My first year,” Kiley recalled, “I let the kids convince me to let them launch golf balls. And… some of them [had] very high-capacity projects, so we had a golf ball go into the Farmer’s Market. So I’ve learned to say no.”

This year, Kiley did let some students use golf balls, after watching them launch ping-pong balls first. Since golf balls have more mass, the air resistance that slows down the ping-pong balls has less effect on them, and they go farther at a higher velocity. The heavy, high-speed missiles can be dangerous, though, so Kiley only distributes golf balls to low-capacity projects. “It’s a judgement call,” she said.

The project has changed a lot since Kiley’s early days at CHS. “The first year… I was really nervous,” Kiley recalled.  “I made everyone wear safety goggles.”

Kiley also noted that the first year, “the project was really just the process of building, and didn’t really have any calculations to go along with it. So I’ve kind of legitimized the project a bit more with some math and research, instead of just building something.”

One new component of the project this year has been the addition of the accuracy test. “The notorious thing about this project is that it’s not accurate, and I’m really interested in having the kids make something that’s sturdy enough that could fire consistently, which some do but most don’t.” This year, Kiley tried to incorporate accuracy more by holding up a big bull’s-eye poster and having students launch at it, but she admits that most of the time, she was just jumping around trying to have the ball hit the target by moving the poster board.

“Maybe I should emphasize distance less and accuracy more,” Kiley mused, “so that people don’t come in with mega-catapults and actually focus on building well-constructed ones that could actually fire over and over again into a pot or a bucket.”

But since Community has no indoor space large enough, the final firing competition has to take place outdoors, where the wind can easily blow the light ping-pong balls off track.

Still, Kiley doesn’t think that there’s much she would want to change about the fun and educational project. “I like it,” she said. “It’s not my favorite, because the egg joust just blows this thing out of the water, but it’s a good project.”

For the upcoming egg joust, physics students will again be integrating their knowledge to build carts that cushion an egg from outside forces,  and then pitting the egg carts against each other in deadly jousts. Look out for pictures of the egg joust competition on The Communicator in the spring!