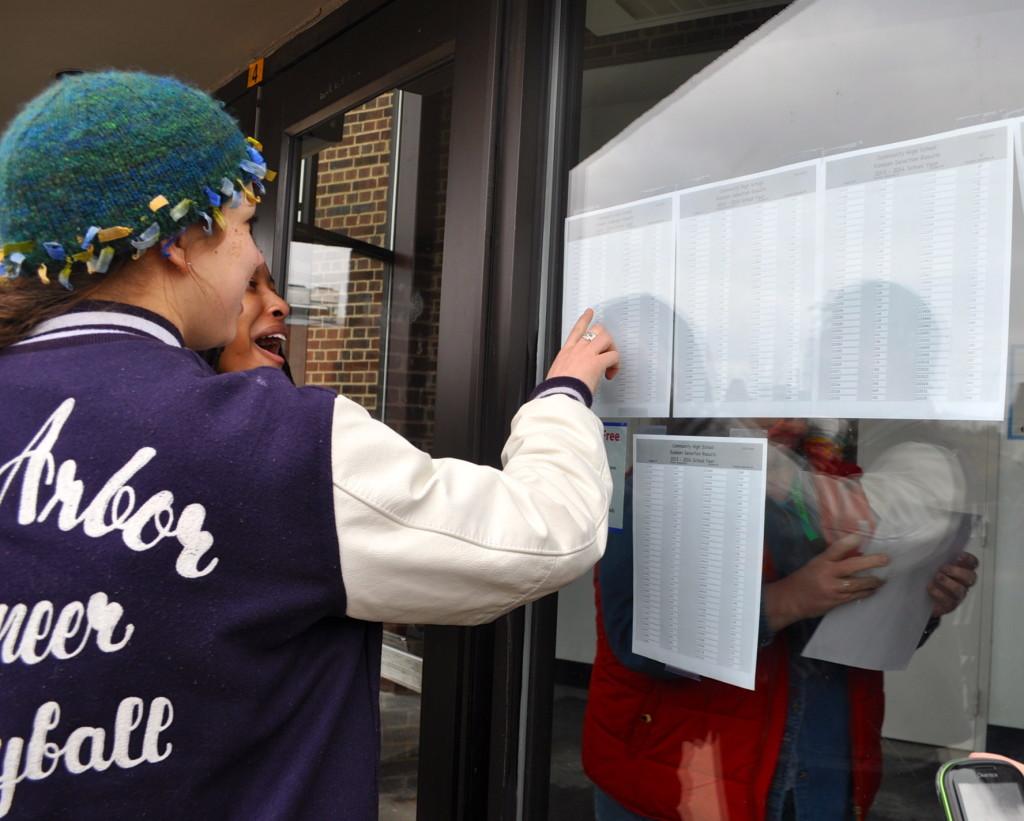 “I hate this day because of all the numbers we drew that weren’t going to get in,” said John Boshoven. A record this year of 454 students applied to the Community High School lottery, held on Feb. 12, and 122 got in. The class of 2017 will have 114 students, so they expect at least eight students to decline their acceptance. “It’s hard because all these kids thought that Community was a good fit for them and just by randomness most will not [be accepted].”

The lottery process starts on the same day at 9:30 a.m. Seven people sit around the table in room 222 with two cardboard boxes in front of them: one contains papers numbered 1-454 and the other has the names of all the applicants. No computers or electronic devices are used in the drawing process; it is all paper and pen. Boshoven picks and reads off the names of the students and Mike Mouradian, a former CHS teacher and counselor, randomly picks a number out of the other box to pair with the student. Luke Cerry, the Dean’s intern, staples the two pieces of paper together. Registration and CR secretary Latonya Mayfield, Counseling Secretary Karen Schleh, Counseling Intern Ashley Greer and Secretary to the Dean Christina Hicks each sit with two pieces of paper in front of them that list the applicants names. They write down the number assigned to the applicant when they hear it read off.

It’s a bittersweet day. The mood in the room begins light, with excitement for a new class. However, they cannot help being sad since about three quarters of the applicants are not accepted. Diane Dudley sends a basket filled with chocolates and other treats to the room to cheer them onwards.

Hicks posted the results on the window outside Community’s back lawn after school. They wait until 3 p.m. to display the numbers so that middle schoolers are not disrupted during class. Boshoven hopes that posting it at this time will allow students to have support from their parents.

At a little past 3 p.m. eighth-graders from all of the different middle schools in Ann Arbor start to crowd in front of the posted numbers. The back lawn of CHS, usually occupied by current students, is covered by groups of eighth-graders, each one having just heard the news that could determine the course of his or her next four years. There is an extreme range of emotions, with some of the students comforting their bawling friends, and some literally jumping for joy at the good news.

Conor Durkin, an eighth-grader from Forsythe, wasn’t selected. “I was close,” Durkin said, “I was 140.” Durkin was attracted to the many electives CR’s he could take at Community and the freedom in course selection. Even though Durkin isn’t a student at CHS, he still remains optimistic. “I’m a little disappointed, but I’m happy that I got such a low number… I might try to duel [between CHS and Skyline].”

Morgan Barnes-Whitehead, an eighth-grader at Ann Arbor Open was not one of the lucky 122. She wanted to come to Community because of the similar atmosphere that Ann Arbor Open has. Barnes-Whitehead is nervous for the future because she thinks the other high schools are big and intimidating. She felt “…sad, and a little scared. But happy for my friends that did get in.”

Some students try to look at the bright side even though they did not make it into Community. “Well I’m disappointed, but I guess I figure it just wasn’t meant to happen,” Elena Chambers, an eighth-grader at Ann Arbor Open. Like many eighth-graders, Chambers was drawn to Community because of the supportive atmosphere. She applied to Pioneer High School but will attend Skyline High School next fall if she does not get in.

CHS freshman Kaiya Wolff recalls this same day a year ago. “I curled into a fetus on the bus and I cried [of happiness] because my mother told me I got [into Community].” But with all the excitement comes a lot of frustration. “You see friend groups getting split up, and just being happy and sad at the same time. A lot of mixed emotions,” added Wolff.

While it is a sad day for many, it is a very exciting day for some. Cheyanne Anderson was number 60. There are a few things that attracted Anderson to Community. “Well, it’s very individual, which helps me, because I work better on my own time, by myself, and Community seems really good for me. And if I needed more advanced stuff I can take a CR, which sounds really nice,” she said.

Another member of the 122 who got in is Sasha Hurd. The Ann Arbor Open eighth-grader wanted to go to CHS for multiple reasons. “I have a few friends here,” Hurd said, “and I didn’t really like how the other schools were based. And my sister goes to Pioneer and she had some troubles with the teachers there.” Hurd will be making the jump from middle to high school next fall with 113 other CHS freshmen. “I’m very happy,” said Hurd. Although it is unfortunate that not every eighth-grader who applied is able to experience Community, CHS is thrilled to see what the class of 2017 brings to the table in the coming year.