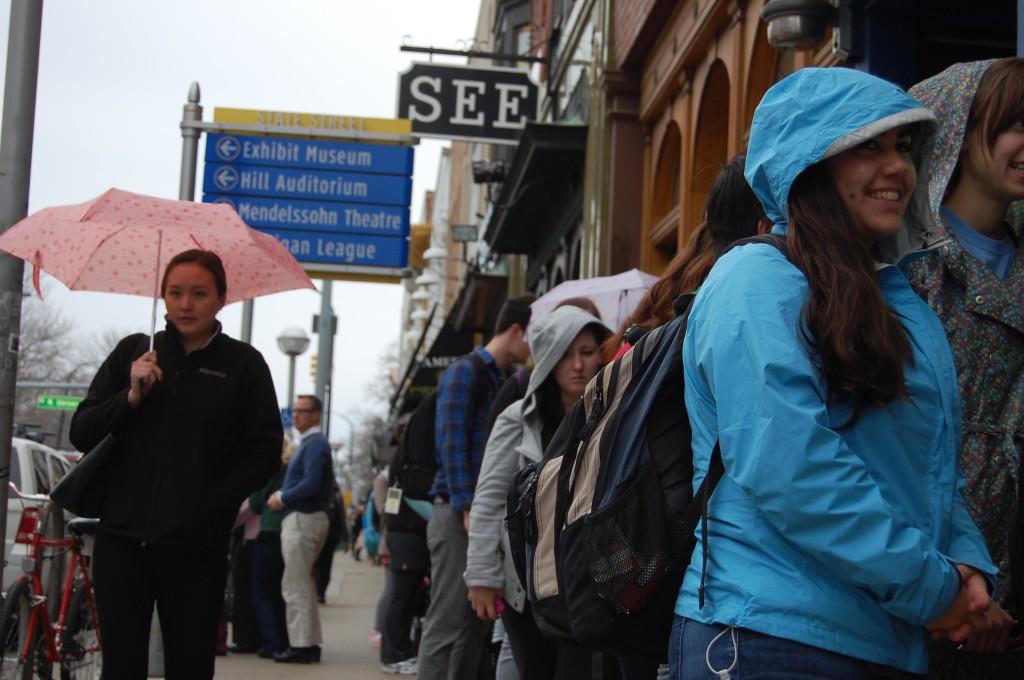 People wait cheerily in line even as a light drizzle falls.

Ben and Jerry’s has given out one scoop of free ice cream, one day a year, since 1979. In Ann Arbor the tradition has been running since 2000. On April 9, Ben and Jerry’s opened its doors to a line of hungry Ann Arborites for the thirteenth time. Thousands of people filed through, choosing between a large variety of flavors. “Free cone day typically brings in somewhere between 3500 and 4500 people, and the average wait is probably 45 min on the high end and 30 min on the low end,” said Matt Arthur, franchise owner of the Ben and Jerry’s at 304 S State St.

The preparation for employees was arduous. “We’ve really been setting up for the past three days,” said Amanda Grimm, who has been working at Ben and Jerry’s in Ann Arbor since the start of summer 2012. The workers prepared in advance for the sheer volume of expected customers. Thirty-four tubs of ice cream were loaded into the freezer up front, each filled with around 200 scoops of ice cream, as well as the extra tubs in freezers in the back room. Gallons of waffle batter were mixed, and about seven hours were spent the night before making waffle cones. Hundreds were cooked and curled.

Even in the on and off drizzle, the crowd was constant. A die-hard free-cone-day enthusiast and student at the University of Michigan named Lisa, who was waiting in line, said she was willing to wait for “two and a half hours, because that’s when my next commitment is.” This year the line stretched somewhere near Jimmy John’s at the end of the block, where Arthur said it has reached before, but plenty of people showed up and kept the line flowing.

Be sure to find out when your local Ben and Jerry’s free cone day is next year!