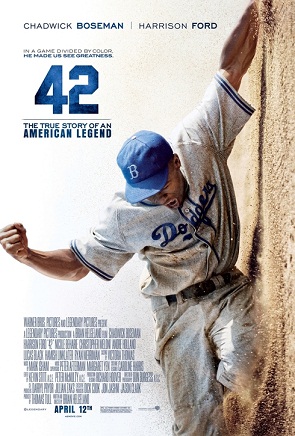 The story of Jackie Robinson is a fascinating one in real life. The journey of a young outspoken black man from the Negro leagues to the majors has enough drama on its own. As a Hollywood tale it had the potential to fall into a death trap of cliches and become unbelievable in its dramatization, but director Brian Helgeland was the man for the job as he delivered the Jackie Robinson story, last told on the big screen in the 1950’s, in a simple and inspiring manner.

The starring duo of Branch Rickey (Harrison Ford) the owner of the Brooklyn Dodgers and Jackie Robinson, played by newcomer Chadwick Boseman, have a captivating dynamic. Robinson is confrontational and loves to run his mouth while Rickey is articulate and daring. Although their relationship is owner/player at moments Rickey appears to be somewhat of a father figure to Robinson as he helps the young star navigate the social aspects of being black in the major leagues.

“42” walks you through Robinson’s journey from 1945-1948. Obviously the movie doesn’t cover every moment of Robinson’s first years in the majors but it is anchored together with the storytelling of Wendell Smith, an unheralded black sports writer. Smith helps to show the softer side of Robinson and provides a tandem story of another African-American attempting to break a color barrier.

Helgeland is fair in his portrayal of both Robinson and the rest of the people involved in baseball in the Robinson era. He shows Robinson’s fiery nature and his tendency to create trouble for himself by not backing down when confronted by white people. He also shows how Robinson learns to carry himself under the tutelage of Branch Rickey who tells him, “I want a player who has the guts not to fight back.” As for his teammates, coaches and his competition and the opposing coaches Helgeland shows the good, the bad and the ugly. Robinson is hit in the head with a pitch, called the N-word by the coach of the Philadelphia Phillies and his teammates compose a petition to get him kicked off the Dodgers. On the flip side he is embraced by fellow Dodger, Pee-Wee Reese (Lucas Black), during warm-up with an inspiring comment, “Maybe tomorrow, we’ll all wear 42, so they won’t tell us apart.”

“42” is simple but far from boring. It is also historically accurate. According to Helgeland the only time he chose style over accuracy was when Jackie exploded after a bad at bat in a game against the Phillies in which Coach Ben Chapman (Alan Tudyk) is particularly nasty. This is the only moment where the movie feels like Hollywood. Jackie swings his bat violently against the walls while screaming and crying before Branch Rickey comes down to console him. Helgeland defended his decision to include this scene because he felt it would give audiences a better sense of the great emotional stress Robinson was under.

From the high energy of baseball, to the stomach curdling forms of racism displayed against Robinson “42” delivers on what I consider to be the best sports-drama since “The Blind Side.” “42” is gripping and will keep you engaged the whole time but without the annoying-over-the-top style of many multiplex films. The acting is top-notch, the story is an American classic and Helgeland should be prepared to see “42” rack up the awards come Oscar season.