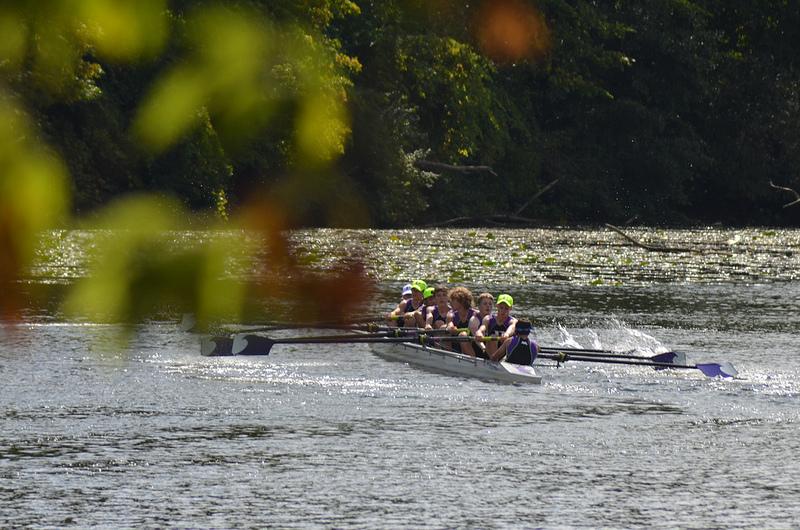 The Pioneer mens novice eight races at the 2013 Horton Cup.

Avery Farmer, a sophomore at Community High School, joined the Pioneer crew team this year from the recommendations of his peers, and for the physical challenge that rowing involves. During his first week on the team he was introduced to the intensity at which crew teams practice, frequently waking up with sore muscles and a voice in his head questioning his decision. He pushed on. The third week he and the rest of novice team were rewarded: they were finally on the water. “The water is much better than being on land because you get to feel how fast you are going and that rowing harder makes you go faster,” Farmer said. Movement is key to rowers. They like to be able to feel the progress they are making with each stroke, and when the whole boat is moving as one, it can be one of the best feelings in the world.

Novices start off slow. They start off in a large metal boat called the barge, which is a way of getting to know how an oar reacts with water. It is very wide and heavy,and thus nearly impossible to flip. From the barge the new rowers will move into the shells. Rowing shells can be a thing of beauty; they are something a team will bond with and be proud to call their own. An eight, which holds nine people including the coxswain (the smallest member of the crew and the one who is in charge of steering and giving commands), is 65 feet long and can cost upwards of $50,000. It is safe to say the novices are not rowing in a $50,000 Empacher racing shell, but the shell is still a huge step up from the old bulky barge. They started off rowing only two of the eight people at a time, then they added in another two people, and another two, until they finally got to rowing by all eight.

It is never a pretty sight when new rowers start rowing by all eight. Blades will smack together. Water will be thrown and the coxen will usually be swerving all over the river, and there will be crabs. The worst and most embarrassing thing that can happen to a rower is to “catch a crab”. There are two types of crabs. The first crab is where the rower makes a mistake and cannot get the blade out of the water, the boat does not stop when a blade gets stuck in the water. This means the oar comes flying over the rower’s head. The only way to get the oar back is to have everybody stop rowing and then the rower has to maneuver the oar back to in front of him/her. The second type of crab is much worse and much more catastrophic; it is called the ejector crab. An ejector crab starts off the same way; a rower will make a mistake and not be able to get his or her blade out of the water, only this time the oar will not simply fly over the rower’s head. What happens is the rower will get the oar locked into their stomach, and then the force of the boat moving through the water will cause the oar to pick the rower up and throw him or her into the water. It is safe to say that if you catch one during a race, you have lost.

The novices had only been rowing a little more than a month when the Horton Cup came around. It was the first time they got to feel the intensity of racing against other boats. In the fall the races are not head to head but you are close enough to still see the other boat, and for the novices this will be the shortest race they will ever race in, at only 1500 meters long. As the boats get lined up for the start the adrenaline starts to kick in. they know they are going to enter a world of pain. “Ok you’re on the clock,” the man sitting in the launch says to the boat. They begin to row, and in what seems like seconds the man sends off the Huron boat. The whole race the rowers can see the Huron boat behind them. As they row past the screaming fans and through the finish line the same thought runs through every rowers head: “Were we fast enough?”

The answer is no. The Huron boat beat the Pioneer boat by 24 seconds. Before the race, Farmer said, “I think we might get beat by them because they have been rowing longer, but I think by the end of the season we will be better.” The defeat was not unexpected, and Farmer is confident about the future.

Since the Horton cup Farmer and the whole novice crew have improved dramatically. Farmer has worked his way up through the boat and is now stroke seat. Stroke seat is the leader of the boat. They are the ones who set the pace at which the rest of the boat will have to follow. The stroke seat may not be the biggest or strongest person but they will have the best technique. Over time they will learn to carry themselves with a certain pride, and gain the respect of the boat. The only way a boat can be successful is for the eight rowers to have the utmost respect for each other and especially the stroke seat. They need to know without looking that the other rowers are giving it their all. Tom Peszek, a rower for the U.S. national team, stopped by practice on Friday to talk to the team. He talked about how the team must come before yourself.