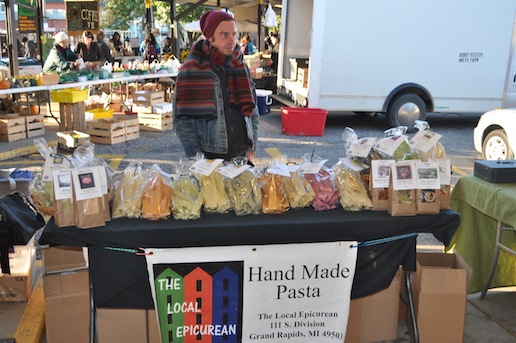 The Local Epicurean is offering Michigan hand made noodles at the Ann Arbor farmers market made by four different guys. Caleb Steiner is one of the four men that make the pasta. He has been making pasta for a couple years now but, just six months ago he joined this company.

The Local Epicurean is in about a 30 feet by 120 sized kitchen making over 100 different types of noodles. As the season changes the flavors change. Right now you can expect to enjoy squash noodles since squashes are in season now. Steiner explains how simple the process is to make the noodles each day.

“We start off with two cups of organic flour, one egg, and whatever ingredients we’re going to put into it, and then you just blend it up, beat it, it’s pretty easy and you just roll it out and cut it and hang it to dry. We do it all by hand, no machines” said Steiner.

Every company has their issues but not always major. The local Epicurean just faces issues with timing. Every once in awhile they won’t get an order in for their products and then they’re stuck not being able to make pasta. “Thats really the main issue if any” said Steiner. This won’t stop them from taking their company to the next level though. When the sales are low it can also put them behind. Last week was probably Steiner’s lowest numbers in sales but, it was not “that bad” said Steiner. Luckily, “…there hasn’t been to many low points.” said Steiner.

Although they’re located in Grand Rapids we can look forward to seeing their noodles in Zingerman’s and maybe Whole Foods. The Local Epicurean is hoping to see opening stores of their own in Ann Arbor or possibly closer to Detroit. That would help out a lot with distribution and it will be easier, closer, and cheaper to bring stuff out on this side of the state.

Working 80 hours a week and being home only two days a week has Steiner exhausted but, he loves what he’s doing. He’s heading right down the path to his future “Culinary arts is what i’m going to do the rest of my life. Pasta i’m not sure. We’ll just see where the company goes. So far, it seems to be pretty good. I might run my own store, so then I might stick with that a little longer.”

In the meantime Steiner will be skating, biking, going to good shows, and kicking it with his friends. The good things he enjoys when time is available.