Feeling Tested: CHS Students Take the PSAT and the MEAP 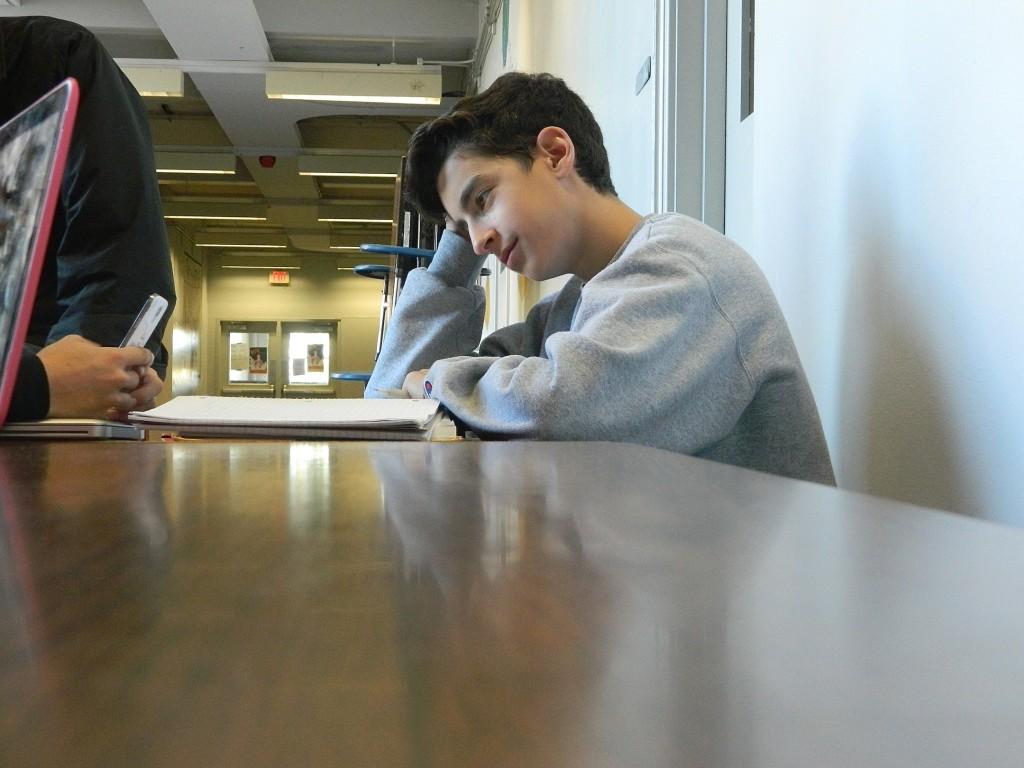 Students sometimes find it difficult to balance schoolwork and studying for standardized tests.

The PSAT and the MEAP were not a big deal for most of the Community High School students who took these standardized tests on Oct. 16, but rather a reminder of the close proximity of the more consequential tests to come.

CHS juniors, as well as a few sophomores, took the Preliminary SAT (PSAT). The PSAT is a mandatory standardized test structured similarly to the SAT; its primary goals are to prepare students for the SAT, and to select candidates for the prestigious National Merit Scholarship. “It’s a good tune-up for the SAT,” said counselor John Boshoven of the PSAT. Meanwhile, the ninth graders completed their last Michigan Educational Assessment Program (MEAP) test. The freshmen were only tested on social studies.

The PSAT, like the SAT, has three primary sections — math, critical reading, and writing.  Each section is worth eighty points, which are added to form a composite score out of 240 points. The SAT has the same subjects; each section is worth 800 points, adding up to a total of 2,400 possible points. Due to this, students can take their PSAT score and multiply it by ten to get a rough estimate of what their SAT score might have been. The SAT, however, is significantly longer, taking 225 minutes (the PSAT is only 130 minutes).

Those who have completed the PSAT, such as CHS junior Clara Motino, agreed that the test was generally not particularly difficult. “It’s a standardized test,” said Motino. “I didn’t lose sleep over it.”

This year, several sophomores went to Father Gabriel Richard High School to take the PSAT, including Laura Westervelt. Like Motino, Westervelt took the PSAT as a sophomore feeling that extra practice could not hurt. Westervelt said she took the PSAT “to get more practice on [standardized tests] so I do well on the SAT.” Westervelt felt satisfied with how she did, commenting, “I thought the reading parts were easier than the math.”

Aside from serving as practice for future standardized tests, the other significant factor of the PSAT is the National Merit Scholarship (NMS). PSAT scores determine which students can receive this scholarship. “[NMS] is a prestigious scholarship program which uses the PSAT as a method for finding bright students,” explained Boshoven. While the NMS looks impressive, it does not offer much in the way of financial aid: the scholarship is typically worth $2,500, an amount far below most tuitions.

Due to the possibility of a scholarship and the practice the PSAT offers, Chang believes that it can be worth trying hard on the test. “I think people should take it seriously, but not so much that they should get stressed out and stop doing their other work,” she said.

Boshoven feels that “stretching before a practice never hurts,” saying that some studying for the PSAT can be useful to students who are feeling anxious. Boshoven and Counselor Diane Grant hold sessions with students who take the PSAT to discuss their scores. “If [a student] sees a question they got wrong … likely they’re going to see a very similar question on the SAT,” reported Boshoven. Analyzing the PSAT results with counselors can help students prioritize what they must study for the real SAT.

As the PSAT was being taken, Community’s freshmen class completed their final MEAP test. The MEAP is issued to Michigan students between third and ninth grade; freshmen take a social studies exam.

The MEAP does not get shown to any colleges, or even open up any opportunities like the National Merit Scholarship. Instead, the state of Michigan uses results from the ninth grade MEAP to evaluate middle schools and how well they teach social studies to their students. As a result, most freshmen were fairly apathetic about the MEAP, knowing it has no bearing on their future. “It was really boring,” summarized freshman Alexandra Hobrecht.

“It was all on stuff we learned in sixth grade,” put in Sean Tichenor. Consensus among the MEAP takers was that the test focused primarily on familiar information, though most also cited certain individual questions about which they had no knowledge.

However, while most freshmen did not stress out about the MEAP, the imminence of future standardized tests does not go unnoticed by them either. “I’m glad we don’t have to do [the MEAP] anymore,” said freshman Natalie Bullock. Nevertheless, she added that she “definitely” feels pressure about the ACT and the SAT already. Bullock has an older sister who has already experienced these tests. “I’m super nervous and stressed out,” she said on the ACT and SAT.

“I probably will be [nervous] next year,” predicted Tichenor. “I’m thinking about making sure I study.”

Overall, while the recent standardized tests have prompted CHS students to ponder the tests they will take in the future, they don’t see any cause to worry about the PSAT or the MEAP. Most CHS students feel there is enough to fret about already. “Don’t stress out about it,” advised Motino on the PSAT. “It won’t determine your future like the ACT.”