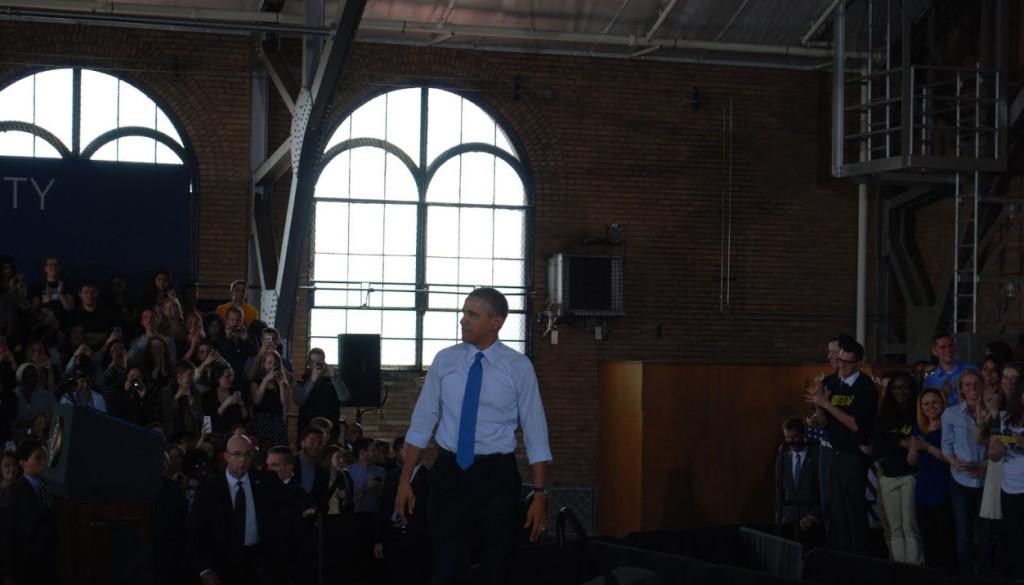 Obama walks off the stage after finishing his speech.

Following President Obama’s speech at the Intramural Building in Ann Arbor on April 2, there were an abundance of positive reactions. As the President walked off stage, numerous people applauded for him and the powerful words he said. But the University of Michigan students present weren’t the only ones who agreed with his ideas – local politicians also approved of his remarks on raising the minimum wage.

Former U.S. congressman Mark Schauer (D) said of Mr. Obama’s lecture, “It was a fantastic speech. I think the President just used common sense about why we need to build an economy that works for everyone. Build an economy from the middle out, not from the top down. And it really is about fairness and equity and opportunity, so I think he’s dead on.”

Schauer’s thoughts on increasing the wage are very similar to President Obama’s. “Workers that earn a raise are more likely to stay with their employers, have more experience, [and] a higher skill level on the job. But they take those dollars and put them right back into the economy for businesses and higher workers, so it’s a winner economically, it’s good for businesses, and it’s good for families and kids,” he said. Schauer plans to run in the next gubernatorial election, and he stated that raising the minimum wage, “will be one of my top priorities as governor.”

Yousef Rabhi (D), the Chair of the Board of Commissioners in Washtenaw Country, attended the speech and supports raising the wage too. “I’ve been to many protests and sit-ins, and events to raise awareness about economic equality, and economic opportunity for everyone,” he explained.

Due to an executive order that Mr. Obama signed in February, beginning in 2015, all federal employees receiving a minimum wage will see their hourly pay increase to $10.10. However this order does not include many Americans working for private businesses. Though Mr. Obama’s efforts show that work is being done nationally, Rabhi believes that the minimum wage will be raised at a state level first. “I think it’s gonna take a while for a national minimum wage, but I think there’s a lot of effort underway state by state to get it done at the state level. So I’m very optimistic that we can do something maybe here in the state of Michigan,” he stated.

While Michigan’s wage still stands at $7.40, Washtenaw County has already taken big steps towards giving workers higher pay. “We’ve been requiring all of our vendors to use a living wage,” Rabhi said. “So all of the vendors that work for the county have to pay a living wage to their employees…We actually require beyond the ten dollars and ten cents that the President is proposing.” This wage rule is enforced by the Washtenaw County Living Wage Ordinance, and in some cases it requires employers to pay their workers $11.64 or even $13.65 per hour, both of which are above the $10.10 the President is requesting.

President Obama came to Ann Arbor to promote a minimum wage increase, and judging by the amount of local praise he got for his speech, he may be on his way to success.