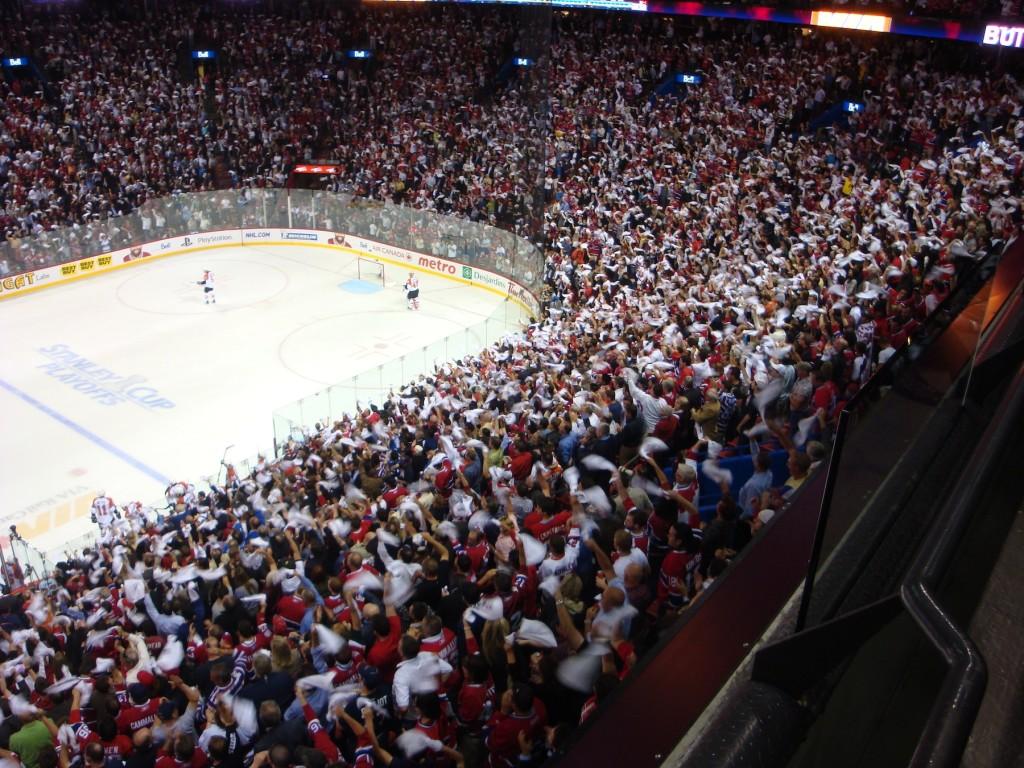 Sixteen teams will compete for Lord Stanley’s Cup in the 2014 NHL playoffs. These playoffs will be the first playoffs under the new conference realignment.

A new team to the Eastern Conference is the Detroit Red Wings. The Red Wings are in the midst of a complete team overhaul. They have drifted away from the veteran based team that has worked out very well for them in the past 20 years. The young guns on the Red Wings are Tomas Tatar, Gustav Nyquist, and Danny DeKeyser. Those three players have really helped the Wings make a playoff push when most of the the older, more experienced players were injured. In the past three years only one team has been more dominant than the Boston Bruins. The Boston Bruins have been to the Stanley Cup Finals twice in the last three years (won 2011 and lost 2013). They are led by good goaltending by Tuukka Rask and a fearsome defense. The Bruins are made up of big forwards and defensemen that like to bully their way to victory. This season the Red Wings have won three of four games against the Bruins; making them one of the only teams the Bruins have not been able to beat consistently. However, that should not matter in these playoff, Boston is too strong and too good for this inexperienced Detroit team.

Tampa Bay is one of the best scoring teams in the league. They are lead, this season by veteran Martin St. Louis, who has 61 points this year. Steven Stamkos played only 37 games this year due to breaking his right shin, but proved that he is still the best player on the team by scoring 40 points and being named captain. The Montreal Canadiens are not led by scoring like the Lighning. The Canadiens boast one of the best Goals Against average and Penalty Kill average. P.K. Subban is second in scoring for the Canadiens, which is quite surprising considering this young phenom is a defenseman. The Canadiens have several players who are hurt right now, including three forwards, which will make their scoring that much harder.

The Blue Jackets sneaked into the playoffs this year by making a strong late season push to claim the seventh seed. Last year Columbus made big moves by trading away their star player, Rick Nash. They did this in the hopes that a younger squad would make them more of a playoff contender. The Blue Jackets are seeing that move pay off right now, they have made the playoffs and have a legitimate chance to make a deep playoff run. They have one of the best all-around teams in these playoffs, ranking in the top half of the league in Goals For, Goals Against, Power Play Percentage, and Penalty Kill Percentage. Unfortunately for the Blue Jackets, the Pittsburgh Penguins happen to be in the top ten in all of those categories as well. Sid the Kid has exploded this year, scoring 104 points; proving more and more that he is the better center than Evgeni Malkin. Malkin is on the injury list right now, after hurting his foot against Tampa Bay. The only way the Penguins could lose to the Blue Jackets only if their depth players–or lack there of– are put to the test.

The New York Rangers have made the playoffs because of their defense and spectacular goaltending. Henrik Lundqvist and Cam Talbot have proven to be one of the best starting and back-up goalie pairs in the league this year. On offense the Rangers are led by a Norwegian right winger, Mats Zuccarello. Zuccarello has 59 points in 77 games this season, and has been especially good at sharing the puck (40 assists). The Philadelphia Flyers have made the playoffs once again, and have done so by being a great team with very few holes. One of those holes has been their goaltending as Steve Mason and Ray Emery both average close to three gaols let in per game. Proving yet again that he is a point a game player, Giroux is the best offensive player the Flyers have (86 points). The Flyers will have a tough time scoring against the arguably the best goaltenders in the league, but they will have to do it if they want to move on in the playoffs.

There are multiple storylines in the Western Conference of the National Hockey League heading into the playoffs. For starters, The St. Louis Blues, who were a definite cup favorite just a few weeks ago have slipped into a six-game losing streak. The Blues have been hit hard by the injury bug over the past few weeks. Star defenseman Alex Pietrangelo was marked day-to-day on an undisclosed injury after the Blues game on April 11. They also lost Center Patrik Berglund to a shoulder injury on the same date. The Blues have also lost countless other forwards, namely Vladimir Tarasenko and T.J. Oshie who aren’t expected to return until late in the playoffs. The Blues’ tale only gets worse when looking to their opponent, the defending Stanley Cup champion Chicago Blackhawks. The Hawks’ star duo of Jonathan Toews and Patrick Kane are both set to return for the Thursday night matchup against the Blues

The Colorado Avalanche have been a cinderella team of sort throughout this season. Led by rookie sensation Nathan Mackinnon’s 63 points in 82 games and star forward Matt Duchene’s 70 points in 71 games, the Avalanche have earned a 52-22-8 regular season record. Unfortunately, the Avalanche lost Matt Duchene to a knee injury and he is not expected to return until the second round. The red-hot Avs are matched up against a strong defensively-oriented team in the Minnesota Wild. This defense-first mentality will be essential to Minnesota’s possible success against a Colorado team that is one of the fastest in the league. The important part is that one of these teams is going to move on to the second round of the playoffs, which is somewhat of a big deal  to both teams, considering that Colorado hasn’t won a playoff series since 2008 and Minnesota hasn’t won one since 2003.

The Anaheim Ducks have been the league’s best offensive team this season. Following the lead of center Ryan Getzlaf (2nd most points in the NHL) and winger Corey Perry (5th most points in the NHL,) the Ducks have amassed the best record in the league, with one win more than Boston and two more than Colorado. The Ducks are up against the Dallas Stars in the first round, who also know a lot about scoring. Also led by a stellar center-winger duo, the Stars worked their way into the playoffs in a tough Western conference. Stars’ goaltender Kari Lehtonen is the biggest key to success for Dallas. If Lehtonen can hold up against the best offensive team in the league, this series will definitely be much closer than many predict.

In the fourth Western Conference matchup, in-state rivals San Jose Sharks and Los Angeles Kings face off in a repeat of the 2013 Western conference semifinals. The Kings, who won the Stanley Cup in 2012, are coming into the series with a stacked team. After upgrading at the trade deadline, the Kings feature Marian Gaborik, one of the leagues elite snipers, Anze Kopitar, the leagues 17th best scorer (8th among centers,) hard-hitting defenseman Drew Doughty and one of the world’s best goaltenders in Jonathan Quick. The Sharks aren’t strangers to stacked teams. Featuring three of the leagues top 20 scorers (Joe Thornton, Patrick Marleau and Joe Pavelski) the Sharks have no offensive woes. But where the Sharks have begun to struggle is in the net. Over the past two weeks, the Sharks’ number 1 goalie, Antti Niemi has been in hot water with head coach Todd Mclellan, especially after allowing 3 goals on 19 shots against Anaheim and then being pulled. All in all, this matchup has classic written all over it. Featuring two of California’s biggest Hockey powerhouses, this first round series will look and feel like a gritty conference finals series.