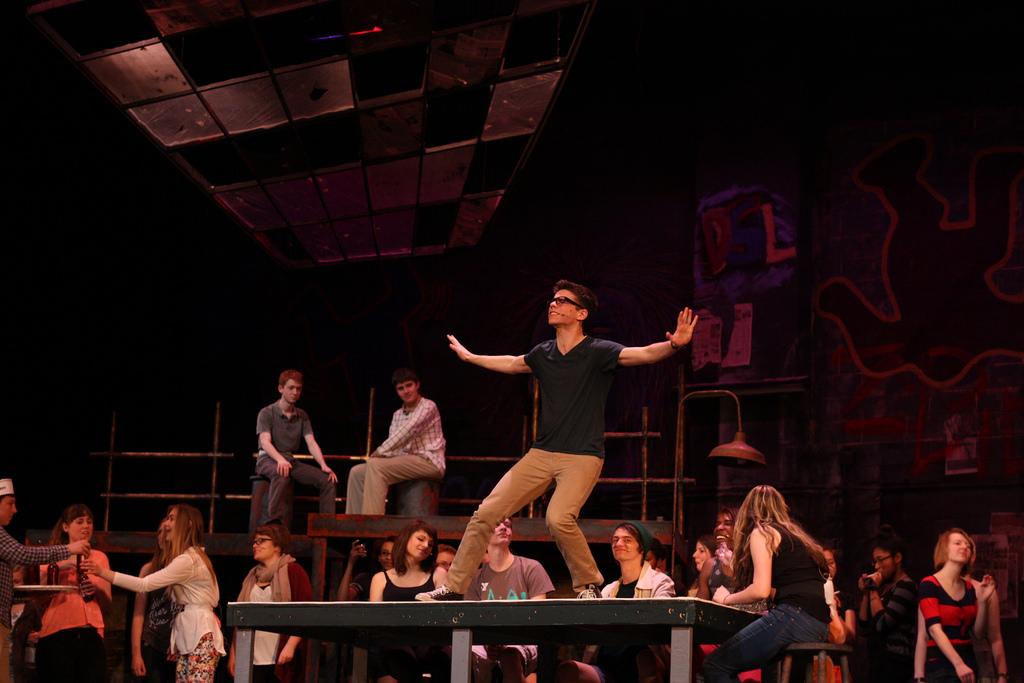 Zoom in on New York City’s Lower East Side, 1987. Tent cities and shanty towns inhabit empty lots, homeless people line the streets, and the entire community is living under the shadow of the rapidly spreading HIV/AIDS epidemic. This is Bohemian Alphabet City. This is RENT.

Pioneer Theatre Guild (PTG) brought the strife, triumphs, and love of Bohemia to life on Friday, April 25, in Schreiber Auditorium. The award winning musical by Jonathan Larson received critical acclaim in the 90s for the social movement it pushed to combat HIV/AIDS, progress LGBTQ rights, and for the voice it gave to the many individuals who were and still are suffering from persecution and disease.

RENT follows a struggling group of artists and friends, beginning on Christmas Eve, 1987. The show outlines a year of their lives and the hardships they face as their relationships and health rise and fall. This rock musical features a well-known soundtrack, including the sentimental song “Seasons of Love”, and the show’s liberal anthem, “La Vie Boheme”, giving the show its heart and soul.

Now, after an impressive 12-year run on Broadway, PTG students finally had the unique opportunity to express these important messages to the community.

A musical with such difficult subject matter is a tough task for a high school theatre troupe to pull off, but PTG was able to bring to life a deeply moving performance that stood on its own. Community High School senior Robbie Stephens played Angel Dumott Schunard, a cross-dressing street drummer. Angel, along with his three friends Tom Collins, Roger Davis, and Mimi Márquez, lives with AIDS. Although Stephens doesn’t share the same life experiences as Angel, he doesn’t feel that the character is too far out of his comfort zone.

“People have told me that Angel is very similar to me,” Stephens said. “We’re both very flamboyant, chipper, hyper, and sort of out there. We don’t really care what people say about us or what people think about us.”

Stephens eccentricity onstage was clear, accented by glittering colorful costumes and make up. But it was the chemistry between Stephens’ and Pioneer High School (PHS) junior Caleb Horvath’s (Tom Collins) characters that gave the show depth. Following Angel’s death in Act 2, Horvath gave a chilling rendition of “I’ll Cover You (Reprise)”, mourning the death of his lover and the promises they once made to each other with the entire cast. Horvath was committed to his character each moment he stepped onto the stage. Whether he was showing Collins’ goofy, loving, or heartfelt side, Horvath gave a truly memorable performance.

Remington Reackhof (Mark Cohen) and Nathan Stout (Roger Davis) sang us through the show with ease. The two opened the show with an impressive rock duet about their heat-less apartment and their inability to pay Rent, quickly escalating into a strikingly realistic ensemble number, featuring each member’s distinct character about the streets of Manhattan. Despite RENT’s demanding musical score, Reackhof and Stout managed to keep up an electric energy throughout the night, as was especially clear in their climatic duet in Act 2, “What You Own”.

While each leading role brought exciting elements to the production, it was the ensemble that drove RENT home. Ensemble members walked across the stage as if they lived there. Whether they were portraying mothers and fathers, lawyers and cops, AIDS victims, or homeless New Yorkers, they supplied enormous amounts of energy from the moment the curtain rose to the moment it closed.

“Everyone in the cast gave one hundred percent of themselves,” said PHS senior, Josh Lash (Paul, Drug Man). Lash has been involved in every PTG production since his freshman year, and believes that the cast and directors are the best he’s ever worked with.

“Our amazing director, Ryan Vasquez, has really put the burden of a good show on us, and has given us the tools we need.” said Lash. Vasquez is a musical theatre major at the University of Michigan, and is directing his first show at PTG. But great direction is only one key to the show’s success—another is a thorough understanding of the themes and messages.

“A lot of research went into the acting process,” said Lash. “We had a professor of LGBTQ history come talk to us about the AIDS epidemic and what that was like. It was a matter of really putting ourselves in the mindset of those living in Alphabet City, in New York, at this turn of the millenium, and how truly bad their life was.”

This journey of learning and creativity taught the students incredible life lessons.

“RENT taught me about relationships,” said Stephens,  “and about really cherishing the small things that people contribute to your happiness and all the experiences that you get to have while you’re still alive. Because, people do go. RENT taught me a lot about loving the people that I’m with.”

“The musical itself ends with the repetition of the phrase ‘no day but today,’” said Lash. “That phrase really means a lot to me especially because I’m leaving high school and I’m saying goodbye to all these people that I love. If I woke up every morning and I said to myself ‘no day but today’ I would live my life a lot differently and I think RENT has really given me the inspiration and the opportunity to do that.”

RENT is still playing at Pioneer High School’s Schreiber Auditorium this weekend, Friday 5/2/14 at 7:30 PM and Sunday 5/4/14 at 2 PM. Tickets are $10 for students/staff/seniors and $15 for adults. Assigned seating is available at showtix4u.com; general admission tickets will be sold at the door.