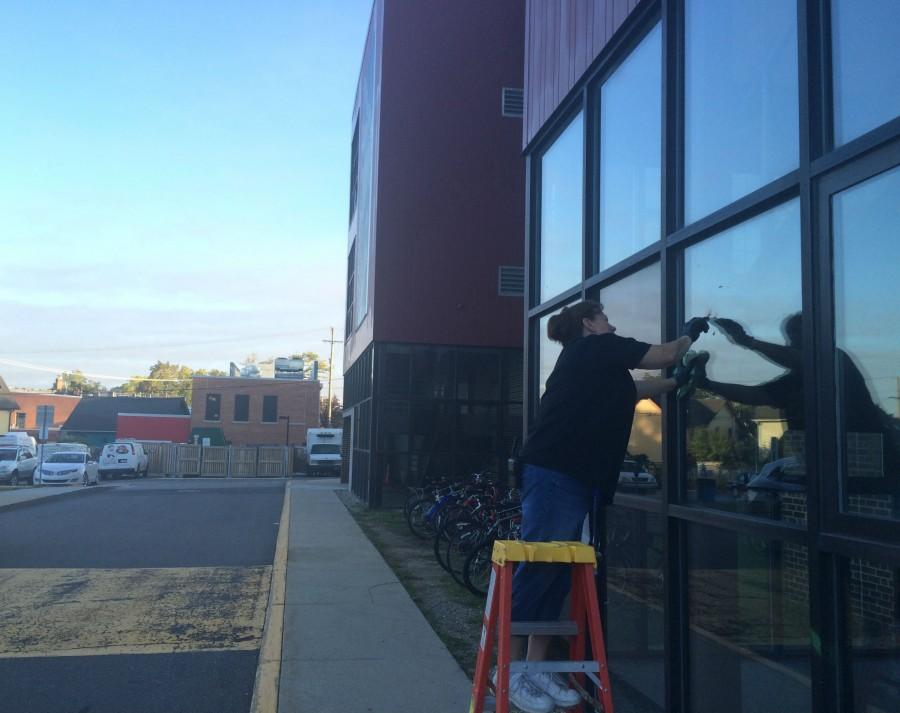 The vandals struck on the night of Tuesday Sept. 23, 2014. Multiple orange graffiti tags covered the back and sides of Community High School (CHS). In bright green, the words ‘I’m sorry’ were crudely spray-painted across the bottom right window of the South West staircase. Students arrived to school on Wednesday morning, filing in through CHS’s vandalized entrances.

“[The graffiti] was kind of jarring at first when I came to school… It was just very disrespectful thing to do,” Lydia Krienke, a senior at CHS, said.

Krienke was not alone in feeling this way, freshman Lia Kahan also expressed her frustrations. “I mean I think for a lot of people it is kind of ‘what can we do to get noticed?’ and they are getting noticed.” Kahan said.

Judith DeWoskin, a CHS teacher, has worked at the school for longer than most and has experienced attacks like this. “I don’t know what goes on in the head of somebody who does something like this,” she said.

DeWoskin is conscious when it comes to cleanliness. She regularly cleans her own classroom and is not afraid to call students out for being messy in the halls. “… I’m really kind of attentive in the hallways as well if kids are being disgusting with their lunches. But vandalizing the building, it’s just a whole other level. It’s not like throwing your sandwich wrapper on the floor. That’s bad, it’s stupid, it’s rude, it’s entitled, but vandalizing the building is really not ok.”

Within half an hour from the beginning of the school day, the spray paint was being scrapped off of the Windows. The custodian in charge of cleaning the graffiti off the windows was Susan Chapman. Graffiti removal is tedious, time-consuming work and the graffiti on the brick walls is especially hard to remove. “You got to put in a special order, special people need to come in. They need to come out, and that’s just more money and more time. I think kids don’t realize when they do something like this what’s involved.” Chapman said.

DeWoskin sympathizes with the custodians who need to clean up after the vandals. “That means our custodians overwork to get it off. And that just shouldn’t have to happen. To give a job like that to a custodian is just absolutely hideous.”

Community has suffered from a series of attacks just this year. From a smashed window in just the first few days and now this, CHS students like Krienke and Kahan and staff like DeWoskin just can’t wrap their heads around this. “It’s worse than childish … there is something really entitled and malicious because it’s someone saying ‘I have the right to do this and you can’t do anything about it’,” DeWoskin said.