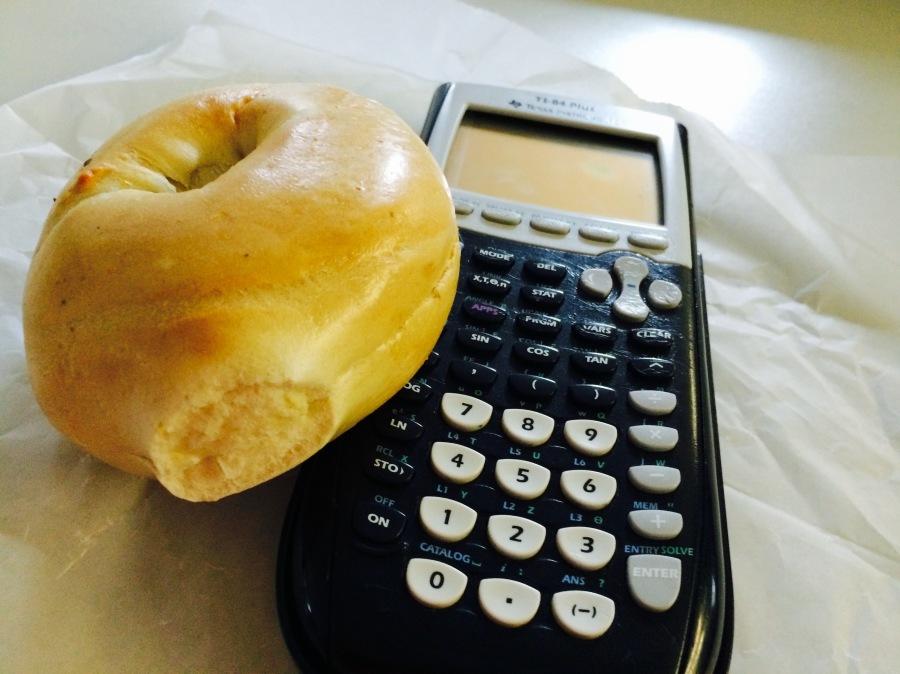 Before the 17 Community High School (CHS) students took the Michigan Mathematics Prize Competition (MMPC), CHS math teacher Anne Thomas brought in a mound of bagels, cream cheese, and plastic butter knives. Though the MMPC proved to be far more difficult than any math tests administered in CHS classes, many students felt that the most challenging problem of the morning was trying to cut the bagels with the plastic knives.

The 58th Annual MMPC was held on Oct. 7, 2014. The MMPC is a two-part math test competition held throughout Michigan. Anyone with $4.00 to spare can participate in the first round, where students have 100 minutes to complete 40 multiple-choice questions. CHS senior Marianne Cowherd, who has taken the MMPC all four years of high school, feels that while the concepts of the test are not remarkably advanced, the test requires reasoning of a higher level than is required for regular math tests.

“None of [the problems] are calculus-based. I think you only need concepts through Algebra II, or maybe a little bit of analysis to solve them,” said Cowherd. “But they’re a lot more difficult in terms of thinking process than a lot of questions that you’ll get in your math class. There are more trick questions dealing with theories and really large numbers.” The MMPC often tests reasoning skills over calculator skills by using problems containing the year that the test was taken; Cowherd noted that there were numerous questions involving numbers raised to the 2014th power.

If students answer enough questions correctly, they move on to a second round. This year, the cutoff was 17 correct answers out of 40. Six CHS students, including Cowherd, achieved this benchmark. The second round is of a completely different nature; there are only five questions, all of which are highly complex. “Each question is very long,” said Cowherd, who took the second test her sophomore and junior years. “It often involves proving everything. There are multiple parts to each question. A lot of them are very theoretical; they’re very difficult.”

Cowherd has developed a strategy for the first round over the years: “In the first round, you just try to get through all these questions. There are a lot of them, and you want to get them right, but you can guess on some. I always stop a minute early and fill in C for all the blanks.” Though the second round is more abstract, Cowherd has found that experience and general exposure to advanced math can be a benefit. “I’ve had more exposure to the kinds of questions that the MMPC asks,” said Cowherd.

CHS junior Jasmine Chang, however, feels that in many cases, the problems require so much reasoning that being at a higher level in math is not a major benefit. “I don’t think [skills learned in] analysis helps very much with that,” said Chang, who is also moving on to the second round this year. “It only helps with the most basic problems.”

The 100 students across the state with the highest scores receive an invitation to an awards ceremony. At this ceremony, the top-scoring students receive scholarships. For all but the most highly talented math students, the odds of earning a scholarship are infinitesimal. Chang, however, thinks that the benefits of taking the test extend beyond the possibility of a scholarship.

“I think it’s a good idea because it’s just a way to challenge yourself and see how much you know, and how well you can make educated guesses,” said Chang. And how good you are at taking standardized tests – very important. Because filling in bubbles is a skill!”

Chang thinks the MMPC offers a chance to practice other skills, as well. “Logical reasoning, and when you need to depend on your calculator,” listed Chang. “Sometimes, if you just depend on the calculator, it makes it a lot faster.

Chang also believes that the challenge of the MMPC makes it a fun and worthwhile endeavor. “Who doesn’t love a good math test?” she said.

Cowherd agreed: “It’s just really fun to sit around and do math.”