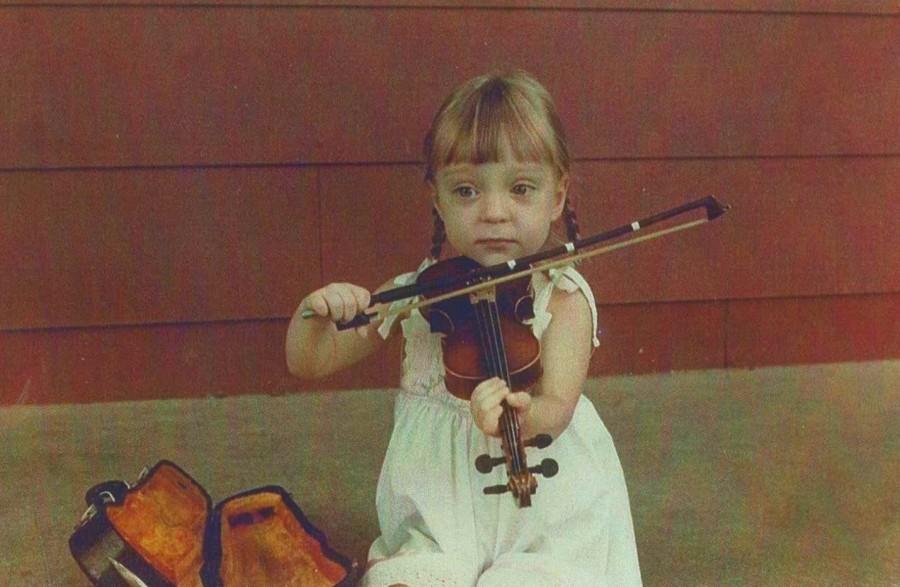 Doudna, age 3, sitting on the front porch of her Illinois home.

The silver Honda Civic lay flipped over on westbound I-94 near Parma Township, Michigan. The traffic came to a complete stand-still for hours as investigators scanned the scene and the line of frustrated commuters was directed accordingly.

It was July 26, 2011. Alicia Doudna and her fiancé, Andrew Kratzat, were victims of a severe car crash leaving both in critical condition. Kratzat was removed from the crash site by Survival Flight and taken to the University of Michigan Medical Center, where he began intensive care. Doudna was transported via ambulance to Allegiance Health and later flown to the University of Michigan Medical Center.

The morning before the accident, Doudna’s condominium had finally sold after months on the market. Her parents had rented an apartment in Baltimore, Doudna and Kratzat were ready to move there with her condo packed up. The move to Maryland never took happened, but in its place a miracle occurred.

Doudna lay in a coma for three weeks. She suffered from traumatic brain injury. After awakening, she had lost everything. Retrograde amnesia hampered Doudna’s recovery at first, but Doudna is a fighter, and she began making phenomenal strides towards her cognitive recovery. “It was similar to two things: it’s similar to birth and growing up, as well as similar to education. At first, you have little knowledge and as you grow you acquire more knowledge,” Doudna says optimistically. She feels that, ultimately, her musical experience was the key to her recovery along with the support of many amazing relatives and friends. “I’ve said this a million times: I really think music’s wiring in my brain helped save my life. I think music wires the brain differently. Music is amazing. It is incredibly positive and offers so many qualities of life.”

Doudna loves everything about playing the violin. She believes it adds beauty and positivity to the world. She loves that it is also an amazing form of communication. “It’s an excellent way of sharing emotions. Sadness, happiness, and reality. It’s a good way to cheer someone up, or to cheer yourself up,” Doudna says. “Briefly put, it’s a language.”

During Doudna’s recovery, her right arm was temporarily paralyzed. Playing the violin was a nearly impossible task. Some musicians visited Doudna in her hospital room, managing to get a violin into her hands despite her mother’s hovering protection. Despite barely being able to move one arm, Doudna–who moments before, could struggled to differentiate between a toothbrush and a shoe during cognitive therapy–began taking baby steps toward re-learning to play the violin.

Just three months after the accident, in September 2011, the Doudna family car pulled into the driveway of their new home. As she gazed out the back seat window, Doudna finally felt reassured and safe. Doudna had never seen the house before. In fact, she didn’t even remember signing the papers or leaving the hospital. But as the emotions started to kick in, she realized that none of it mattered, and she would be okay.

After her arrival home, Doudna continued her efforts to find more memories, and work with cognitive therapists. She worked five days a week at first, and then that was lowered to three days a week and eventually she found a balance of those and practicing her violin. She took violin lessons, and worked on some of the same work she worked on when she was in high school and college. One of her best friends since 2003, Gabriel Bolkosky, coached her along through her beautiful recovery. Every other month Doudna works with David Bowlin who teaches at Oberlin Conservatory. “Real professionals never stop learning from each other”, she says.

Doudna has always loved music. “I am so grateful for all of the benefits that music has given me throughout my entire life,” she says. “Music is just really cool. Its not just that I like it, its one of the most miraculous and beneficial things in the world”

Doudna and Kratzat talk at least once a day, and see each other once a month. “The love is still there and we hope and dream that things will work out. Life is an open door.” Alicia is inspired by love and family. “Although we aren’t biologically related, Andrew inspires me.”