Living on Key and in Color 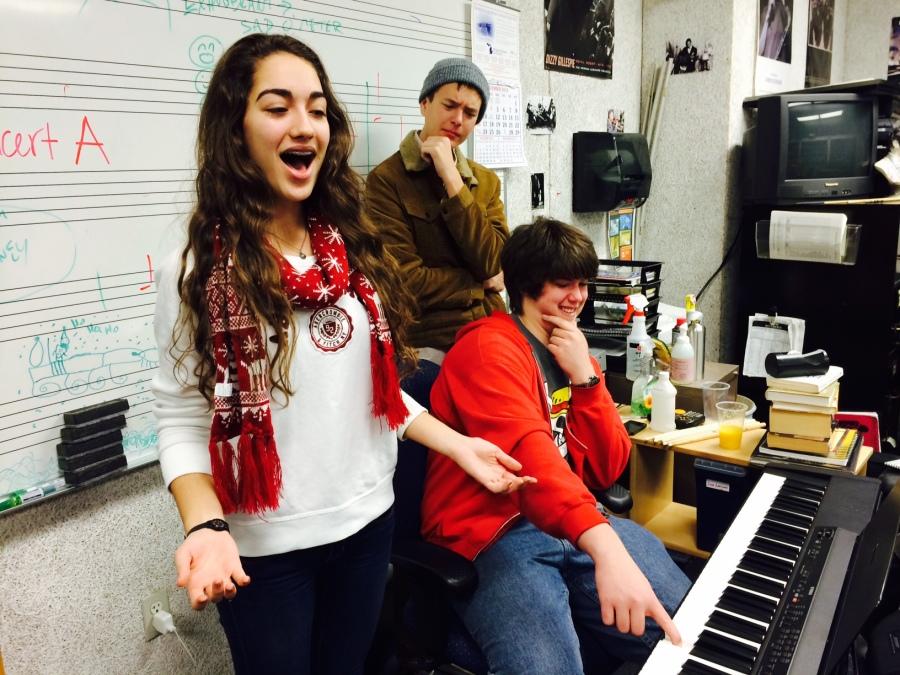 Those with perfect pitch can easily name the notes that they hear, while leaving others confused.

“You’re three cents sharp,” Dr. John Pasquale, Director of the Michigan Marching Band, said as he picked out one trumpet player specifically from the Pioneer High School Symphony Band. Three cents is only three percent of the full measure of a music interval between two notes. He left the band in awe because of his ability to notice such a small detail. However, Pasquale does not naturally have the ability to recognize pitches just by listening; people with perfect pitch do.

Perfect pitch is an unusual auditory condition that enables people to name musical pitches after hearing them, and to recreate that note. It is also referred to as absolute pitch, or AP. It may allow people to correctly determine the keys of chords and pieces, or even give the note created by everyday, non-musical objects like alarms. Studies attempting to determine the percentage of people who have perfect pitch have ranged wildly in results, finding that anywhere from one in 10,000 to 32 percent of people may have perfect pitch.

Perfect pitch can be an extremely useful ability to have in the music world. Kai Hoffman, a junior at Pioneer High School, has perfect pitch. Through her own experience she concludes that it does indeed help her play better.

“Perfect pitch really helps when I am first learning a piece,” said Hoffman, a trumpet player in Pioneer Symphony Band. “When I play a note or chord, I know if it’s right or wrong pretty quickly.”

Pasquale, on the other, cannot imagine living with it. “To be honest, in musical performance, what is actual pitch versus things being in tune are completely different … everyone is playing to each other. It sounds in tune to us, but the center of pitch could be 443,” he noted. “To [a person with perfect pitch], that three-cent difference could be shocking. Trying to put past what your brain is telling you what is correct or not, to the overall good of the artistic goal and product, how do you make that adjustment?”

Hoffman also acknowledges downsides of perfect pitch. “With perfect pitch, I can tell when I am sharp or flat while playing high notes on the trumpet, and it’s irritating when I am not in tune,” she said. “Also, when I listen to others play an instrument or sing or something, I know when it’s out of tune, so enjoying the music a hundred percent  of the time is at times kind of hard.”

Perfect pitch is not the only phenomenon that makes musical listening an entirely different experience than to those with average ears. Synesthesia, for instance, is a rare condition in which perceiving one sense leads the brain to activate another sense. A common example of synesthesia is hearing musical notes activating visual senses in the brain. This allows people with synesthesia to perceive colors along with musical notes.

“Synesthesia” in the literary world is the usage of words to combine the senses. An example is from Emily Dickinson’s poem “Dying”:

Between the light and me;

And then the windows failed, and then

could not see to see.

She uses synesthesia to combine the color “blue” with the sound “buzz.”

Synesthesia is, according to most studies, a much more unusual phenomenon than perfect pitch. Only 11.5 percent of people participating in the poll have synesthesia; interestingly, more than half of them are in band.

Allen Chang, a senior at Huron High School, is one of these few people with synesthesia. He finds listening to music a highly sensory and stimulating experience that he believes may be very different from that of a non-synesthetic listener.

“I might enjoy music more than others because it’s engaging my visual sense as well as auditory,” Chang said. “But I can’t be sure because I don’t know what music sounds like without colors.”

Chang’s synesthesia has other benefits, as well. “I can identify pieces of music quickly and accurately,” said Chang, who plays clarinet in the Huron Symphony Band, and also plays violin. “For example, different composers use different amounts of colors, and if I’m familiar with a particular composer, then I can probably identify his work with pretty good accuracy, even if I’ve never heard that piece before.”

He has also noted downfalls that come with his synesthesia. “The most obvious con for me is that I absolutely suck at transposing, because if I play something in a different key it sounds and ‘looks’ completely different,” Chang said. He also believes that his reliance on visual and sensory aspects of his music might detract from his ability to interpret a piece from a technical standpoint, and adds that no one in his family has it.

With enough practice and exposure to music, people may even be able to develop ears almost as musically sensitive as anyone with an auditory marvel. Pasquale does not have either perfect pitch or synesthesia, but he has been able to train his ear to the point that he can pick out the individual musician who is playing just a hair sharp.