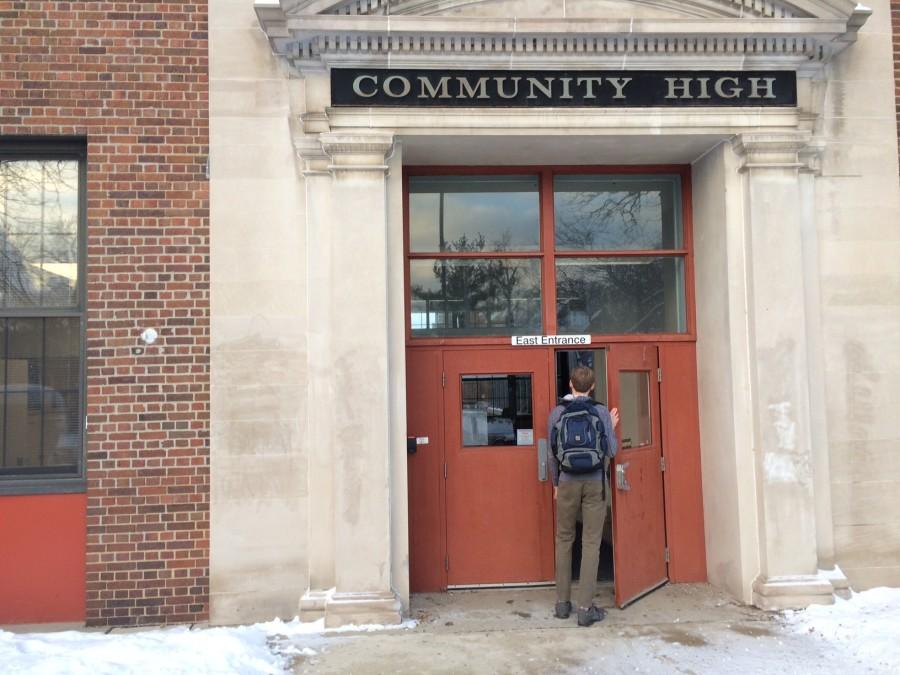 When Matthew Ferraro picked up his phone on Tuesday, Dec. 9 to read his texts, he did not expect to be receiving any big news. He checked a message from his father, and without warning, emotions flooded in and back out as tears as he cried with joy; he had finally been accepted to Community High School. The vast majority of Ferraro’s class at Community was accepted as freshmen, but Ferraro had been waiting for two and a half years to enroll.

Until this year, Ferraro had been enrolled officially at Pioneer High School, but almost from the start he felt that he did not belong there. For his elementary and middle school years, Ferraro attended Ann Arbor Open, whose environment of intimate relationships between teachers and students is similar to that of Community High School. It too is a small school by comparison to other middle schools in the Ann Arbor Public School district. Peter Ways, Community High School’s dean from 2006 to 2009, currently teaches seventh and eighth graders there.

Ferraro felt that something was wrong early in his high school education, but it was not until a foreign exchange trip that he truly realized what was wrong.

In 2012, Ferraro went with an exchange group to Japan.

“After I came back, everything just sort of went downhill from there,” Ferraro said. “I felt that I did not belong at Pioneer, that I did not want to stay here, that I didn’t really like it. So I knew I wanted to do something about it, [and] I decided to split enroll with Community the next year, and see where it goes from there.”

It was by complete chance that Ferraro met Tracy Anderson.

“When I started to split at the beginning of sophomore year, Powerschool decided to drop my entire schedule on the first day of school,” Ferraro said. “The counselors were pretty sympathetic though because apparently that happens often.” In the end, Ferraro was enrolled in better classes than he had chosen earlier, including Introduction to Journalism with Anderson.

“[Anderson] has had a very big impact on my life since then, and Journalism has been a really great class,” Ferraro said. “I’m glad I found it.”

For three semesters, Ferraro split enrolled, and loved all of the classes at Community because the environment propagated by enthusiastic teachers and engaged students made him feel at home.

Even though Ferraro is officially a student at Community High School as of second semester, his schedule won’t change much due to academic, athletic and artistic involvement at Pioneer. Ferraro is a member of the Pioneer Rowing Club and Pioneer’s Concert Band, and remains an asset in all of his classes; though his Pioneer friends are happy that he has gotten into the school of his dreams, they will hate to miss him.

“All of my friends at Community are really excited for me, and so are my Pioneer friends, but I know that one of them was like ‘You better still be in this class next semester!’” Ferraro said.

Now that Ferraro is at Community, he is excited to be a part of its traditions and quirks, but is most looking forward to a forum. He wants to participate in Field Day at the end of the year, especially the tug-of-war. Because he is still taking classes like Band and Chemistry at Pioneer, he expects to be a part of a lunch forum. Whichever forum Ferraro finds himself in, he is not worried: “All of the teachers are pretty great, and usually the students are just as good.” Ferraro said.

One of the first traditions in which Ferraro partook was Community’s alternative registration on Dec. 19. As if a throwback to his former fiasco with class deletion and subsequent amelioration, Ferraro did not have a number, so he was given 11B. Compared to the registration at Pioneer, the process was exhilarating.

“I like that you get more of a decision in choosing which classes you take here,” Ferraro said. “At my old school, you just filled out a form and you had to fill out certain classes depending on your grade so there weren’t that many options … But this was very exciting, and you got to see the teachers before even taking their classes, which was pretty cool.”

Ferraro is excited to be able to spend more time in diverse classrooms; he prefers an environment in which students of all ages collaborate to produce the best classroom setting possible because the benefits go both ways. “It’s important because it helps younger kids see how older kids behave themselves,” Ferraro said. “In turn, the older kids get a chance to be surprised by things that the younger people have to say.”

For Ferraro, there was no looking back when he learned of his acceptance into Community High School. “I knew that the moment I got that text, there was no question,” Ferraro said. “I want my transcript to say that I graduated from Community.”