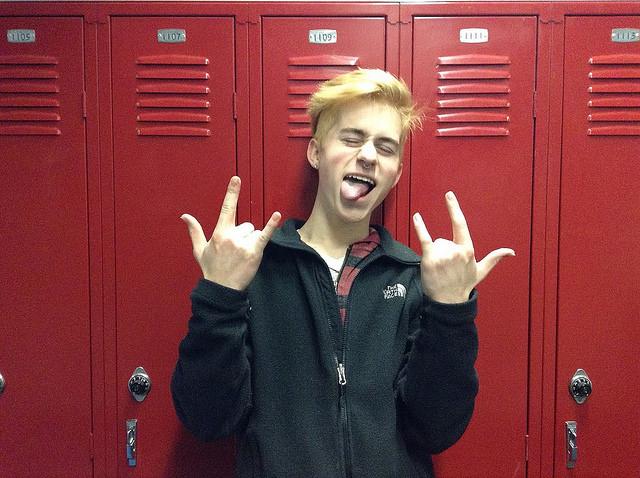 Weightless. Conor Martone feels weightless. He recently underwent a drastic haircut — from shoulder length to close crop. His new look had been in the making for a long time: “I said a year ago that I would get my hair cut in a year, so I did,” Martone said. Pleased with the experience, he plans on cutting his hair once more before prom. After that, Martone plans to grow it out for another year.

Inspired by television host Rachel Maddow’s short style, Eve Zikmund-Fischer had decidedly found the major chop she craved. One sizable downfall: cutting off so much hair would force her to make some wardrobe changes. The medium bob she had previously sported had doubled as a protector of cold ears. And with winter in full swing, Zikmund-Fischer was hesitant about making the cut. After much thought, she realized there should be nothing holding her back from being happy with her hair. “I would rather have a hairstyle I really like and have to get extra accessories to stay warmer than be stuck with hair that I really just don’t want,” Zikmund-Fischer said.

Sarah O’Connor considers herself a confident person. Nevertheless, she was nervous about how people would react when they laid their eyes on her lavender locks. In recent months, purple hair has spread like wildfire both in the fashion industry and on the streets. At first, O’Connor was worried that her peers would see her choice solely as an attempt to follow the trending tint. But her doubt was swiftly shed. “When I got the validation that it looked good it like took my confidence to a new level,” O’Connor said. “I think it’s a trend for a very good reason- because it looks good on a lot of people.”

While O’Connor thoroughly researched her idea before dedicating herself to heliotrope hair, Hannah Simon made a snap decision. “She [my mom] said ‘Just get a trim,’ and I was just thinking I wanted a change,” Simon said. “So I just randomly chose to get bangs once I was sitting in the chair getting the haircut.”

Simon had only just started to make big changes regarding her hair. Maintaining a long mane for a few years, she tried something new last summer with a shoulder-length cut. After letting the shorter style grow out, Simon had felt ready for another hair adventure, but not specifically bangs. Although Simon still feels a small sense of regret towards the split-second decision, she flaunts her face-framing fringe with an air of cool confidence and obvious optimism. “I like it,” Simon said. “I just have to get used to it.”

Griffin Hall’s hair has been on an evolutionary path since middle-school. Going from a flippy “Justin Bieber” look, to putting it up, to eventually shaving the sides of his head and bleaching his hair. It took him a couple of tries to get the dye right and while it may not be that perfect shade of yellow to Hall right now, he’s happy with it.

Hall came to the conclusion that his hair needed a change similar to Simon’s process. “I had the idea in my head and I just wanted to do it,” he said.

Hall changed up his hair with the help from his friends in the comfort of his bathroom. While some people have been known to experiment in the safety of their home when changing their hair, others turn to professionals. Zikmund-Fischer went to the Regis Salon and Simon visited a new stylist for the first time after a recommendation from a friend. Martone switches up where he goes by whichever one is convenient for him to visit. It boils down to going to wherever provides the most comfort when going for the chop.

All five students understand first-hand that hair has the ability to be more than just follicles growing on their heads. “It’s kind of empowering to know that you don’t have to be stuck with one way of styling your hair based on your gender, or your age,” Zikmund-Fischer said. “You can do whatever you want.”

O’Connor feels the same way, “I would recommend it to anyone. It’s really liberating,” he said.

“Why not experiment?” Hall asks. He believes that people should take chances in their life since they only have one to live — no matter how “YOLO-ish” that may seem.

Their advice to anyone contemplating a new ‘do: go for it! Hair will always grow back the same way that new trends are always taking off. Try it if there’s an interest to do so. Most importantly, don’t let the potential of negative feedback from others discourage curiosity.