Humor and Health, “Take 2 Jokes and Call Me in the Morning” 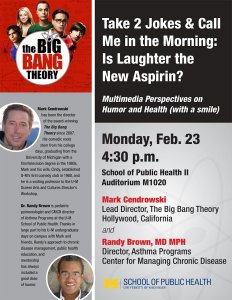 The modern barrage of cons for watching TV can now be countered by the number one hit comedy in the United States: The Big Bang Theory. When people sit down to watch the show, they forget their anxieties and sympathize with the characters. They can relate to the show, but they may not know that humor could have extremely beneficial effects on people– a laugh a day could be just as good as an apple to keep the doctor away.

The public health field envelops a broad variety of studies. Recently a new one relating humor and health discovered that laughter can be used as a prevention method for incurable diseases and elevate moods. Still, it has not been implemented in the medical world because it is such a fresh idea.

In the auditorium of the University of Michigan’s Public Health building, three speakers gave a talk on the the relationship of humor and health. The first, Dr. Randall Brown, Director of Asthma Programs at the university, presented a slideshow on the social responses to humor ranked smirking, giggling, chortling and laughing to convulsing. He proposed an interesting question for the audience to marinate on: would it make sense for healthcare professionals to use humor as a treatment?

Humor and laughter can cause relief from depression, and in an abstract by the National Center for Biotechnology Information, laughter was proven to boost natural killer T-cell activity; this means laughter actually builds immune system strength and can prevent diseases.

The slideshow progressed to the background of the next speaker, which kindled the eagerness in the audience to welcome him to the stage. He was the formally dressed (but with a peek of mustache socks) University of Michigan graduate Mark Cendrowski and director of The Big Bang Theory.

The Big Bang Theory is not only the number one comedy show in the United States, it is widely popular around the world. Cendrowski believes everyone can connect to the show by connecting to its characters and benefiting from its humor. He remembered the time when a woman’s, who was recovering from a stroke, motivation to get better was knowing she had to be strong to come to the set of the show.

The show is connected with the “Make a Wish” Foundation, an organization that grants the wishes of children, and has invited the Sunshine Kids, a non profit organization dedicated to children with cancer to visit a live taping of an episode. He mentioned how much the humor impacted them and how much their spirits were raised.

The third speaker, Marc Jaffe, a well-known comedian and writer, has integrated humor in his and his wife’s life. After his wife was diagnosed with Parkinson’s disease, he began to turn the negative aspects of it into comedy.

“We laugh at our own diminishment,” he said. “How can we do that?”

Even so, he has done that by creating a group, “Shaking with Laughter,” that presents comedic events to raise funds for Parkinson’s disease.

All of the speakers believe that humor can be used as a form of prevention. “There is still a lot to learn, and it is up to us in public health to force the medical schools to do something,” Dr. Brown stated. The future could include apps that provide the correct dosage of humor a person, and prescriptions could be composed of laughing a certain amount. Whether it’s watching clips of the Big Bang Theory every day, or listening to a comedy show in the car, humor is a good addition for a healthy routine based on opinions of the speakers and studies.

“I’ve seen people, I saw visible proof of someone who had gotten better because of laughing,” Cendrowski said. “I don’t know if you can gauge [humor] with a number per se but it’s definitely something that happens.”