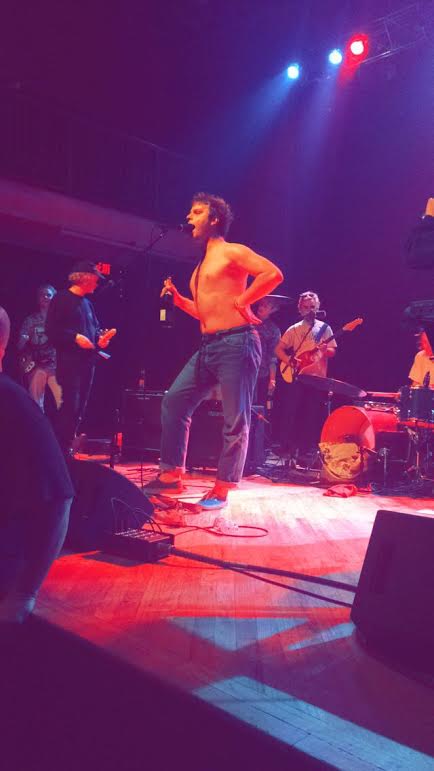 Mac Demarco took the stage for the encore of the band's last date of their North American tour holding a bottle of champagne and wearing nothing but his signature cuffed blue jeans and vans.

Nov. 8, 2015 — a myriad of 17-year-old hipsters lined the streets of Pontiac, Mich. waiting to get into Mac Demarco’s show at the Crofoot Ballroom.

The 25-year-old out of Edmonton, Alberta released his EP, Another One, in early August of this year. The eight-song album introduced more synth-based slow jams and love songs, which is a change from the consistent upbeat guitar riff style present in the majority of his previous songs.

Demarco has gained a lot of momentum in 2015 with an ever-growing fanbase. He and his touring band headlined at a number of festivals all over the world, including Pitchfork in Chicago.

The band has a tradition of finishing the main set with Still Together off the 2012 album, 2.  This final act features a break towards the end of the song when guitarist, Andy White, goes into the long solo and Demarco jumps into the crowd and surfs. At the Crofoot Ballroom on Sunday this was act was not absent. In fact, Demarco made it to a post that he climbed up, leading him to the outside of the balcony. Demarco clung on to the railing as he walked slowly along the entire border, then as he finally got the other side he made his way down the opposite post and surfed his way back to the stage. However, before he made it back, I didn’t miss an opportunity of grabbing his butt, which is not an unfamiliar experience for Demarco during his sets when he surfs.

Following the main set, drummer Joey McMurray, came back out on stage to start off the encore. He told the crowd that he was going to play a beat while the crowd chanted “Jon Lent,” the name of Demarco’s new keyboardist. He ended his beat prematurely and hopped up to the microphone and said, “Sorry, that was dumb.”

Demarco then came back out to the stage wearing nothing but his signature cuffed blue jeans and his blue vans, holding a bottle of champagne, ready for the encore. Demarco, an avid Steely Dan fan, played their 1972 hit Reeling in the Years turning it essentially into a ten minute jam while the crowd went nuts.

After an exhausting set for the last show of their North American tour, Demarco and his band wrapped up the last jam and exited the stage saying goodnight, but they didn’t do so before asking the crowd if anyone knew of any house parties after that they could go to following their departure from the venue.