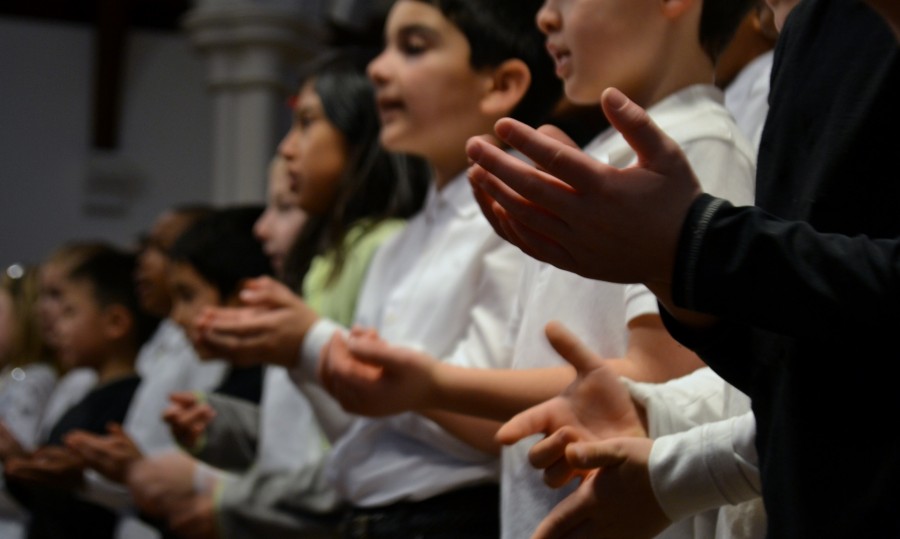 As the high school students entered St. Andrews, young children were already seated facing them. Nyah Sclassie opened the assembly with a poem, and the emcees—Clarence Collins, Elonah Kirk, Ken Simpson and Eva Rosenfeld—officially began the assembly, and introduced the theme: Youth and the Power of Change.

After another poem by Avery Farmer, Community High teacher Brandon Jackson spoke about his idea of Martin Luther King Jr.’s dream and how to make it possible. “Number one: you have to allow greatness in your life. You have greatness in you,” Jackson said. “Number two: you have to believe you are great. A lot of times we look outside for inner confidence,” he continued, listing three more points. “Number five: recognize your greatness and give your greatness back to your community. I look forward to giving greatness back to my community.”

To emphasize the power of youth in change, Dean Marci Tuzinsky welcomed the third grade class from Dicken Elementary School, and their principal, Mike Madison. He spoke about what each grade would be doing at school, in honor of King and equality. The kindergarten class hit him hardest in his heart: they would be cracking brown and white eggs to see that on the inside, they are the same. “I bring to you youth and they are here to change the world,” Madison said. “At a young age they are learning equality.”

The third graders were led up to the front of the stage to perform a musical about King’s dream. Some were beaming, and adorned with sparkly skirts. Some were quiet, but all were enthusiastic without worrying about how others would think. Not a single one of them gave less than 100%. They sang about peace and unity, and when they finished, the whole audience stood up and cheered them on.

“Can you see why I needed to bring them to you?” Tuzinsky asked.

After the performance, Patricia Manley, a former student of Community High’s old identity, Jones Elementary School, mused about her experiences. “We didn’t have the opportunity to come over here for an assembly,” Manley said. “Our assembly was in the auditorium that’s still there at Community High School now, and my kindergarten class was in the room where you now have fitness machines. As I’ve said, at Jones, it was all of us who lived in the same area which was primarily African American … But it’s so much better now, and we have so many opportunities, so I hope we can take all of those opportunities and make this world a better place. Remember that Martin Luther King Jr’s life was for unity, not diversity.”

MLK Assembly from The Communicator on Vimeo.