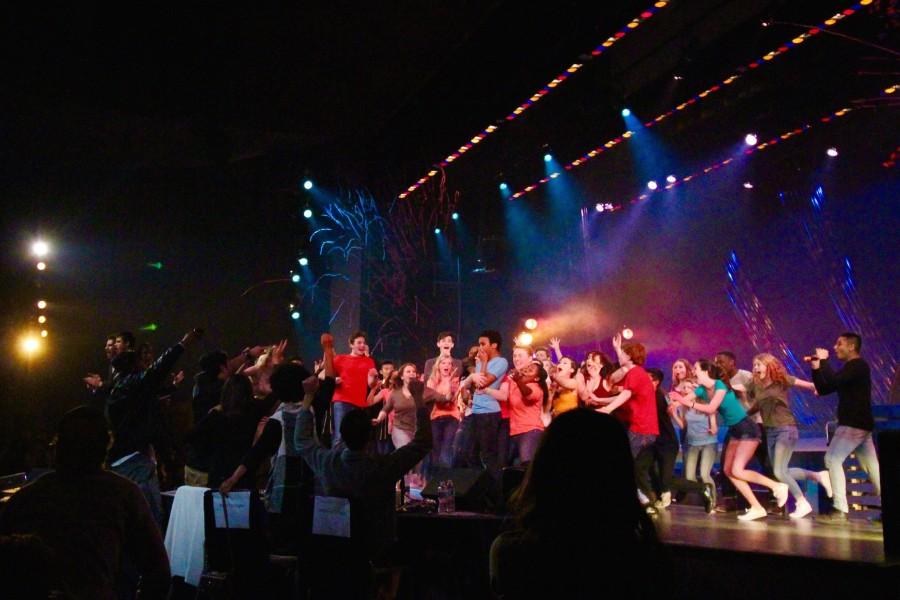 Doughten-Priska processing the news that he won FutureStars 2016. 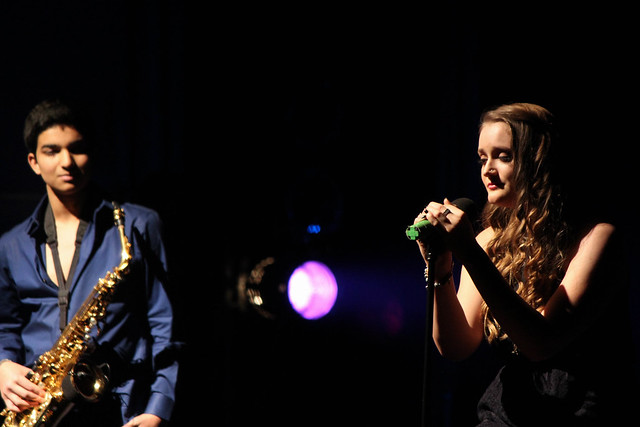 “SOLD OUT” signs were plastered on the doors of Pioneer High School. Security guards, screaming students and sparkling performers all gathered at the school on Saturday, Jan. 23  for the 14th Annual FutureStars Finals competition. A steady trickle of friends, parents and other enthusiasts filled Schreiber auditorium. The lights flickered and the six hosts walked upon the stage with elegance: the guys strutted free tuxes from Men’s Warehouse, and the girls strode in shimmering gold or bodycon black. “Welcome to FutureStars Finals,” Host Wouter Ritsema announced.

The judges for this year’s show were Matthew Altruda, host of Tree Town Sound 107.1 FM, Sadie Yarrington, graduate of the School of Music and Dance at University of Michigan, Ashley Park, Pioneer High School graduate and principal role in Broadway musical “The King and I,” Drake Johnson and Jehu Chesson, football players for UM.

The night began with the Rising Stars singing “Ex’s and Oh’s” and was followed by Sarah Michelson, Lonnique Brewer and Elise Crause singing “Hound Dog.” A loud applause filled the auditorium but quickly fell silent as the next act was up. Nathan Stout appeared on stage with green stage lights shining, and anticipation in the air. They waited for his first note. “Jessie is a friend,” rang out and the audience immediately recognized the iconic song, “Jessie’s Girl” by screaming. Following Stout’s act, Alexa Zielinski performed “Ship to Wreck” and Jonathan Lynn on saxophone and Brendan O’Bryant performing “It’s Not Unusual.”

Plenty of other outstanding performances went on throughout the night but one definitely stood out to two of the judges. “Over the Rainbow,” performed by Lizzie Riles, filled the crowd in awe, including Johnson and Chesson. The two judges said that they would hope to hear Riles’ voice when they went to heaven.

DOZ’s breakdancing beckoned a place in the top five with their performance. Seniors Justin Hsu, Alvin Wang, Daniel Yoo, Jae Chan Hwang and Chris Chung energized the crowd with their upbeat selections, one of which was Uptown Funk, and quick techniques. Lynn and Julia Hale wooed the audience with a saxophone-voice duet of Bob Dylan’s “Make You Feel My Love,” which induced the members of the audience to use their phone flashlights as candles, and wave them in the air.

Many other acts received ravenous applause and cheering, like Nia Blair singing “Earned It” and Community’s own Kaleb Doughten-Priska dancing to “Crazy in Love” with the bass so high it was living in the audience’s chest. “I know nothing about this, but I feel if you pursued this as a career, you would be extremely successful,” Johnson commented. While the judges were nominating the top five, the coaches performed their own number, and were followed by a company number. Marisa Leach, a host, noted that the coaches deserved praise too: “[They] helped many of the performers immensely because they chose the songs that that are really comfortable to the singers and can challenge them in the range and help these kids, some of whom want to pursue musical theater, showcase their talents,” she said.

Doughten-Priska was eventually nominated for one of the top five spots, and won the whole event. “I don’t think it just happened,” Doughten-Priska said. “I don’t know what I’m feeling. I’m crying, I’m smiling, it feels weird.”

However, FutureStars is not just special to the people who are performing to compete. “I’m so thankful to have been given this opportunity not once but twice and the lessons I’ve learned from it are really invaluable,” Host Basil Baccouche, wrote. “It’s always a ton of work behind the scenes as a host, you have to memorize, write, memorize, write and then you find out there’s still more to memorize, but it’s so rewarding to go out there and see the crowd kept alive and hungry for more performances.” The talent in the show was not just concentrated in the performers– from sets to sound the expertise was evenly distributed. “[Sound crew] was definitely stressful, as we have to make sure every performer has the right color mic, and that the mic stand is adjusted to their height,” Carolyn Corey, member of sound crew, said. “Putting a mic on stage looks super easy, but it’s somewhat terrifying because if you put it in the wrong place the performer could be thrown off, and the lighting could be wrong. The whole performance could suffer.”

After the top five acts were called up, the audience voted for the winner by the amount of the noise they made, and the decibel reader in the sound booth determined the winner. Doughten-Priska was enveloped in a cast-group-hug, red and blue confetti and wild screams.