“Just Not a Math Person”

Why do so many high school students hate math? 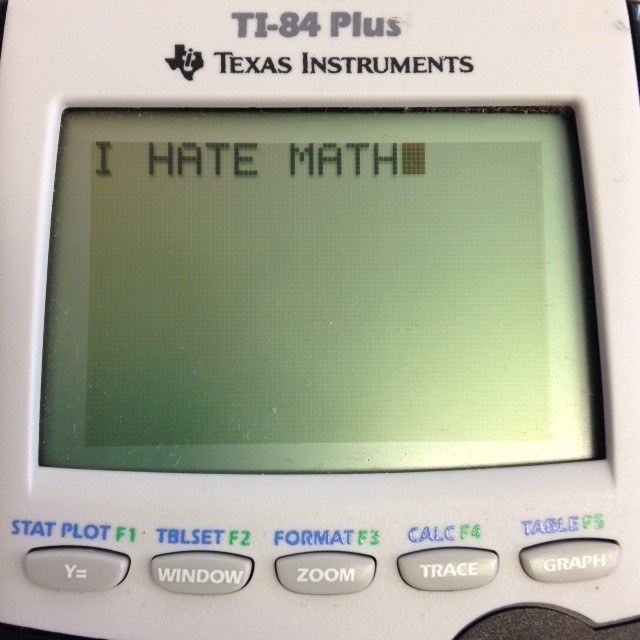 In a poll of CHS students, nearly half rated their enjoyment of math under five on a scale from one to 10.

Sanelma Heinonen only worked at Kumon for one day before quitting. Heinonen, a Pioneer High School senior, describes math as beautiful, but felt that the teaching she saw that day only taught kids to dislike the subject. “I just hated seeing what they were doing to the kids,” Heinonen said. “They had to do pages and pages of repetitive arithmetic problems, and if even one was marked ‘sloppy’ they would need to redo the entire page.”

An aversion to math is a very real phenomenon among high schoolers. A Google search for “math anxiety” turns up nearly three million results, including a Wikipedia entry with 12 parts. In a poll of CHS students, approximately half rated their enjoyment of math a five or lower on a scale from one to 10. There is definitely a math problem; does it have a solution?

CHS senior Jasmine Chang considers herself a math lover. After spending first semester as a teaching assistant in a geometry class, however, she noticed a variety of reasons why her students struggled. Chang believes that a lack of competency in basic arithmetic holds back many students. “If people have to take a really long time to figure out how to multiply something, that can definitely hinder their progress,” Chang said. “So if they constantly have to take a really long time to multiply 14 x 15, that will really slow them down. They wouldn’t enjoy it as much.”

Chang reasons that improving rudimentary math skills in elementary school would help students enjoy math. “People didn’t necessarily come out of third grade or fourth grade knowing how to multiply just like that,” Chang said. She has found that when students can perform arithmetic quickly, their endurance in math homework improves.

Practice is necessary for this improvement, according to Chang. “Solving problems is like practicing an instrument,” Chang said. “You have to do it every day to keep the skill there. Otherwise, you’re going to forget how to do things. I think a lot of people only do the math homework assigned, which isn’t a bad thing, but if you don’t do the math every day, it will deteriorate.” She acknowledges, however, that too much rote memorization poses the risk of “training kids to be robots.”

Heinonen agrees that it is necessary for students to be comfortable with certain math skills, but is more skeptical about intensive math practice. “Trying to do calculus without having a good understanding of how to multiply fractions or work with exponents just isn’t going to work,” she said. “But on the other hand, excessive rote practice is what turns a lot of people away from math, because rote practice is boring.”

Heinonen thinks that the current math curriculum is not conducive to teaching kids to enjoy math. “Most people see learning math as just plugging numbers into formulas, which is a lot of arbitrary memorization,” she said. She finds that attempts to connect math to “the real world” fall flat.

“Our math book says dumb stuff like ‘bungee jumpers use geometric sequences to calculate how high they will bounce,’” Heinonen said. “That is just false. Bungee jumpers do not do this. We shouldn’t tell students that they need to learn math so that they can use it to calculate how high they can bungee jump or something equally dumb, we should show them that math is worth learning for its own sake.”

After taking two math classes at the University of Michigan, Heinonen concluded that even at the university level, her enjoyment of math classes depended largely on her professor. “I think the best way to get students interested is to have engaging teachers who love math themselves,” Heinonen said. “When interesting topics are presented in a boring way, of course students will find them boring.”

Both Chang and Heinonen believe that math is a more creative subject than is commonly perceived. Chang draws parallels between the skills needed for math and the arts. “Math is definitely less associated with creative works like writing or art,” Chang said. “But if you think of it like, if you’re playing a piece of music, you also learn by second nature that eighth notes are half of quarter notes.”

“Whoever made the unit circle was pretty creative too,” Chang added. “There’s a lot of pattern recognition. And if you look at a piece of music or a piece of art and you find repeating themes through it, it’s kind of like that. You start to recognize patterns within the math realm.

Heinonen grew up in a household where she was exposed to topics in math that are quite different from the public school curriculum. She believes it is important for students to see math as more than number-crunching.

“Math isn’t about plugging numbers into formulas, it’s about inventing whatever rules you want for your world and then seeing what kind of world that is,” Heinonen said. “An analogy I often use is music: music is very beautiful, but if all we were taught is how to read music and clap rhythms and the names of complex chord progressions, I don’t think Ann Arbor’s music programs would flourish the way they do.”