100 Years of People in Parks 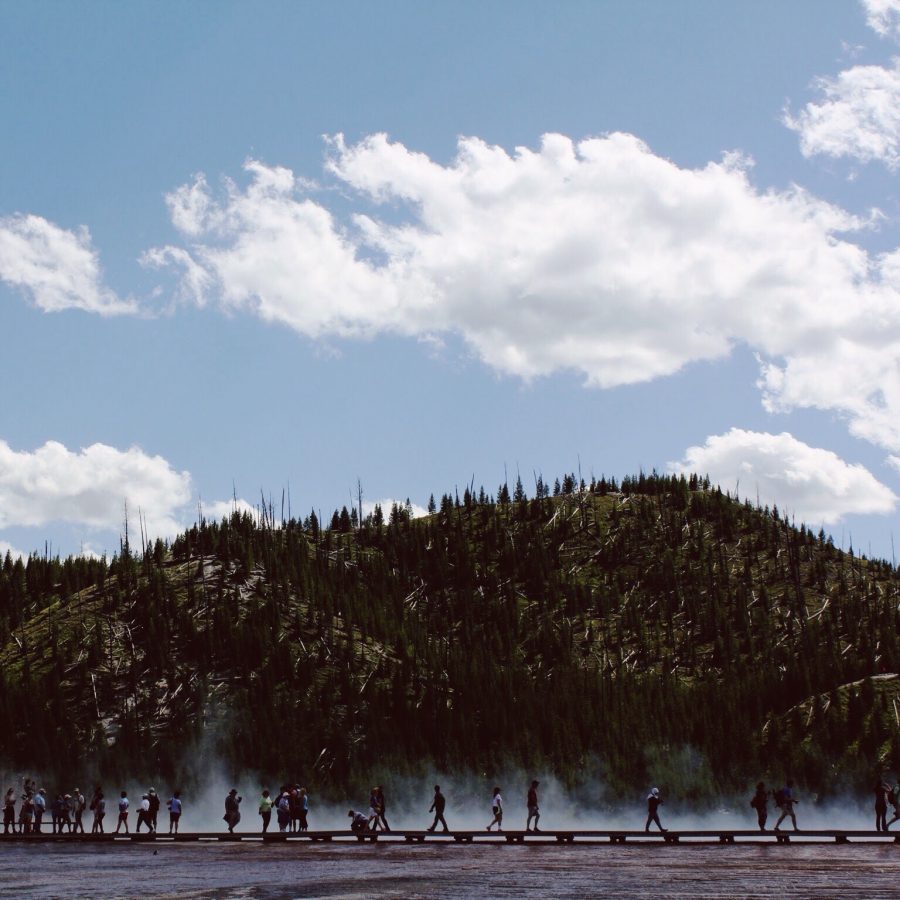 Visitors walk along the boardwalk next to the largest hot spring in North America, the Grand Prismatic Spring in Yellowstone National Park.

On Aug. 25, in honor of the 100th anniversary of the National Parks Service, President Obama signed a law that turned more than 87,000 acres of land located in central Maine into the newest addition to the NPS, Katahdin Woods and Waters National Monument. This monument was the 25th addition to the NPS to be approved by Obama during his presidency out of 413 total sites (parks, monuments and other units).

The oldest national parks such as Yellowstone, Sequoia and Yosemite have been open to the public for longer than the NPS has been in existence, and are showing the effects of over 100 years of visitors, which are increasing by the numbers every year. As good as crowds are for the national parks, they are not the best for former President Theodore Roosevelt’s idea of them being open forever, “There can be nothing in the world more beautiful than the Yosemite, the groves of the giant sequoias and redwoods, the Canyon of the Colorado, the Canyon of the Yellowstone, the Three Tetons; and our people should see to it that they are preserved for their children and their children’s children forever, with their majestic beauty all unmarred,” Roosevelt said.

In addition to the record number of 305 million visitors who brought revenue into the parks in 2015, new records are also being set in the amount of air pollution that is being released inside the parks from vehicles. The most obvious instance of air pollution is the smog that settles 6,500 feet up in the air in Sequoia National Park, located just an hour and a half outside of Fresno, California. Although the majority of the pollution can be accredited to the traffic nearby in some of the most polluted cities in the country, it’s not to say that there is nothing that the National Parks Service can do to help.

Starting in 2002, the Maine-based company L.L. Bean began donating what is now more than $3 million to Friends of Acadia to help preserve Acadia National Park located on the east coast of Maine as well as promote getting outside. The money has gone towards the transportation system on the island and has allowed people visiting the park to park their cars and ride around the island on any one of a few dozen propane powered buses, free of cost. When visitors choose to travel the park by bus rather than by car, less vehicles are polluting the air, which is better for the lifespan of animals and plants living in the park.

Climate change can also be caused by air pollution, where gases released into the atmosphere by cars causes more of the sun’s heat to be captured inside of the ozone layer. Change in climate negatively affects animals. It can affect hibernation patterns of mammals and migration of birds (which is even causing some birds are even permanently departing their homes because they’re no longer fit for them).

Acadia isn’t the only park that’s encouraged visitors to park their cars somewhere nearby or inside the park and get shuttled around on a bus to minimize pollution. Glacier, Grand Canyon, Yosemite and Zion are just some of the others. Persuading visitors to take buses rather than cars solves another problem, which is traffic in the national parks. Why should we have to drive for hours just to sit in our cars even longer, and by the way, end up polluting the air for an extended period of time, when there are ways around it that have already been established?

Marcy McCormick, Community teacher who aspires to visit all of the national parks shared her ideas on how traffic and pollution in the national parks can be decreased. “Crowds are good…it means that people are interested and they’re exploring their national parks,” McCormick said, “They’re paying entrance fees which help maintain them. There was a line to get into Zion when I was there. Maybe have limits of daily entrance…sign up for entrance to the parks that are more popular.”

Increased alternative forms of transportation, such as bussing systems being established in the parks and advertising to notify visitors is the most effective way to decrease air pollution in the parks. NPS only allowing a certain number of vehicles to enter each park per day will only help to solve the issue because it will reduce the amount of traffic in and around the parks, therefore reducing the length of time that visitors are sitting in their cars while they’re running and spreading exhaust fumes into the air.

By expanding the transportation services in parks as well as creating a system to reserve visits, we can ensure 100 more years of the National Parks Service. If we minimize the amount of gas that we release out of our cars and into the air by using buses, our children and our children’s children will too be able to experience the parks the same way that we’ve been able to, full of plants, wildlife and streams so clean that one can drink from. When asked about where she’d like to see the National Parks Service in 100 more years, McCormick said, “More. I think that we just need to maintain them, get more.” And of course, we there’s no better way to keep the National Parks Service alive than create more parks.