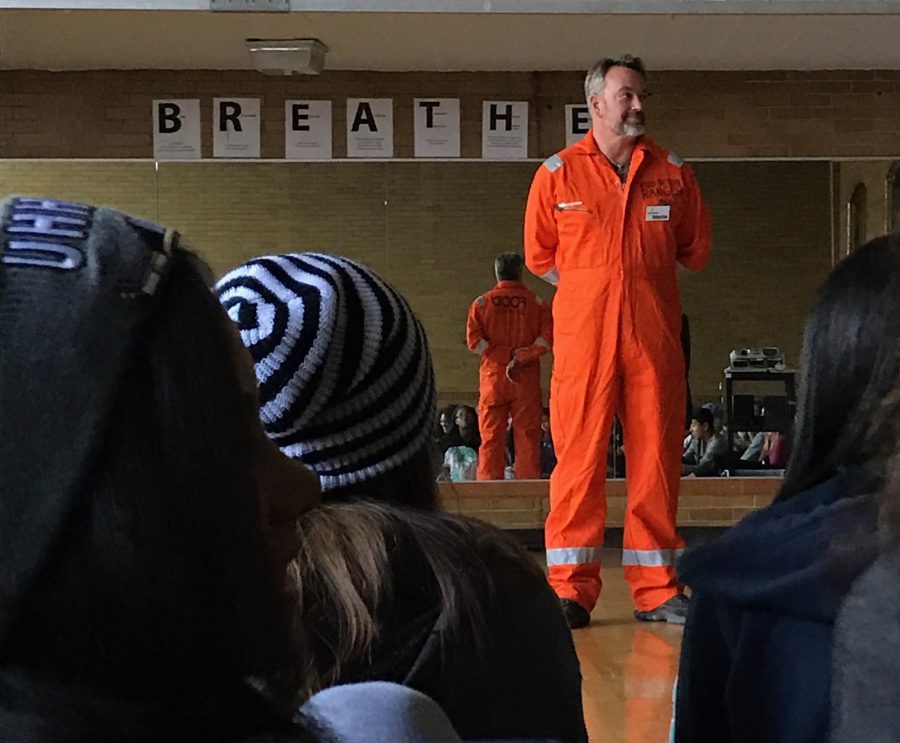 NOV. 1- CHS students and staff gathered in the Dance Body Room for the 2016 Food Gatherers Kickoff. Sebastian Wreford stands in front of the growing crowd in an orange jumpsuit with the words “Food Gathers” printed on the back and “Food Rescue Ranger” printed on the front.

Being a “Food Rescue Ranger” is just one of Wreford’s jobs at Food Gatherers. Wreford first got involved with Food Gatherers 15 years ago when he ran a delivery company and began doing deliveries and pickups for free whenever Food Gatherers was not able to complete it themselves. A job later opened up within the Food Gatherers team and Wreford said he was “all over that job like a jar full of grape jelly”.

Food Gatherers 501(c)(4) organization. It is the food bank that serves the Washtenaw County area. Food Gatherers distributes over 6.4 million pounds of food each year and 14,000 meals each day to food-insecure people. In Washtenaw County one in seven people are food-insecure, which means they do not know where or when they will get their next meal, and over 11,000 are children.

Fast forward to June of 2014 and Wreford was hired at Food Gatherers. Wreford now carries the title “Manager of Food Donor Relations” and works to improve connections with donors. Wreford works with grocery stores to set up an area and coordinate where food that they would not sell, but is still edible, can go and then be picked up by Food Gatherers.

Getting food from grocery stores is helpful, but they often lack fresh produce. “We get a lot of canned goods, we get a lot of boxed stuff, we get a lot of sheet cakes, and pop tarts, and hohos and ding dongs, that’s not so useful,” Wreford said. To help fill this void they have programs that involve churches and neighborhoods such as Faith in Food, which connects Food Gatherers with church gardens who raise produce to donate to Food Gatherers.

“We’re really connecting the dots between health and hunger. We know these people are hungry, the last thing we want is to make them sick and hungry. They need good food, they don’t just need food, you don’t just need to fill your belly,” Wreford said of the agricultural initiative.

With the help of the Ann Arbor community, including Community High School, Food Gatherers is able to supply agencies that give out free meals, such as the Community Kitchen at the Delonis Center, for essentially no cost. On occasion Food Gatherers has to charge for a food delivery to an agency, but of the ten million dollars worth of food that was distributed by Food Gatherers last year only two percent was paid for by agencies. With the money that the agencies save, they are able to focus on other current problems like homelessness and medical care.

Community High School has been supporting Food Gatherers since 2009 when two teachers, Tracy Anderson and Anne Thomas, came up with the idea of having a school-wide fundraiser each year for Food Gatherers. That first year the students and staff were able to raise $4,000 but just last year in 2016 they were able to present almost $60,000 to Food Gatherers with the help of generous donors, Harold and Kay Peplau, who agreed to match funds the school raised dollar-for-dollar up to $50,000. This year CHS has received the same offer from the Peplau’s and the students and staff have set a high goal to be able to present Food Gatherers with  $50,000, which would be matched for a grand total of $100,000, on Nov. 22, when Wreford will go back to CHS to see the final result of the three week fundraiser. “Whatever you guys get is great, but wouldn’t it be amazing to be able to say we raise 100,000 dollars,” Wreford said.