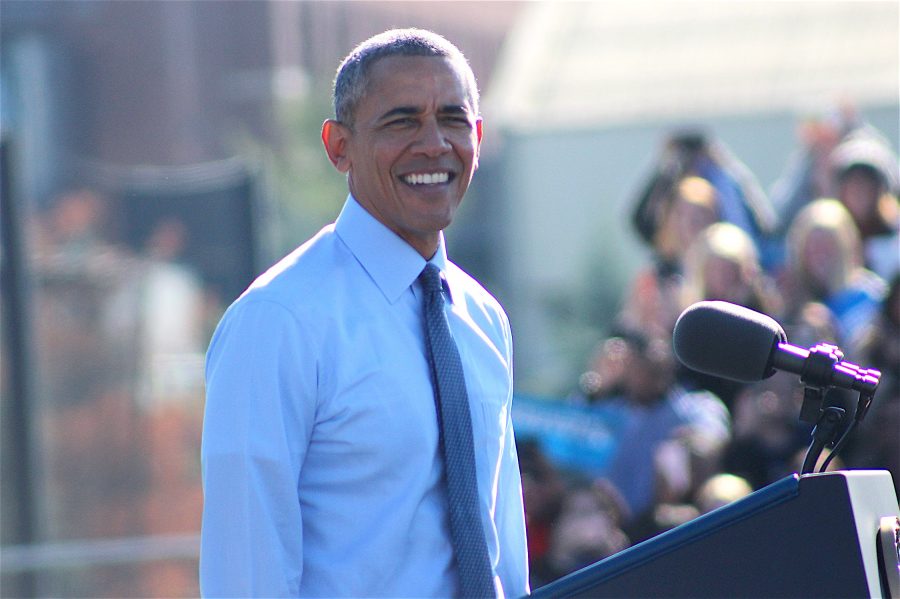 President Barack Obama stands before starting his speech as the crowd cheers.

The mass of people filing into Ray Fisher Stadium snaked in circles around the parking lot and spilled, uncontrollably, onto Hoover St. in downtown Ann Arbor, MI, by 8:30 a.m. on Mon., Nov. 7. President Barack Obama’s “Get Out the Vote Rally” for Hillary Clinton was not scheduled to begin until 11 a.m., but the liberal stronghold in the town gave the Commander-in-Chief an early and enthusiastic welcome.

Throughout all of the speakers, the importance of voting was a recurring theme. While most of them simply used their time to point out Donald Trump’s flaws and bring to light Hillary Clinton’s achievements, Deitch and Ilitch also advocated for their own reelection, particularly emphasizing the importance of lowering college tuition.

“Education is the single most important stepping stone to power, to freedom, and to equality,” Ilitch said, quoting Michelle Obama. Ilitch herself was the first of her family to go to college.

After Senator Peters’ speech, nothing seemed to happen. Ten minutes passed, then 15, then 20. It wasn’t until nearly 12:30, the scheduled ending time for the event, that Hillary Clinton’s daughter, Chelsea Clinton, took the stage, wearing a shirt that read ‘Make Herstory.’

“This is the most consequential election of our lifetimes,” Clinton stated to begin her speech. “Everything we care most about, including our values, are on the ballot this year.” She continued to speak on why this election was important for parents such as herself, as well as why she is so proud to be campaigning with her mother.

“She never gives up because she never forgets who she’s fighting for,” Clinton said.

Much like those who spoke before her, as Clinton neared the end of her remarks and approached her introduction of the President, she emphatically called upon the crowd to vote the following day. She listed off health care, women’s rights, climate change and LGBT marriage equality as just a few of the reasons the students in the crowd may have been present at the rally, and urged them to vote based on the issues they cared about most.

“Whatever it is that has brought you here today, please make sure it takes you to the polls tomorrow,” Clinton said. She then highlighted the importance of continuing the progress President Barack Obama has made and finally welcoming him to the stage.

“It is good to be back in Ann Arbor, and I know you guys are feeling pretty good right now, 9-0,” President Obama said, referring to the university’s streak of football wins this fall, causing an immediate uproar from the crowd. “It’s impressive, although I talk to Coach Harbaugh, he’s all like, ‘No no, next game. We got a long way to go.’ So he’s focused, and I need you to stay focused, because I’m asking you to pull off another victory this week. We’ve got one more day, Michigan.”

President Obama went on to call on the people of Ann Arbor and students of the University of Michigan to help make Michigan “go blue” for the democratic party on election day. He spoke to the accomplishments of his past eight years in office, including bringing the country out of the Great Recession, helping restore the auto industry, lowering the unemployment rate, providing health insurance to 20 million Americans, taking on a role of leadership against climate change, assassinating Osama bin Laden, increasing high school and college graduation rates and making marriage equality a reality in the United States. He promised the crowd that under a Hillary Clinton presidency, these accomplishments would continue to grow, but that voting was the key to making such growth a reality.

“Tomorrow, you will choose whether we continue this journey of progress, or whether it all goes out the window,” President Obama said.

The President did pause during his speech supporting Clinton to thank the many speakers who had preceded him and organizers of the numerous grassroots efforts across America that helped to elected him and are now working on Clinton’s campaign. When thanking these organizers, he added, “I’m feeling a little sentimental. This is going to be my last, probably my last day of campaigning for a while.”

President Obama moved on to cover Clinton’s Republican opponent, Donald Trump. He said that Trump was “temperamentally unfit” to be Commander-in-Chief. As Trump’s Twitter account was taken away this weekend by his campaign, President Obama commented, “Now if your closest advisors don’t trust you to tweet, how can we trust him with the nuclear codes?”

In addition, he stressed that Trump is not qualified to be Chief Executive for America due to his treatment of American workers, particularly in Michigan. He pointed out that Trump had suggested bringing the auto industry out of the state because of the wages their unionized workers required so as to “squeeze Michigan” and give autoworkers “no choice but to accept less pay.”

The audience reacted negatively to this, boos and hisses echoing around the university’s baseball stadium. The President responded, “Don’t boo-”

The audience cheered back to him, “Vote!”

“He can’t hear your boos, but he’ll hear your votes tomorrow,” he said.

President Obama pointed out that all of his accomplishments over the course of his presidency were because of the choice that voters made. He told the crowd how important their vote was eight years ago and how important it would be on election day, not missing the opportunity to throw in a jab at Trump’s infamous campaign slogan, “Make America Great Again,” along the way.

“In ‘08, people decided to choose hope over fear,” President Obama said. “Over the course of these eight years, all across 50 states, I’ve always seen what made America great. I’ve seen you—Americans of every faith, every background, Republicans and Democrats—who understand that we’re stronger together. Young, old; men, women; black, white, Latino, Asian, Native American; people with disabilities; gay, straight—all of us pledging allegiance to the red, white and blue. That’s the America I know, and there’s only one candidate in this race who has devoted her life to better America.” He also admitted that even though it has been an extensive campaign, the advances made will not matter if Hillary Clinton does not win the election tomorrow.

That win, he emphasized once again, would come from everybody showing up to the polls. President Obama declared that, both in 2008 and in the election the following day, the American people as a whole were in control of how this country would be shaped.

“The most powerful word in our democracy is the word ‘we,’” President Obama said. “‘We the people,’ ‘We shall overcome,’ ‘Yes, we can.’ America is not about what one person can do for you. I didn’t say ‘Yes, I can.’ I said, ‘Yes, we can.’ I told you I wasn’t a perfect man, wouldn’t be a perfect President, but I said, I will work alongside you. I will work as hard as I can to make sure that all of us together can advance the causes we believe in.”

The 2008 election brought voter turnout in Michigan up to about 66 percent, the highest for the state since 1968. As President Obama concluded his remarks, he once again called upon voters to show up for Hillary Clinton in the same way they did for him eight years previously.