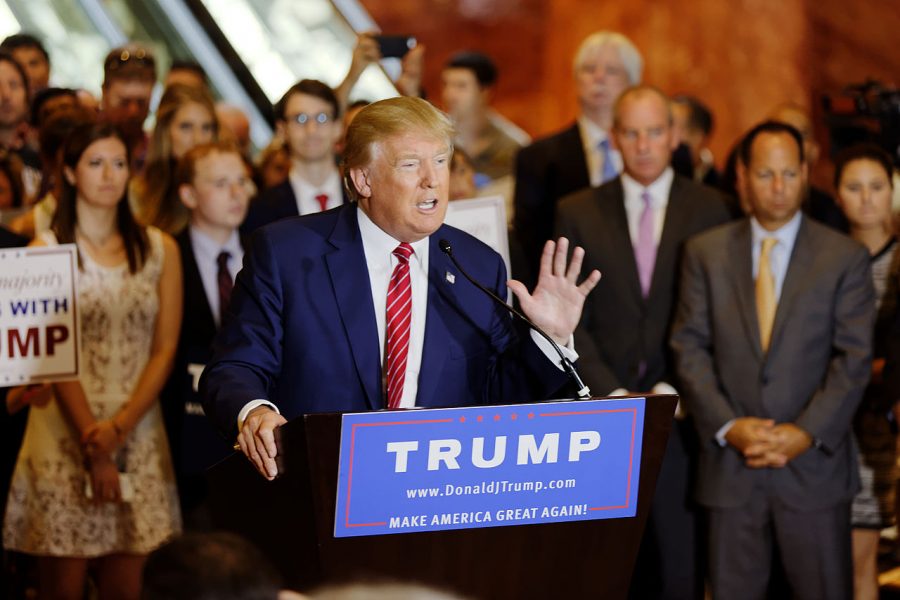 Chants shouting “USA!” came from the teary crowd at Trump HQ in New York at 2:45 A.M, on the morning of Nov. 9, 2016, as Mike Pence introduced The United States of America’s 45th president, Donald J. Trump. At 2:30 A.M., The Association Press officially called the 2016 U.S. Presidential election.

Briefly after that revelation, Hillary Clinton called Donald Trump to concede from the race.

Trump took the early lead in the polls, taking Kentucky, Indiana, and West Virginia by large margins, winning 24 electoral college votes, 21 more than his opponent former Secretary of State Hillary Clinton who took Vermont in the first polls. Trump performed better than expected in all of the states he needed to win, including key states Florida, Michigan, Wisconsin, and Pennsylvania. Once the candidates reached 200 Electoral College votes, Trump pulled away, eventually taking beyond the 270 votes needed to win.

One of the most important states that presented itself in the beginning of the night was Florida. Clinton’s campaign had reasonable confidence in Florida before the night began, but that faded away as soon as votes began coming in and Donald Trump took a sizable lead. Following that big jump, the race for the ‘sunshine state’ tightened. It stayed neck and neck until the very end, when Trump raised enough votes to claim the state by a very thin margin.

Turnout in Wisconsin and Pennsylvania were vital for Trump’s success. Wisconsin is a historically Democratic state that hasn’t went right in years, but it did for Trump.

One surprising factor of this win was that most polls showed Hillary Clinton winning. This called into question the entire poll market, and questioned the demographics of people these polls reach.

Trump formally announced his running for the presidency on June 16, 2015. At that time there was a whopping 17 GOP candidates. The most notable Republican candidates aside trump include Ted Cruz and Marco Rubio, who were the last two candidates to drop out.

Donald Trump will be the single oldest president ever elected, topping the former oldest Ronald Reagan. Since the start of his campaign, he had drawn lots of public attention to the election and has received mass amounts of public criticism for his unorthodox policy proposals. These included implementing a total ban on muslim immigrants seeking safety, and building a wall along the US-Mexican border to keep Mexican immigrants out of the US. His unreserved comments on minorities also received a lot of criticism. In his opening campaign speech, Trump said the infamous line about Mexican immigrants: “They’re bringing drugs, they’re bringing crime, they’re rapists.”

Both candidates have had their fair share of scandals and Saturday Night Live spoofs throughout their campaign. Even up until the last week of the campaign season, Clinton had more emails leaked from her and other staff workers’ personal emails that have been under trial and scrutiny for the last two years. Trump has also been under fire after multiple women have come out and accused the candidate of sexual assault, along with a tape leaked from his reality TV show “The Celebrity Apprentice”. This tape displayed Trump saying explicit comments about women, now categorized as ‘locker-room talk’ by Trump.

In the last stretch of the campaign trail, both Trump and Clinton have been very hostile rivals, Trump calling Clinton a ‘nasty woman’ at the 3rd Presidential Debate, as well as Clinton calling Trump supporters ‘a basket of deplorables’.

Not only was the Republican president elected, but the GOP also claimed majority on the Senate and House floors. This created an all-republican Washington because Trump and Congress can appoint Republican cabinet members and a Republican Supreme Court justice.

Backlash of the Trump being elected included the hashtag #HeIsNotMyPresident, which expressed views as to how Trump will set back the country 30 years, or even more.

President Obama is expected to meet for lunch with Trump sometime within the next week, and Trump will be inaugurated on January 20th, 2017.