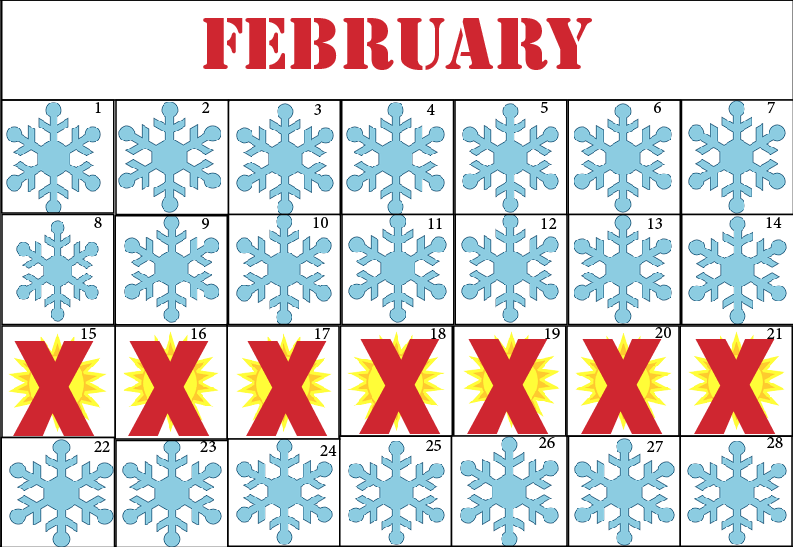 Anja (AJ) Jacobson visits her grandparents in Venice Beach, Fla. every February. For years and years, she has swam in the pool that overlooked the Gulf of Mexico. The many, many times on the elevator heading up to the sixth or eighth floor. Jacobson recalls the countless nights spent sleeping on the bed her and her brother jumped on hours prior. However this year, she is not going to make the 1,236 mile trip to the beach. Not because the beach, not because the pool, not because her grandparents or the bouncy bed will not be there, but because Ann Arbor Public Schools took away mid-winter break.

When reaching out to Ann Arbor Public Schools Superintendent, Dr. Swift, about why the break was taken away, she responded with the following statement:

The Ann Arbor Public Schools (AAPS) District calendar is determined in negotiations between the Ann Arbor Education Association (AAEA), the teacher’s Collective Bargaining Group, and the AAPS Administration which represents the Board of Education.

“AAPS has had a mid-winter break, beginning with the 1999/2000 school year, and efforts were made to align it with the University of Michigan’s spring break whenever possible.  In years past, the AAPS spring break was determined by the Easter holiday, but that is no longer the case.

For the current 2016/2017 school year, the State of Michigan increased the number of instructional days by five (5) for public school districts and that is what prompted the loss of the mid-winter break.

In short, mid-winter break was taken away because the State of Michigan increased the number of school days required in a school year. AAPS also lost some of those days when they aligned their spring break with the University of Michigan’s break in 2000 by moving it away from Easter week.”

As a result of the State of Michigan increasing the number of instructional days, families like the Jacobsons will not be able to continue with their mid-winter break traditions.

The Kiley family is in the same situation. “We’re going to go [to Florida] in April, but… we won’t get to go at the same time as the rest of my family, so we’re not going to all be together which is a total bummer,” said Courtney Kiley, Community High School (CHS) science teacher.

Kiley continued by saying that this break will affect her classes; she said that families have already reached out to her and told her that they have a timeshare and are going on their vacation anyway, despite the schooldays existing.

With teachers making between $60,000 to $80,000 per year, with an average of $388 per school day, this amount will decrease due to these days being taken away, the teachers are not being paid to work these extra days. The annual salary will stay the same for teachers, while the number of work hours will go up. “I’m still going to teach, and I’m still going to come in and do what I do and be enthusiastic, but it just kind of sucks,” Kiley said.

In addition the teachers having to do more work, so do the kids.

“I think that students deserve more breaks [rather] than less breaks,” said Gabby Hornak, CHS junior. “It’s a long chunk of school where we don’t have any breaks, and so I feel like we should have it.”

With over a month of school between federal holidays – which creates three day weekends for students and almost four months of school between significant breaks – Hornak has grounds to believe that it is too long of a stretch.

There are several studies that provide evidence that supports for more breaks and vacations.

Office workers and students who take short, frequent breaks during the workday have more stamina and fewer aches and pains when they return to work, a new study by health.com suggests.

Just as short breaks improve concentration and productivity, long breaks help performance as well. Lack of vacation increase mistakes and resentment of peers according to the same health.com study.

“The impact that taking a vacation has on one’s mental health is profound,” Francine Lederer, a clinical psychologist, told ABC News. “Most people have better life perspective and are more motivated to achieve their goals after a vacation.”

“I can see why they would get rid of the break,” said Andrea Schnell, CHS sophomore. “But sometimes staying in school for such a long period of time fries our brains.”

In winter, the amount of sunlight can dwindle down to only nine hours per day. Due to such little sunlight, days become grey and dull.

“February is the worst month in Michigan, it’s the doldrums of winter, and it’s nice to have a break.” Kiley said. When the weather turns cold, students with seasonal affective disorder (SAD) show their symptoms. Cold temperatures make it easy for everyone to curl up, relax, avoid exercising and forget about work, according to a health.com study.

When students found out that their beloved mid-winter break was shortened to only a long weekend, students and teachers alike felt frustrated. Most people won’t be able to do the things they usually do during this break.

“It’s just going to be a long weekend,” Kiley said. “We don’t celebrate President’s Day in my family or anything, so it’s not going to be super special.”

“I think there were other options if we needed to add more days,” Kiley continued saying. “There are other options than just taking this huge chunk of time. I would be more than willing to teach on the Wednesday before Thanksgiving, and Martin Luther King day and all these other days instead of taking that break away.”

When teachers and students were asked one word to describe how they felt about mid-winter break being taken away, the responses were as followed: Disappointed. Sad. Strategic.