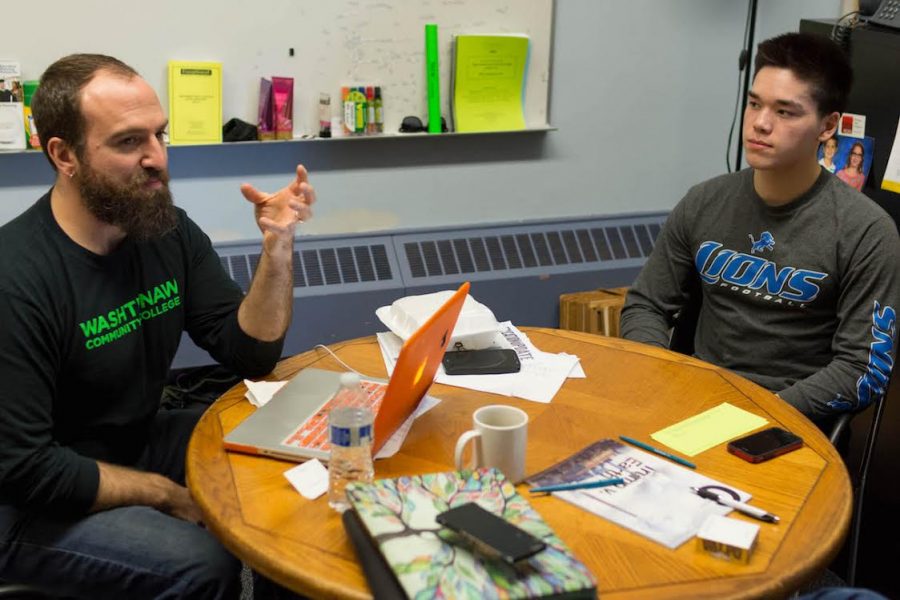 Counselor Brian Williams discusses the advantages of going to Washtenaw Community College with Suibhne O’Foighil. Confused at the lack of students currently applied for the scholarship Williams tried to grasp the concept. Photo Credits: Alec Redding

What would you do if a college approached you and said that you could go to that college for free and all you had to do was fill out a form? You would probably fill out that form right? Washtenaw Community College (WCC) has those scholarships specifically for Community High School students, that pay for students entire college tuition. However, only three Community students have applied for these scholarships.

“Washtenaw has up to six of these incredible scholarships,” said Brian Williams, Community High School counselor. “If they don’t cover everything, they cover full tuition and if they maintain a certain GPA for the year, it’s renewable at the end of it. So basically its two years of free college.”

The requirements of these scholarships are to have a GPA of at least of 3.2, to be enrolled for at least nine credit hours, and to declare a major field. Having only three applicants for these scholarships means the odds of acceptance are higher than your odds of getting into Community High School itself.

High school students that don’t have a GPA of 3.2 or higher also have a chance of securing a scholarship. Well in April of this year Washtenaw will be releasing more scholarships for Community students for students with lower GPAs. These scholarships are called Procaccini Scholarships and the President Honors Scholarship.

“One scholarship called the Excellence Scholarship is for students who are really strong at something,” Williams said. “It doesn’t even have to be school, but if they’re an exceptional athlete, or a musician, or an artist, they could still apply and still get a significant amount of money just for being good at something.”

The hard work has already been completed, the GPA has been achieved. The counselors at Community are willing to help students create the application for these scholarships. All you need to do is apply for WCC, which you will automatically be accepted into, and fill out the application. The application deadline is Wed., March 15. So go out and fill your scholarships.