A Tale as Old as Time: Bill Condon’s “Beauty and the Beast” 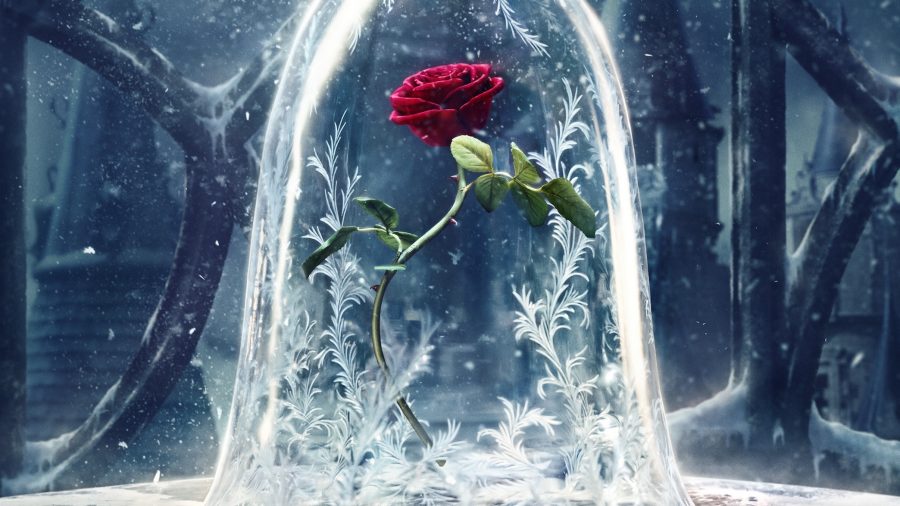 Although beautiful, this isn't your ordinary garden flower: this cursed rose is incredibly important in the film.

As the emotional number came to a close, I felt tears stream down my face. I was mesmerized. Then, the sounds of someone chewing popcorn brought me back to Earth. From beside me, there was snickering. “Are you crying?” one of my friends mouthed to me, laughing. The film that moved me to tears? None other than the 2017 live-action remake of the Disney classic, Beauty and the Beast.

Directed by Bill Condon, written by Stephen Chbosky and Evan Spiliotopolous and starring Emma Watson, this updated version had some large shoes to fill as they attempted to update the self-proclaiming “tale as old as time.”

Beauty and the Beast is a tricky story. Not only was the film banned in certain theaters for its inclusion of the first ever gay Disney character, but there were claims that the love story is nothing more than bestiality, or that Belle simply suffers from Stockholm Syndrome as she falls for the Beast. This version properly and elegantly dispels these ideas. Belle learns of the curse and the Beast’s true identity before she starts to develop feelings for him. Condon does this to show us that she’s not falling for an animal, but the man inside. Belle also maintains her fierce desire for freedom throughout her stay in the castle, bickers with the Beast constantly, and—even as she falls for him— tells the Beast that she can never be truly happy without her freedom, keeping us from believing the Stockholm theory. To me, it is a relief that these issues were addressed, keeping the film romantic instead of creepy.

“This castle is alive,” Maurice says to his daughter Belle from behind his prison walls in the beginning of the film. Turns out, Maurice was spot on, and in more ways than one. The dazzling special effects that the film employed to create the castle and the talking objects inside it paid off, creating the illusion that the talking teacups, chattering candelabra and flirty feather dusters were all quite real. From the spectacle that was “Be Our Guest” to the scene where the townspeople fought the servants-turned-houseware, the animations emphasized the feeling of fantasy while still keeping the audience guessing about what was computer-generated and what wasn’t. To be plain, they swept me off my feet. The soundtrack helped similarly, adding emotion into every song and scene, note by note (you won’t make it through ‘Evermore’ without shedding a tear.) These two combined really brought in that “Disney Magic” that I was looking for in the remake, and kept the film true to it’s roots.

A great movie needs great characters, and this cast only added depth to them. Of course, our headlining star Emma Watson delivered, portraying Belle as a compassionate, intelligent young woman full of strength, courage and a desire to find out more about herself, her past and the world. But there were other performances that stood out as well. Dan Stevens carefully walked the line between cold-hearted monster and a man just looking to be seen as human as the Beast. Kevin Kline was wonderful as Maurice, capturing the inventor’s essence and giving us those touching father-daughter moments. All the enchanted objects were brilliantly played/voiced, with each having a distinct personality to them. And of course, the devilish duo that was LeFou and Gaston (Josh Gad and Luke Evans, respectively), who had us in stitches when they didn’t have us enraged. These characters brought the story to life, and without them, the film just wouldn’t be the same.

Going into this, I personally had high expectations. Belle is a princess for bookworms, dreamers, boys and girls who snuck their flashlights under the covers to finish one more chapter. She’s always been my favorite, and I wanted to see her story realized to its full potential. I am happy to report that my expectations were not only met, but exceeded. Of course, the film wasn’t flawless. I would have loved to see more on LeFou’s sexuality, a few more songs and some more on Belle’s life after breaking the curse (you can’t tell me she stopped inventing.) But these minor details do nothing to distract from the story or film itself. Overall, this movie took the classic and amped it up ten-fold. This fantastic story of true love, bravery and inner beauty was a joy to watch unfold on the big screen. Go out and buy your tickets, folks. This truly is a “tale as old as time.”