Paleoclimatology: What History Tells Us 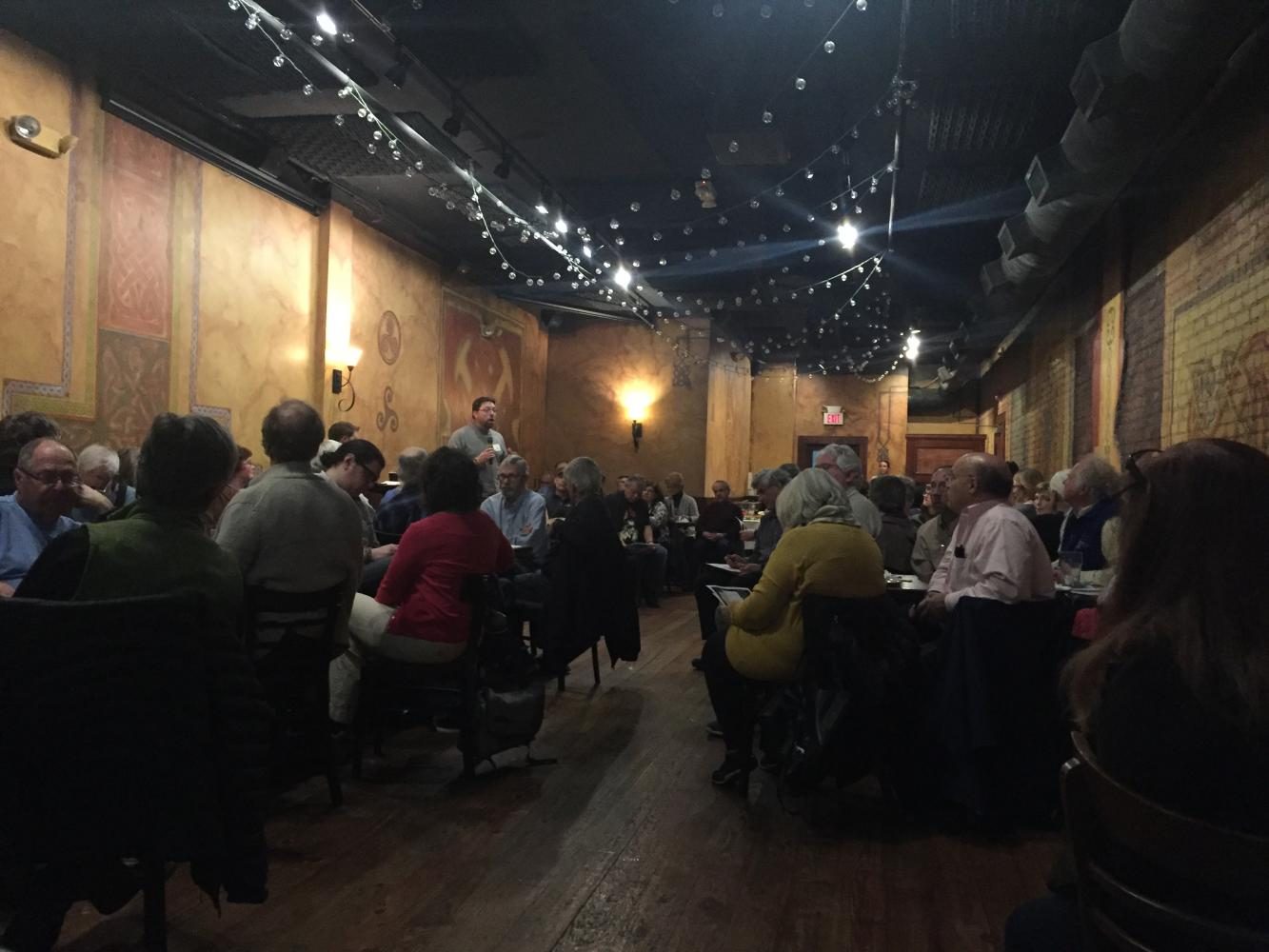 Paleoclimatology is the study of the evolution and history of the Earth’s climate. How has the Earth’s climate changed over the past 100 million years and beyond? What are the causes of major climate trends throughout the Earth’s history? What implications do these findings have for the future? These are all questions that University of Michigan professors Chris Poulsen and Nathan Sheldon explore in their research.

On Feb. 22, The University of Michigan Museum of Natural History hosted their monthly science cafe at Conor O’Neill’s Pub in downtown Ann Arbor. A science cafe is an interactive lecture open to the public on contemporary issues in the STEM fields. February’s subject, “Ancient Climates, Future Climates–What Can the Deep Past Tell Us?,”  was led by Sheldon and Poulsen.

“[To predict temperatures] we use geochemical signals called [stable oxygen-18 isotopes] in little shells called Benthic Foraminifera,” Poulson said. “These are little organisms that flow or move along the ocean floor.” Geologists have recovered tens of thousands of these shells and measured the amount of stable oxygen-18 isotopes preserved in each one. By doing that, they have developed a timeline of the temperature of the Earth over the past 110 million years. The kicker: average surface temperature has declined by 12 degrees Celsius in the past 100 million years. “This is not the same as a ten-degree temperature change that happens in Ann Arbor; we do that daily,” Poulsen continued. “This is the long term average temperature of the ocean over tens of millions of years.”

But the climate sink is no reason to think lightly of modern climate change. Over the past 500 thousand years the carbon dioxide parts per million (ppm) has bounced around between 180 and 280 ppm. This variation is typical short term climate change. However, that number has risen sharply in the past 150 years and has reached a historic high of 406 ppm.

“The interest of the paleoclimatologists and my interest is in what drove that long term change,” Poulsen said. “How did we go from a world that was completely different to the one that we know today?” To figure that out, paleoclimatologists use climate models. Climate models are simulations that mimic the conditions of the surface, oceans, and atmosphere of the Earth. These models are often used by climatologists to predict what the future climate of the Earth will look like.

The conclusion that can be drawn by using the proxy method (using more than one variable to measure a single variable that cannot be measured directly) is that CO2 and climate have a direct relationship. If carbon dioxide levels drop, temperature drops. If carbon dioxide levels rise, temperature rises. Over the past 100 million years, both variables have dropped at similar rates.

Professor Sheldon spoke primarily about the implications that the historical changes in climate have for the future.

“We don’t refer to climate change anymore as global warming,” Sheldon said. “The reason for this change is not because the planet as a whole isn’t warming up. It’s because it’s not warming up at the same rate at every place.” Sheldon discussed the two main effects that our current carbon dioxide emission rates may have. The first, the average temperature of the Earth will become warmer. Consequently, winters will be shorter, summers will be longer and both will be warmer. The second possible outcome is that the average temperature of the Earth stays the same, but the variance of climate changes. In other words, we will have sporadic temperature changes year round. “If you’re a farmer, it’d make it a lot harder to predict when to plant your product,” Sheldon said. “Do you try to get an extra harvest in when the snow’s gone? What happens if it snows in two weeks and it wiped out that first bit of crop? This has an impact on stuff like that.”

When Sheldon was studying at the University of London, the British government was encouraging the climatologists to spread the idea that the effects of climate change are not unilateral; the effect of climate change will not simply be a warmer atmosphere. They wanted people to understand the consequences of increased climate variation. “The end result of all this was an observation that the best place to grow wine in Europe is not going to be France anymore. It’s going to shift across the English Channel to England.”

The lesson to be learned, according to  Professor Sheldon, id that the effects of climate change are not unilateral; the average temperature of the Earth is not simply rising as we build our carbon footprint. The more devastating effect will be the combination of the rising average temperature and the unpredictability of climate phenomenons.