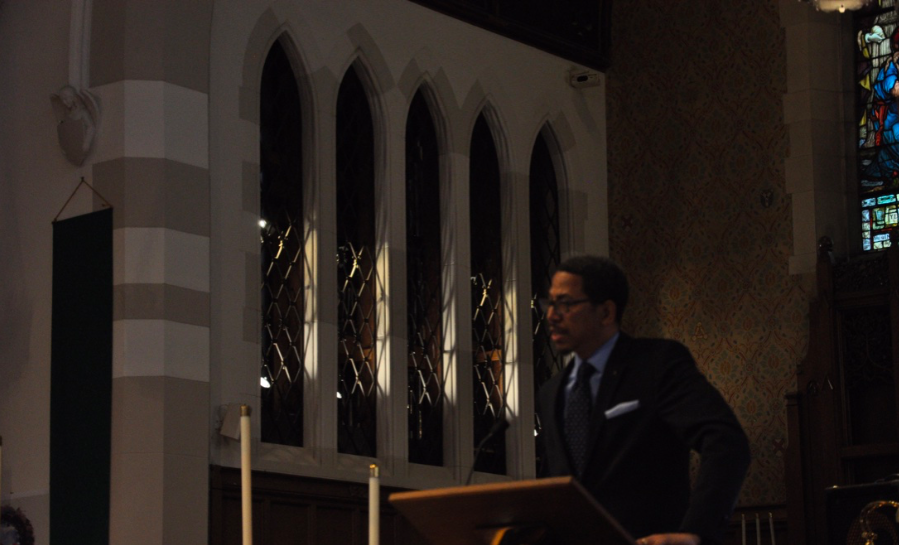 The event kicked off with a serenade of ‘Lift Every Voice and Sing’ played by the CHJB, sung by the Michigan Gospel Chorale, and ASL signed along to the lyrics. After the song finished, another was performed. The Gospel Chorale sang ‘Ride On King Jesus’ and ended their performance with a standing ovation from CHS students and staff. It was followed up by a speech from guest speaker, Dr. Larry Rowley.

Dr. Rowley works as a senior lecturer at Irvin D. Reid Honors College at Wayne State University. He is also a former faculty member for African-American studies. Dr. Rowley’s speech mainly focused on how Martin Luther’s dreams can correspond with our society today. His words also focused on how we in the present can use social media platforms for  justice, instead of bad energy.

“In order to be nonviolent, you must be able to see all  as your equal,” Rowley said. “We are all citizens of the same world, and all are equal.”

When Rowley finished saying his words, it was followed by an enormous round of  applause.

Later in the event, BSU said a rendition of MLK’s ‘I Have A Dream’ speech, by saying what their dreams would be for the society’s future.

“I have a dream black men in this country, will not be killed at an alarming rate,” Janelle Johnson, a teacher at CHS and BSU leader said.

“We have a dream that our dreams will prevail,” a BSU member would say  after every two dreams were stated.

There was overall 16 dreams said in total.

“I have a dream that we will love black people as much as black culture.”

“I have a dream that people will not pretend to be colorblind, and realize that our differences make us stronger.”

“I have a dream that one day people will be able to live their lives to the fullest, and not be oppressed by gender norms.”

Once the assembly had finished, it ended with the CHJB leading students and staff out of the church, while they played music.