Why Men Shouldn’t Be Afraid of Feminism 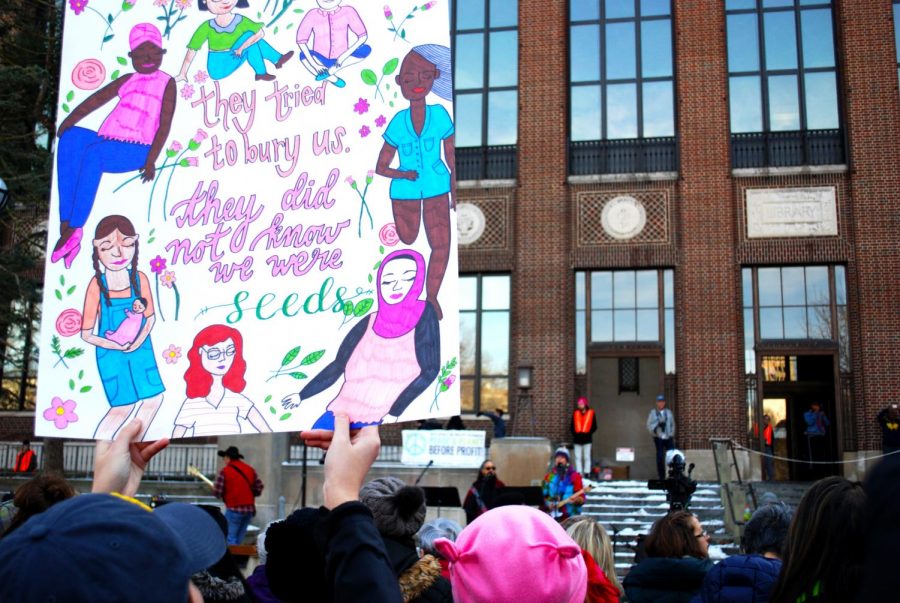 A poster from this year's Women's March in Ann Arbor.

I will always consider myself a feminist. Not the kind who believes women are superior, or the kind who thinks that all men are dirty and sexist. After all, I was born as and identify as male. I have the perspective of privilege; my fair skin, blue eyes, and male sex have all benefited me. They will help me to earn more than my female peers in the future, and they will likely allow me to dominate meetings and conversations if I so wish. Even if I don’t consciously take advantage of my privilege, I would gain from it in those situations if I were to remain uneducated and inactive.

The reasons I consider myself a feminist run deeper than the surface desires of wealth, power, and stereotypical male strength. They lie in the women around me. I see the kindness, strength, intelligence, and beauty of my female friends and family, and struggle to understand the reasoning of those who argue against feminism. Feminism, in its most basic form, stands for equality. The wage gap, prevalence of sexual harassment and assault against women, and daily injustices all disprove the claim that things are already equal. The basic humanity of women proves that equality is something to work for. However, feminism also stands for action.

Action as a feminist male takes many forms. Men do not and should not have a leading role in a female movement. However, we have been given power, and with power comes a choice: to recognize discrimination and act thoughtfully, or to close our eyes and work selfishly.

When men act thoughtfully, we play an important role in the feminist movement. The power in our world has been given to men, and the men who hold it are most often not sensitive to the needs of women. But they are nearly always sensitive to the requests of men. In that way, feminist men can persuade power to shift its views. We must not lose sight of the women in leadership, however. We can only work as an extension of their wishes, and only work to a point of equality.

The other argument that comes up in conversations I have had with male friends is that they will be put into a second-rate class if feminism prevails. This is a gross misunderstanding. Equality would benefit us greatly. Traditional masculine values pressure men to be unfeeling and strong in such a way that they push emotions away. However, men who deal with their feelings and come out stronger because of it are accepted and promoted by feminists. We would have more understanding conversations with our female peers, and based on my own experiences, would view the world with a deeper and kinder mind.

Equality has, throughout history, prevailed, and with the rise of #MeToo and the strength of the Women’s Marches, feminism is already on its way to becoming mainstream. An important question remains for men: will we be on the right side of history by supporting our friends, family, co-workers, and leaders, and eliminating toxic masculinity, or will we choose to grasp at the last strings of unfair power that we have been allowed to take?