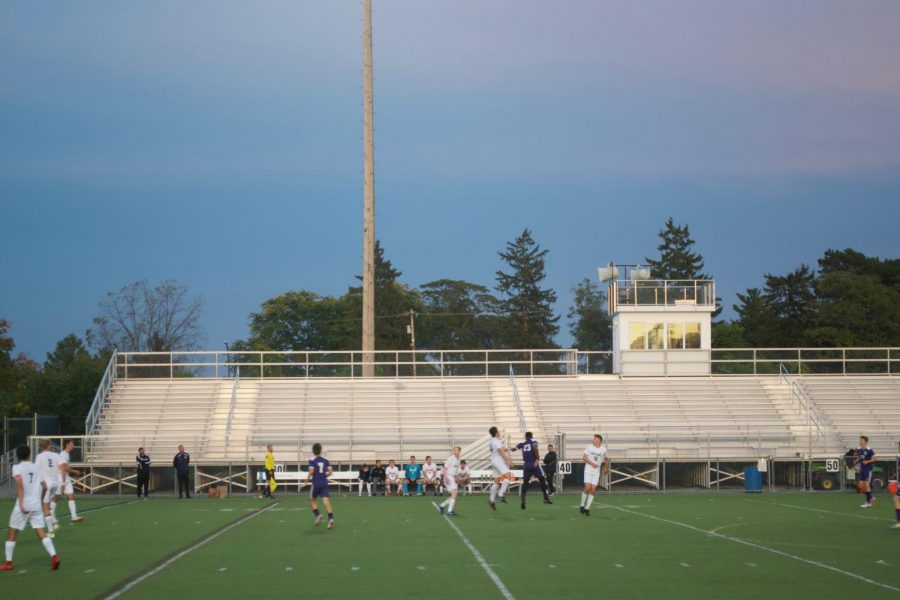 Skyline High School men’s varsity soccer team took on cross-town rival, Pioneer High School, on Sept. 27, 2018. It was a cold Thursday night, and fans gathered in the stands of Pioneer’s Hollway field to watch the two teams compete on the pitch.

This was the second time the two teams played each other this season. Their first game, in late August, resulted in a 0-0 tie, and both teams played with heart and intensity.

As the starting whistle blew, the players began to play with urgency. Three minutes into the game, Skyline had already released multiple shots on goal, all saved by CHS student and Pioneer goalkeeper, Ojanis Frometas. Both teams matched the other’s intensity for the first 20 minutes, but as Pioneer started to slack, Skyline was able to use it to their advantage.

Skyline has many strong players on their bench, and speed is a strength both the men’s and women’s team use to defeat their opponents. With about 10 minutes left in the first half, Skyline sophomore Tyler Warren, advanced down the field in a breakaway, beating multiple defenders. He dribbled to the left side of the goalkeeper’s box, and as he wound up to release the shot, Frometas slid in for a tackle. The play was smart, and Frometas went in for all ball, instead of Warren’s feet, making the play legal. There was a ruckus in the stands  as Warren flipped over Frometas’ back, and landed on the ground. Skyline fans and players were hoping to gain a penalty kick from the play, but were disappointed with no penalty being awarded.

With seven minutes left in the half, Skyline sophomore Gabe Kellman scored the first goal of the game. A ball was played over the top, and junior Chris Emerson was pressuring the Pioneer defender. The ball popped out to Kellman’s feet, and he released the ball into the upper left corner.

“We’ve had a lot more time since last game to get prepared for [the game],” Kellman said. “We just learned a lot in practice, and we’ve gone hard.”

Skyline sophomore, Zack Kubisiak, scored the second goal of the game. The ball was bobbled around the box, creating numerous opportunities, and Kubisiak was able to finish his chance, which ramped up Skyline’s intensity for the rest of the game.

Although Pioneer’s morale stooped low in the second half, they still had very strong plays. Pioneer junior, James Simon, released powerful balls over Skyline’s defensive line, as well as flighted free kicks into the box. With 13 minutes left of the game, a penalty kick was awarded to Skyline. Although a powerful shot was ripped from Skyline player, Siggi Tu, Frometas was able to block it.

Emotions ran high in the second half, and players became more physical. A yellow card was handed to one of Skyline’s players for grabbing at jerseys, and the clock stopped for a few minutes due to injury.

Within the last 10 minutes of the game, the last two goals were scored by Skyline Junior, Oskar Shiomi-Jenson. After a beautiful header off of a corner kick, the score increased in Skylines favor 3-0. The ball served in had perfect curvature, and Shiomi-Jenson was able to whip the ball into the back of the net. The last goal was scored with thirty seconds left of the game. Chris Emerson, had a breakaway, and dribbled up the sideline. His pass to his teammate, Shiomi-Jenson, beat the Pioneer defender, and ripped the ball into the back of the net.

The final score of the game was 4-0, with Skyline taking the lead. The rest of Skyline’s season looks strong, and they hope to do well in districts, and even make it to states.