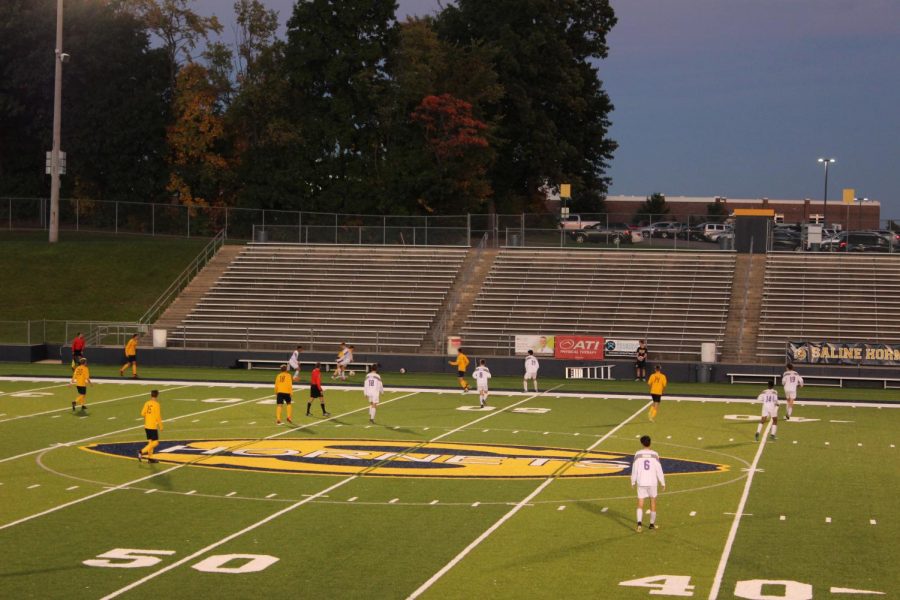 Pioneer High School men’s varsity soccer team took on the Saline Hornets on Oct. 4 2018. It was a cold fall night at the Hornet’s nest, as loud shouts were coming from the stands.

This was the first match between the Hornets and Pioneers this season, and the game ended with a rough tie 1-1.

As the game began and the whistle blew, both teams showed aggression and the demand to get a goal. Right from the beginning Saline did a good job of moving the ball down the sidelines through Pioneer’s midfielders and getting shots on goal. Frometas played for most of the first half of the game and made great saves on strong Saline shots. Pioneer improved their communication and steals throughout the game, making it difficult for the Hornets to figure out the Pioneers plays and giving Pioneer an advantage.

Pioneer defended well in the first half, and Saline pushed themselves to make clean crosses into the eighteen and communicated with each other. James Simon, a center defender on Pioneer, did an excellent job throughout the game, saving numerous attempts on goal. Ryan Nichols, an outside midfielder on the Saline team, always found his way down the side lines with the ball, creating attempts on goal.

After Frometas successfully saved a shot on goal, Charlie Rogers — a player on Saline and a former Pioneer student — went to retrieve a ball punted by Frometas and fell on the ground. Rogers, persistent to get the ball back from Pioneer, got up quickly and got the ball back, pushing a Pioneer player off their feet. Rogers was then given a yellow card and walked off the field quietly, not fighting with the referees.

With eighteen minutes left in the game, Frometas went to save a ball from an outside midfielder on Saline, and was kicked in the shoulder. Unfortunately, Frometas was unable to play for the rest of the game and will most likely stay out for the next couple games as well due to this injury. Substituting in for Frometas was Alex Szumko, who was quick to save the ball the rest of the game.

The first half ended with no goals scored but many attempts from crosses, free kicks and shots in the eighteen.

Within the first ten minutes of the second half the game started to heat up.

Nixon Holley was taken out in the box and was given a penalty kick in Pioneer’s favor. He had a shot on the keeper, Sam Herner, and scored a goal for the Pioneers with a low shot into one of the corners. As the ball went to the center, Saline was fired up and motivated to get a goal back. The ball had been forced to the outside and Saline had possession of the ball on Pioneer’s half.

Noel Sompa, a midfielder on Saline and former Pioneer student, went in to receive a cross from the outside. Sompa had controlled the ball near the eighteen and was positioned well allowing him to get a goal back for Saline.

Throughout the game many slide tackles and head collisions occurred, creating a couple injuries for the Pioneers, one being on the right side of the field on Pioneer’s side. Quinn Fox, playing forward, went to slide tackle the ball away from Marcus Powell, defender on Pioneer. Fox swept Powell off his feet, injuring his ankle in the process .

“Get up Marcus you’re fine, don’t go out,” Powell’s mother said. As this event occurred, everyone had a good laugh as Powell’s mother yelled at him to stay in the game. Powell got a free kick and also stayed in the rest of the game, fighting the injury.

The final score of the game was 1-1. Saline and Pioneer look on to the rest of their season with positive thoughts and plans to work hard.