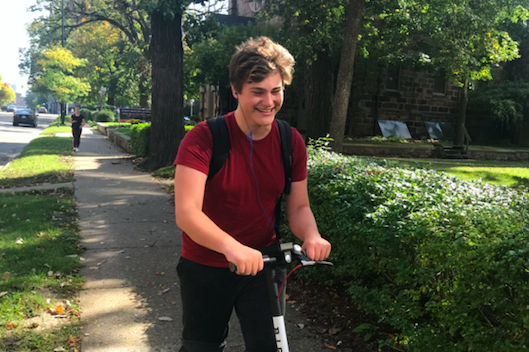 Community High junior Noah Pike takes advantage of one of community’s greatest attributes: close proximity to the University of Michigan. Every fourth block, Pike sets off on a mile walk to a lecture hall of over 100 college students in the World Languages Building to take Introduction to American Political Science.

“I’m really passionate about government, social studies, and political science,” said Pike. “It also gives me a chance to bond with my dad, who teaches at Saline.”

After emailing Professor Robert Mickey last spring for a chance to take his class, Pike becomes a college student for an hour and a half three times each week. Attending lectures and a discussion group, Pike is just another Wolverine.

“When I walk into the lecture, people don’t know who I am; I’m just another student,” Pike said. “In the second week of my discussion group though, our GSI (Graduate Student Instructor) told us to take a quiz, and there’s some sort of rule that he couldn’t grade a high school student, so I had to raise my hand and tell everyone.”

Professor Mickey must grade all Pike’s materials himself, as GSIs are contractually held to grade only the work of fully enrolled students, so Mickey teaches and grades Pike’s work ‘pro bono’.

However, just because Pike isn’t subject to the occasional quiz from a GSI, doesn’t mean he’s not liable to difficult coursework and harsh college level grading. With a midterm and final exam and to two important papers all adding up to 80% of his final grade, Pike has little room for error.

“With [readings] the volume is a lot,” Pike said. “As far as the tests, I haven’t experienced much of them yet, but it does make me nervous.”

The class itself consists of a big lecture on subjects including distribution of federal power, the roles of separate branches of government, specific clauses of the Constitution, and various Supreme Court cases.

“The class is especially interesting how we don’t all argue about what should happen,” said Pike. “It’s all about what actually does happen. Not if Trump should be president, but the politics about why he’s president now…”

Though political views on a polarized country are sometimes difficult to avoid, Mickey approaches the class with an outside perspective as a self-proclaimed Libertarian.

“He’s pretty funny,” said Pike. “He’s always making jokes about modern politics. He plays this character of not knowing what kids are doing these days and he’s younger than my dad.”

Close as the university may be, transportation is often an issue for Community’s CR students. Walking to lecture most days, Pike occasionally has trouble getting from Community to the School of Education each Friday for the discussion group.

“Getting to class is hard sometimes,” Pike said. “The first week, I showed up late to a discussion while they were talking about why being late was bad. I looked really stupid.”

To combat this issue, Pike has gotten creative.

“Most days I walk, but sometimes I’ll bike to discussion,” said Pike. “I have friends who will Bird [scooter] too.”

Though it is his first ever class at the U of M, Pike has gained some wisdom worth sharing to future CR participants.

“Never get behind on your reading; if you get behind you’ll never catch up,” said Pike. “I’ve been reading all these chapters, but the extra readings have been harder.”

All in all, Pike is happy with his class and continuing to work hard for the upcoming midterm.

“I like my CR. I didn’t even know anything about it, but now I get to see what college will be like,” Pike said. “And it’s good on your application!”