The abrupt replacement of the Mock Trial case 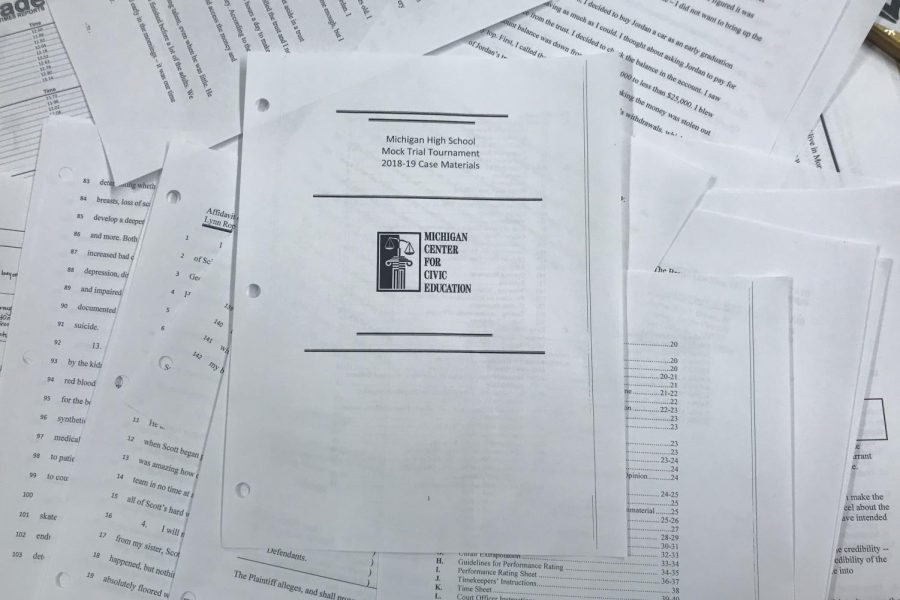 Chloe Root was working late at a friend’s house on Nov. 14, when she opened the email that utterly upended her plans for the next Mock Trial practice. The Michigan Center for Civic Education (MCCE) would replace this season’s Mock Trial case.

“I guess there was a little part of me originally that thought, ‘Are they really going to do this?,’” Root, the Mock Trial coach, said. “I didn’t really expect that this late they would [change the case].”

According to MCCE, the case was based on the 1990 case of Berhanu v. Metzger, and focused on whether a hate group and its leader were responsible for the actions of its members. Several teachers saw the case as too sensitive to take part in. Consequently, the MCCE Board of Directors voted to create a new case that would allow all students to participate.

“At first I thought, ‘Oh man, this sucks that people don’t have the courage to deal with these issues,’” Root said. “I don’t think we talk about them enough in our society, and we act like the stuff is so far away from Ann Arbor in particular. But as I thought about it more, I thought, ‘Well really, I don’t think it’s a good idea for people to be dealing with these issues, if they don’t have the proper support.’ If I was a coach who is trying to deal with this on my own, I would feel much more stressed out.”

In contrast, Community’s Mock Trial has multiple volunteers, acting and lawyer coaches, putting them in a position to deal with some of the most difficult cases. Nonetheless, changing the case was a holdup for the CHS Mock Trial team.

“This was something we’d been working on for almost two weeks,” said Martha Ribant, a sophomore and current Mock Trial member. “We were having auditions [for the case] really soon.”

The MCCE plans to release the new case materials on Wednesday. Though this is only a short delay, the new case brings with it cause for worry.

“I have two main concerns,” Ribant said. “One is that it’s going to be a rushed case. Two, and this is the more realistic one, is that the board is going to be too concerned about offending people. I’m concerned that our case this year is, in the act of trying not to offend anyone, going to not be real.”

“I’m excited to spend my first day of break reading the Mock Trial case and I’m just going to try to put all of my energy into enjoying a new case,” Root said. “I think we’ve got so many new members who are great and so many returning members that are stepping up, that I feel very energized about this even though there’s this small setback with the case.”