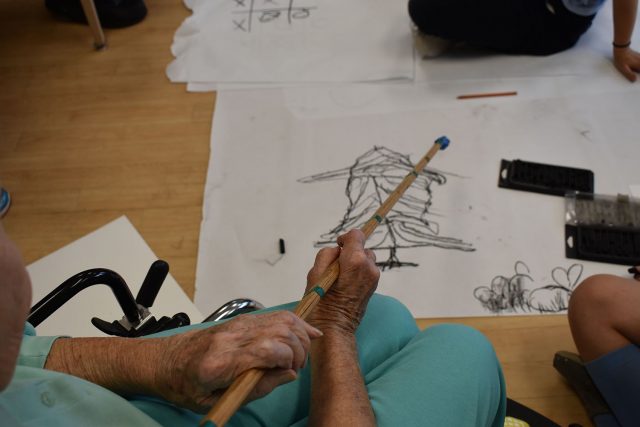 We had sat in the hot, tightly packed yellow school bus many times over those three weeks, but the first bus ride to the dementia center was different. Usually, the bus was filled with loud chatter and laughter, but that time a low, anxious murmur hung in the air like a thick cloud.

This summer, I was a part of the new program at Interlochen Arts Camp called Citizen Artistry, where we made art for and with the communities of Frankfort and Traverse City. Each day, we traveled out to the Great Lakes Children’s Museum in Traverse City, the Warehouse District in downtown Traverse City, or the Paul Oliver Memorial Hospital in Frankfort.

The Paul Oliver Memorial Hospital was the most memorable place we worked. We had the opportunity to make art with dementia patients, and it was the first time we were making art directly with people.

After stepping off the bus, we were led through the hospital to the living center. It was a cozy hideaway inside the sterile hospital. Large windows lined the walls of the television room, and patients sat in front of the screen. Their eyes were glued to the old black and white movies from their past.

Dementia is an umbrella term for symptoms of memory loss. Alzheimer’s and Vascular Dementia are the two most common types. People who suffer from dementia progress to different stages, all varying in severity. Eventually, dementia can cause the deterioration of speech and judgement skills, as well as memory.

When we met with the activities director of the dementia center in the hospital, she told us that art, music and dance improve the quality of life for people who suffer from dementia. People who have dementia may not always recognize their own family members. However, they still recognize the love between them and their family.

The space the center gave us to work in was the activity room. It was a large room filled with foldable tables, and the five wheelchair bound patients we worked with were seated around two tables. We set out an arrangement of watercolor paints, polymer clay and thick stacks of paper. Our assignment was to make art with the patients and to have them take the lead. We were told to talk to them about what they could remember from their past. It was a tricky assignment: I had never made art with someone who was not an artist before.

The first day, I worked with a woman named Tina. She was outgoing, and she expressed herself in her brightly colored outfits. She carried her plush llama stuffed animal with her, and she propped it up so it could watch us make art.

Tina was different from the other patients that I got to work with. She loved to talk, but her dementia advanced far enough that her speech was incoherent. As I sat next to her and tried to get her to paint with me, she was insistent on watching me first. I handed her the paintbrush after creating a few thick, colorful lines. Her frail, veiny hand trembled as she made brush strokes. She gave up, sat the paintbrush down, and returned to talking.

Every so often, when something I said in conversation or something that I painted sparked her interest, the first couple words of her long tangent were understandable. Her eyes would light up with life, and she would flash her crooked teeth as she smiled at me. I could not help but smile back.

The activity room seemed to warp time. We stayed for three hours, but it felt like we had been visiting with the patients for only a half hour. Towards the end of our first visit, Tina grabbed my hand. Her warm, delicate hand cradled mine, and she rubbed her fingers against my skin in a comforting way. She was talking on and on, and even though I could not understand what she was saying, I knew that she was trying to teach me something. The way that her mouth curled up into a smile as she talked resembled the excitement of teachers I have had in the past.

Saying goodbye to the patients each day was bittersweet. We were sad to go back to camp, but we knew we had made a difference with the patients. Many of them do not often receive visitors, and seeing our young, fresh faces was new to them. At the end of our last visit, we had formed strong bonds with the patients. All eight of us found ourselves leaving the hospital teary-eyed, and eventually we all sobbed on the bus together.

It was strange to see our art directly impacting each other, as well as the patients. Before I joined Citizen Artistry, my art had been strictly confined to the walls of my bedroom. The farthest I would branch out with my art was to work on it in a studio. All of the art teachers I have had in the past have told me that as an artist, my work has so much impact on myself, and my community. I always brushed this off, and figured that they meant professional artists. I did not realize that even as a teenager, what I do has a large effect on different people.

Each of the patients of the Paul Oliver Memorial Hospital were at different stages of dementia. Some did not speak at all, while others seemed perfectly functioning. However, my peers and I used different strategies to connect with each of them. Some of us communicated strictly through line, color, form, or shape.

From that hot week in early July that I spent at the dementia center, I learned a valuable life lesson. Not only did I learn that my art actually has an impact on other people, but I also learned that art is a universal language. Tina loved to talk, but few people could comprehend what she was saying. When we drew or painted something in front of her that sparked her interest, she became more comprehensible for a few seconds. Although she was insistent on watching me make art instead of making it herself, it still felt like a victory. She was surrounded by art, and I could see how every so often it would change the direction of her conversation, or spark a new interest.

The same happened with other patients I was working with. Margot — a woman from Germany who’s dementia was not as severe as other patients’ — remembered quite a bit on her own. When she described what her childhood house looked like, she remembered more as she saw me drawing it in front of her. When I drew things that she was interested in, like a piano, her glossy eyes perked up with excitement.

I have been able to communicate through art with people who speak different languages as well. Since Interlochen is a world-renowned camp, I have had many peers from different countries. Often times we do not all speak the same language, but when I circle the room to look at everyone’s pieces, they’re all  easily identifiable. A line is still a line no matter where you are in the world.

I will use the lessons I learned this summer from here on out in my life. I now know that I can use art to convey a message I cannot always describe in words, or as a message I want the whole world to know. I can also use art to communicate with different people, and enrich my life, as well as those around me.