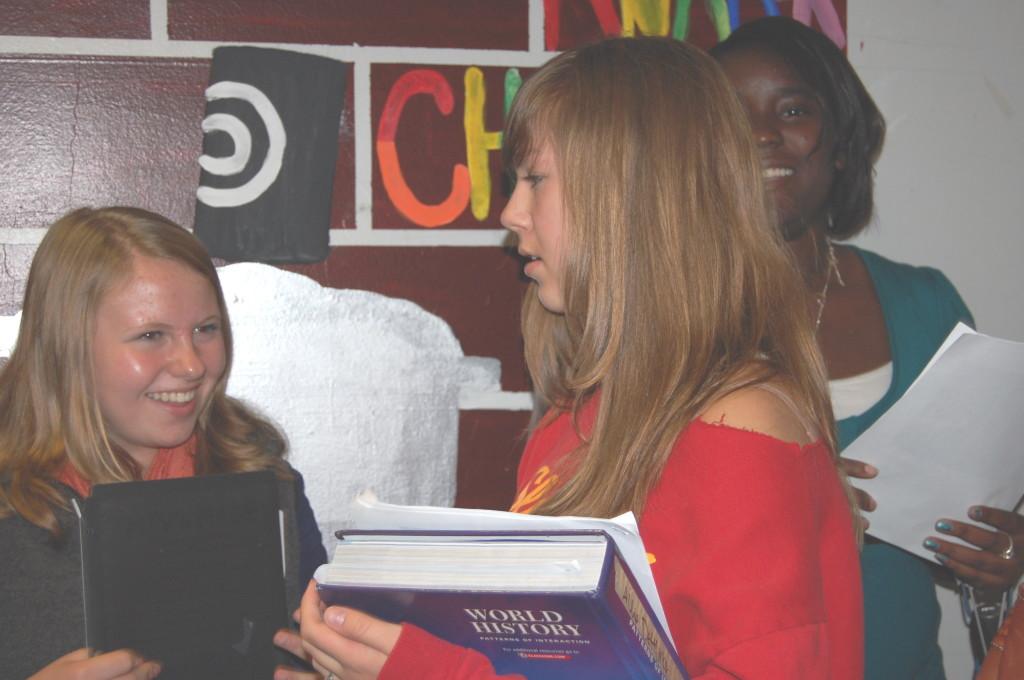 Sophmores Claire Lauer and Allison Dettling wait to be called for auditions. They hope to become a ballroom dancer and a model respectively.

Arielle Pipkins is the kind of person whose glasses match her shoes. Her carefully selected clothing and painted nails give off a feminine impression. During the day, she attends classes and socializes just like any other student at Community High. However, during the spring of her sophomore year, she came home from school muddy, sweaty and exhausted.

Growing up with a father who coaches, and brothers who play, Pipkins, a senior, has always been exposed to football. During her freshman year at Community, Pipkins decided that she wanted to be part of the action. The opportunity presented itself in the form of a reality television show.
Pipkins, along with 20 to 30 other students, auditioned to be filmed for MTV’s MADE. This reality show profiles high school students who want to step out of their comfort zone and try something completely new. They are set up with a coach who teaches them the basics of their chosen activity. Each student’s struggles, as well as triumphs, are distilled into half an hour of television.

The auditions took place during the spring of 2008 in the CR office at Community High School. When it was her turn, the MTV employees asked Pipkins a few simple questions. The interview involved standing in front of a camera and relating why she wanted to be a football player.
Understandably, Pipkins was nervous. “I’ve watched the show so many times,” she said. Having seen so many episodes, Pipkins was curious to see what went on behind the scenes.

It is ironic that the interview that changed her life only took five minutes.

Those close to Pipkins were surprised when they learned of her ambition. Her friends were unconvinced she could put in the work necessary to become a football player.

At first, Pipkins’ parents weren’t sure about her football dream. They were hesitant to agree to the T.V. show. “My dad always told me ‘No,’ so why not go for the show? He can’t tell me ‘No’ now,” she said.

Even Pipkins herself was apprehensive. “I’m really girly so it’s kind of hard to imagine me playing football.”

After a week of nail biting, there was a phone call.

MTV called Pipkins’ house and her mother received the news. As soon as Pipkins got home, her mom told her to “call back and you’ll see.” After speaking with Heather from MTV, Pipkins discovered she had been chosen to be MADE. She said, “I just screamed at the top of my lungs. I was so happy.”

On the phone they told her they liked her personality and style. Pipkins remembers, “They though I was a ‘cute little girl.’ ” Pipkins was on her way to becoming a football player. She answered several more questions on the phone and was accepted. She was met with a more supportive attitude than she expected from her dad. Her family as well as her friends were elated.

The excitement was too much. Pipkins told a friend her secret, even though she wasn’t supposed to. She was overwhelmed and remembers thinking, “Oh my God! I can’t believe this.”

This all happened quickly. Several days later it began. “It didn’t hit me until they came and started filming.” For a week, cameras followed Pipkins wherever she went. They captured her getting out of bed, hanging out with friends, going to a regular day at school, working out, practicing with the team and eating dinner with her family. At first it was awkward, but Pipkins quickly became used to the attention. “I was just acting like me.”

The coach of the Huron Football Team made it clear that he wouldn’t treat her differently even though she was the first girl to try out. It didn’t matter that she was female, or that there were cameras watching from the sidelines.

The reality of shooting a T.V. show was different than expected. Pipkins was surprised by what the process entailed. She felt that often the filming was staged. “I felt like it was kind of fake,” she said, since she was told what to say and what to do. Often she was told, “Act like you can’t do this,” which she recalls made her feel foolish.

Although Pipkins enjoyed some of her filming, her disappointment overshadowed the positive experience. When the camera crew was done they left, and life went back to normal. They would return in the fall to film football try-outs. During the summer she had time to reflect.

The experience wasn’t what she thought it would be. “I didn’t like how they made stuff look,” she said. Before they came back she called MTV to cancel the filming. She remembered they weren’t surprised or disappointed. The representative told her it wasn’t the first time someone had backed out of filming.

Pipkins decided that becoming a football player wasn’t as important as retaining her integrity.

Pipkins went to school in the fall without her uniform and cleats. She has moments when she regrets not taking her chance to be on T.V., but Pipkins says, “It’s not a big deal to me.”

As a new round of MADE hopefuls auditioned on September 30th, Pipkins was reminded of her time in the spotlight. Although being on T.V. is a glamorous way to achieve one’s dreams it doesn’t always represent reality.

That day, Pipkins looked wistfully at the excited students eagerly awaiting their chance at fame. It is easy to see how she debates whether or not to support the fantasies of her peers, or explain to them the reality of her experience.

Now Arielle Pipkins is finished wondering if the dreams she saw come true on T.V. were genuine. She recalls, “I stopped watching because I knew how fake it was.”