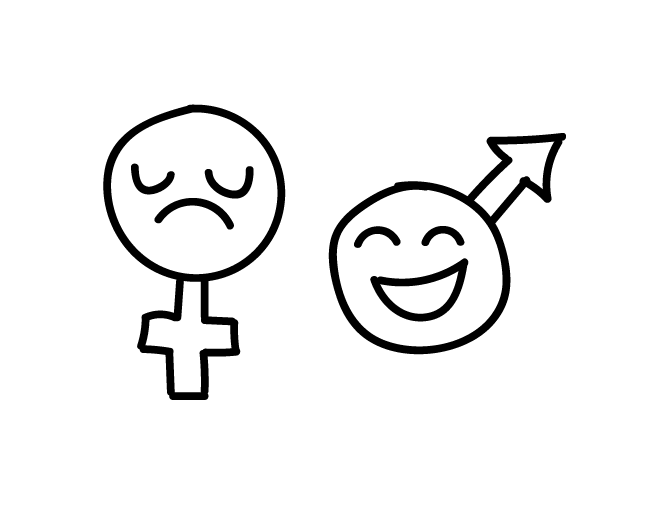 Ironically, it was a male college admissions board member who awakened my feminist conscience. Sitting around a small wooden table in the counseling office with four other girls at a women’s college visit, I asked a question which would drastically change how I looked at my academic and social life: “Why would I want to go to an all girls school?”

He responded with a series of questions: “How often do you raise your hand in class and begin by apologizing? Do you feel uncomfortable contradicting or questioning points made by your peers? When working on group projects with boys or asking them for help are they often condescending? Do you ever feel embarrassed when asking questions in class? Taking all of these questions into account, why wouldn’t you want to go to a women’s college?”

These ideas stuck with me; I had never considered that my gender affected how others perceived my intelligence level, or with my confidence in speaking out and asking questions. After taking into account his response, I began to notice a pattern. My female classmates, myself included, seemed more hesitant to ask questions, and much more apologetic about asking them than our male counterparts.

“Speaking from my own experience, as a girl who has a lot to say, I notice that, for whatever reason, teachers encourage boys to speak out in class much more than they do girls, and that can result in girls being more inclined to watch what they say, and how often they speak,” said Leah Fleming, Community High School senior. “I don’t think it’s a bad thing that teachers try to engage boys more… but it often results in outspoken girls feeling penalized and apologetic for sharing their thoughts with the class.”

The phrase “I’m sorry,” prefaces many —  of my own, my female peers’ and even role models’ — statements and questions, no matter if we are at fault or not.

I don’t want to come off too strong or seem abrasive, as if I’m trying to outshine others, or like I’m talking too much or too little. I am constantly struggling in both high- and low-stake situations to find a happy medium where I can make a positive impression, without overdoing it; sound smart, but not pretentious; seem kind, but not fake.

Even when I do manage to achieve a goal, I can’t help but feel like an imposter when I get there. Despite my qualifications, I lack confidence in myself to feel like I belong anywhere, especially if I had to work to get there.

The Atlantic interviewed a number of successful women and found a great shortage in female confidence. Two experts in the field, Claire Shipman and Katty Kay, found a number of possible reasons for the confidence gap between men and women, including the fact that boys are taught at a young age to build a thick skin in a way that girls aren’t. The pressure boys have grown up with to let insults and loses roll off of their backs was established when they were taught to be competitive in sports and to throw friendly insults around.

Men learn these life skills at a young age, and then carry them into school and eventually the professional world. Women, on the other hand, are taught to pay close attention to everyone else’s feelings, to be kind and good, and are reprimanded for being bossy, pushy or assertive as young girls. As girls go on and follow the rules set out for them, they become less and less comfortable with being in trouble and making mistakes, while boys are brought up to do things that may put them in these situations.

“[Men] are thinking less about judging their own performance,” Shipman said. Men are so used to making mistakes and being made fun of from years of experience that for the most part they are more likely to risk looking foolish.

We can’t change what we were taught as kids, and we can’t change how it has affected us throughout our lives. We can, however, take a step back and realize that these things don’t have to define how we present ourselves. My lack of sureness in myself is not due to incompetence. Despite what I have been taught, my thoughts and opinions have as much value as those of my male counterparts. Being aware of the confidence gap has inspired me to speak out more than ever. I hope that the women whom I once joined in saying sorry will join me in becoming unapologetic and making our voices heard.