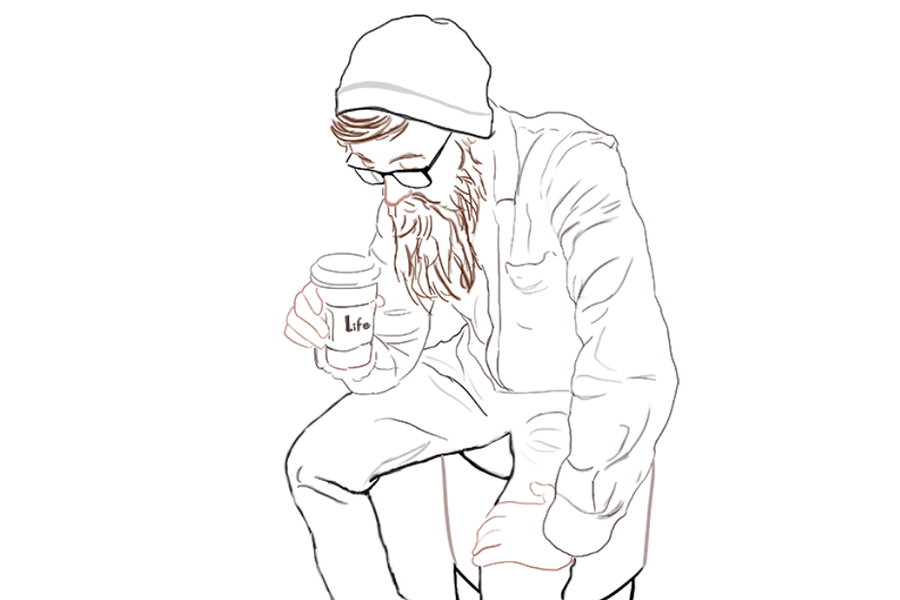 Robert Morgan imitates the pose of The Thinker, the famous sculpture by Auguste Rodin. A statue of a man lost in thought, The Thinker became associated with philosophy. “The best thinking gets done when you're very bored,” Morgan said.

For Robert Morgan, the distractions of life, whether it be work or playing games, makes the meaning of life feel remote. The everyday falls into monotonous and automatic thought. With a long walk or drive, however, the rush of repetitive days slow, and the time to think arises in its place. What feels like life-or-death in the moment is revealed to be a momentary blip in the greater context of one’s life.

“[The best thinking is] good at contextualizing the things you do, when you don’t have any choice but to confront the reality of your thoughts,” Morgan said. “It’s so easy to get caught up in the immediacy of what you’re doing, and the importance of everything you’re doing, but I think there’s a lot more to life and its important to stop and think about that and reflect on that.”

“A lot of people think not having a purpose in life is sad, but I don’t think it is,” Morgan said. “I think it’s actually a very liberating fact because you get to decide what that meaning is.”

Even with the choice of deciding the meaning of life, Morgan finds it difficult to always act on such meaning.

“Society is very convincing, that as much as we like to think that we have individual choices and options, it’s very, very tough when society makes such a compelling argument mainly in a monetary form of, ‘You should do this because this is what we’re paying you to do’,” Morgan said.

As a high schooler, Morgan travelled extensively and lived with a host family in Osaka, Japan. While their lifestyle was not radically different from his own, the small differences between their lives made the things he had taken for granted, like showering in the morning, stand out. It gave him the opportunity to think about what his own life was.

When a counselor encouraged him to take whatever classes he wanted his freshman year in college, Morgan chose a philosophy class. It was not the first time he had grappled with many of life’s toughest questions, but it brought a fresh way of looking at them.

“I’d never really studied those questions before,” Morgan said. “Part of taking up a philosophy class was the cool experience of like, ‘Here’s what this person has said!’ and getting a lot of different perspectives and I think coming to more informed decisions about what the world might be. You are not the first to discover that life isn’t what maybe what you thought it was, but two, with that, you’re not really the only person feeling or thinking this, which I think is comforting to me.”

Morgan feels that typical high school thinking or discourse does not lend itself to a very thoughtful and balanced way of looking at the deeper questions.

“I think it’s easy to look at people and think, ‘All these people are boring and in my way, and I’m smart and I know things are, and everyone else is just annoying or they don’t understand things like I do’,” Morgan said. “It’s important to recognize and be empathetic and kind of know your tiny skull-shaped kingdom, to quote David Foster Wallace, is not the only one.”

Morgan wanted to communicate the experience of examining a variety of different philosophical perspectives he had in college to high school students. This inspired his Philosophical Literature class at Community High School, creating a space for students to explore difficult questions. One such question is what to get out of life.

Ultimately, what Morgan wants out of life is something he believes is what many people want. It is to be remembered.

“I think life is just raging against the cold nothingness of everything else, and really, as humans, our best trait as a species is that we can pass on something from one generation to the next,” Morgan said. “I think literally the best thing you can do as a person is to leave some sort of lesson or story for those in the future who can learn from your story and hopefully inch just a bit closer to whatever the next step is.”

The lesson Morgan would want to leave behind for the future ties closely to his perspective on the meaning of life, that ultimately, people are free.

“I think people forget that sometimes, and that sometimes you feel so locked into a choice or an option but that’s not true,” Morgan said. “It’s like you can work towards whatever you want and with sufficient hard work there really is quite a lot you can do. But it is the hard work part that we often forget.”