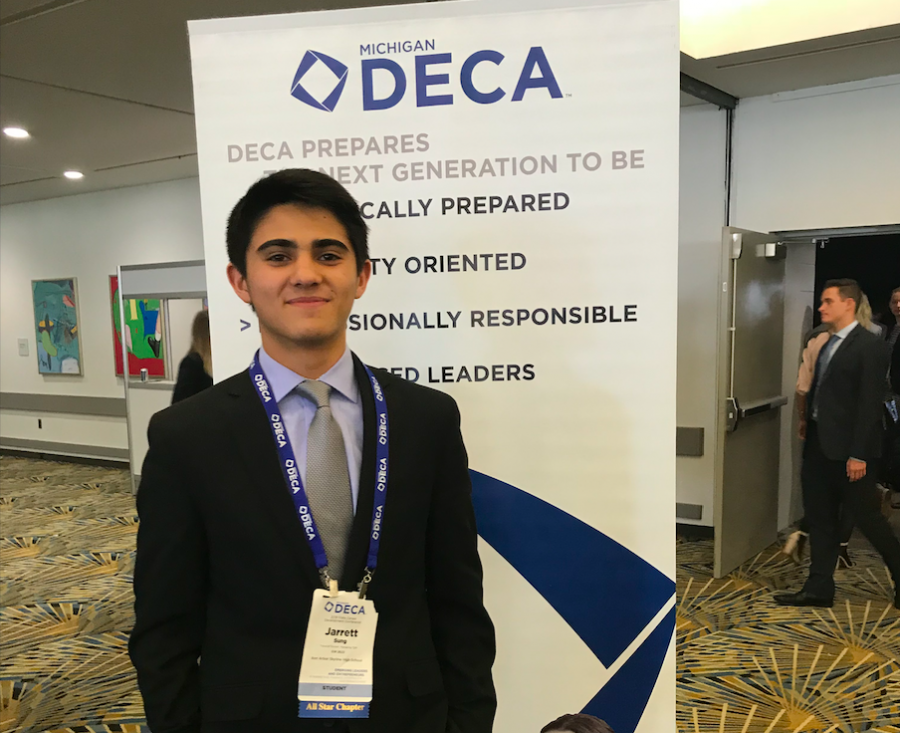 “So how would you go about rewarding new customers and growing our product?” Ben Stack looked up from his notes, and across the desk at his judge. He took a deep breath, put his nerves aside, and began to confidently reply, “My vision is all about the customer experience…”

Stack, a Junior at Saline High School was at the DECA (Distributive Education Clubs of America) state qualifying conference, participating in an excercise where hight school students are presented with problems and must make mock business decisions. DECA is a program that teaches students interested in a future in business about real life marketing and sales issues in a competition format.

On Thursday, January 11th, a dozen school DECA teams traveled to Eastern Michigan University to participate in business simulation activities. Each paticpant competed in a business role play situation and a fundamentals of business test to advance on to the state conference in Detroit.

“I’m very excited to go,” said Skyline Junior Ben Zebrowski-Rocheleau. “The experience at Cobo Hall with the whole club, and the weekend in the city, it’s all very fun.”

While Rocheleau will be advancing to states via his written business proposal,  most other competitors had to complete a marketing role play scenario. After receiving a prompt, each participant has 10 minutes to write down notes on what they want to say to their judge. After the time allotted, each student sits down with a judge, often playing a CEO or manager, and conveys their creative business strategy to solve the problem at hand.

Stack participated in the “Sports and Entertainment Role Play” event, and was asked to play the role of a marketing director pitching an idea for a fictional DVD service similar to Redbox. He then needed to demonstate how to recruit more customers, and the best type of loyalty plan to institute.

“I wasn’t too nervous,” said Stack. “I don’t know how much of the situation I’m allowed to talk about, but I just went in there, started with a firm handshake and began my pitch. It’s really all about confidence.”

After qualifying for the state competition, Stack received two medals: One to commemorate his ascension to the next level of DECA competition, and another to recognize superior achievement on the test taking portion.

“Making states is the goal of course, but an extra medal for the test really showed my hard work pulling through,” Stack said.

Since its founding in 1946, the DECA organization has continued to pursue its’ mission of preparing emerging leaders and entrepreneurs for careers in marketing, finance, hospitality and management in high schools and colleges around the globe.

“It doesn’t just look nice on a college application,” said Skyline Junior Jarrett Sung. “It really prepares me for the future, and handling pressure situations. These skills are going to give me a leg up in college and life.”