The rising sport of competitive fishing 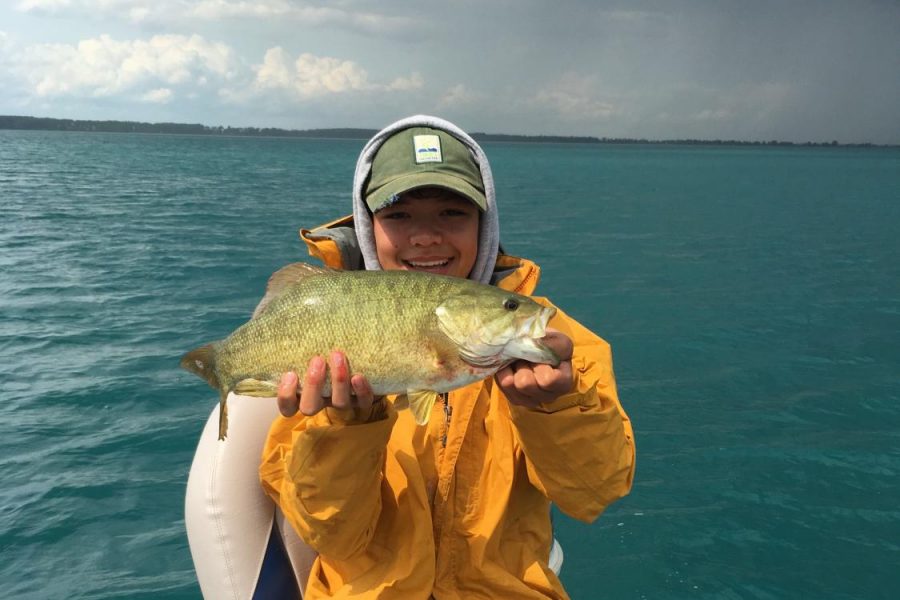 Tang gets his first “keeper” of the day at the St. Claire tournament. A “keeper” means he caught his first fish above 14 inches.

Eight years ago, Nikolai Tang, was just two miles from Community High School (CHS). It was the summer, and he was at Huron River fishing for the first time as a seven-year-old with his dad. There he learned the basics of fishing and what it was like to actually catch a fish, but little did he know, eight years down the road he would be regularly be competing in bass tournaments.

That was his first time fishing, but last summer the CHS sophomore joined his first competitive fishing club –– Glacier Lakes Bass Club. After a friend recommended the club, Tang joined in hopes of transforming his passion of fishing from a hobby into a competitive sport. In just one summer, he has already competed in around 10 bass tournaments in lakes around Michigan and Indiana.

A demanding schedule is required to competitively fish in the bass tournaments. For Tang, he and the rest of his club usually have boat launch at 6 a.m., which can only happen at the safe light –– the time when it is safe enough to drive boats out on to the lake provided visibility is clear due fog or any other weather constraints.–– Depending on what lakes the tournaments are held on, Tang might have to wake up as early as 4 a.m. to get to the boat launch on time. When everyone arrives, the club fishes for around eight hours.

At Tang’s club, they have a 14 inch minimum for the bass, meaning a participant can only keep fish above 14 inches to weigh at the end of the day. Anything fewer than 14 inches is put straight back into the lake. Each participant can only bring five fish back to the scale, and the highest total weight of a participant’s five bass wins a portion of all the entry fees. Second and third place also win prizes, and more money is awarded to the participant with the single heaviest bass.

Throughout the day, if anyone catches a bass larger than a previous one that they caught, they can cull it out –– meaning that they release the smaller fish so it does not count toward their total weight at the end of the day.–– When dealing with the fish, participants put water into bags  and transfer what they catch into the water-filled bags. When it is time to weigh the bass, the fish are briefly put into a mesh net to be weighed before eventually releasing everything that was caught back into the lake.

Since Michigan is limited for prime fishing weather, the summer is when tournaments will be held every other week. Since he joined this past summer, Tang has competed in around 10 tournaments, but his first tournament win was at Wamplers Lake. It was just his third time competing. Since he is younger, he goes out with another angler. An angler is just another person that fishes with a rod and line and drives the boat for Tang.

“[My angler and I] both did pretty well all day,” Tang said. “We both got our limit of five fish, and I really was surprised when we got in and no one really seemed to do as well as us. I weighed second so I was in the hot seat, and I was waiting and no one topped me. But my friend who actually got me in the tournaments won ‘big bass’, which is another award you can get, and [the winner] gets the pot that everyone pays in the beginning.”

His total for his five bass was 11.4 pounds. After no one could top his final weight, he won a portion of all the entry fees. He finished with $140 but if he also had the biggest bass, he could have reached $200.

Tang is the youngest member of his club and besides the few other teenagers, the rest of the club’s members are all adults. One of the reasons Tang does not think there are as many kids is because some do not take it as seriously and it can get really expensive. Between the rotation of all the gear that is necessary, things can break which adds to the cost of the already expensive sport.

According to Fishing League Worldwide (FLW), competitive fishing is one of the fastest-growing collegiate sports, and even before Tang began to competitively fish, he watched the National Bass League and the FLW. Watching the professional bass leagues helped influence Tang on competitive fishing.

“I’m not sure if [competitive fishing] is getting bigger, but there is definitely a strong following,” Tang said. “There’s a strong base already and growth may happen.”

Tang hopes to be somewhere other than Michigan in the near future to able to fish year-round. He has fished at Georgian Bay on Lake Huron in Ontario, and even has had the privilege to fish in Xiamen, China. Tang once fished on Lake Kentucky in Tennessee, and he would love to go back there for college, as some schools are offering fishing teams.

“I think [fishing] is a good balance,” Tang said. “It is a really good meditative practice… you are out in nature, and it is also really exciting too. When you have a fish on, or you are trying to net someone’s fish –– it’s also a lot of adrenaline.”