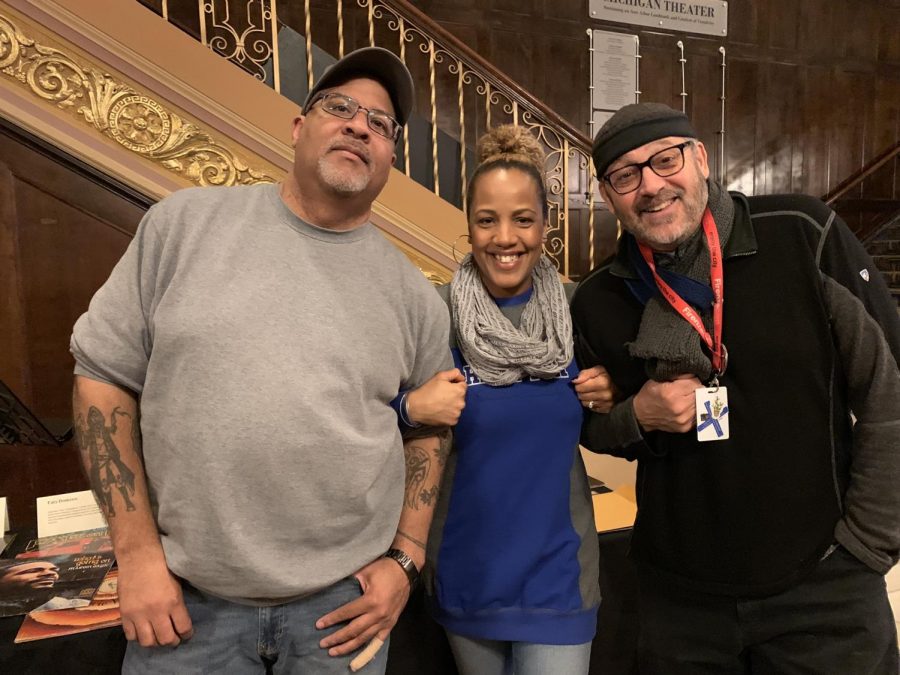 Left to right: Kevin Davis, Janelle Johnson and Steve Coron, preparing to go inside the theatre. Johnson made sure her forum got to sit in "prime real estate" watching the film.

On Feb. 27, 2019, Community High (CHS) students and faculty gathered at the Michigan Theater to watch “Black Panther” for the Not School As Usual Black History Month celebration. In the lobby of the theater, students were greeted by covers of famous jazz musicians such as Louis Armstrong and Clifford Brown performed by CHS jazz band, Unified Field Theory. Along the perimeter of the lobby, tables displayed books, records and items that highlighted African American history and culture from the past and present. Some displays included the works of artists such as Langston Hughes, Zora Neale Hurston and Spike Lee.

The Not School As Usual day was planned and organized by Janelle Johnson and the Black Student Union (BSU), as well as Forum Council and CHS’s Dean, Marci Tuzinsky. Johnson and BSU decided to focus this year’s Black History Month theme on the African American arts.

Before the screening of Marvel’s “Black Panther” began, English teachers Robert Morgan and Matt Johnson, as well as the vice president of the Ann Arbor Board of Education Bryan Johnson, were invited to debrief the film. Matt Johnson talked about the movie from a film teacher’s point of view, describing the reasons why “Black Panther” should have won best picture at the Oscars.

His reasoning was simple: not only was it the third highest grossing movie of all time, but it also touched on concepts that are not commonly seen in Marvel films. He alluded to the mention of centuries of European colonization and the annihilation of culture in Africa in the film; how the nation of Wakanda kept their collection of Vibranium –– a magical metal that can create great technologies and inventions in the film –– to themselves and camouflaged themselves as a developing country, escaping events like Apartheid and the Transatlantic Slave Trade. In the film, Wakanda’s main enemy, Klaue, is a white British man that wants to steal the vibranium for his own good — similar to European colonizers who stole both people and resources from Africa.

Johnson also touched on how the film responds to colonization. In the film, Michael B. Jordan portrays the character Killmonger, who is a Wakandan living in America, and wants to help oppressed people in the world revolt against their oppressors with the help of Wakanda’s vibranium, arguing that it is unfair to keep one of the world’s most valuable resources when people that look just like them need it. In addition, Johnson pointed out how two women had a large role in the production of “Black Panther”; the movie reflected women’s strengths, making the smartest character, the wittiest, and the most powerful warrior in Wakandan society all women. Finally, Johnson spoke of diversity, and the importance of “Black Panther” and it’s predominantly African American cast.

“Diversity is often viewed as something people tiptoe around, and they’re worried about talking about it as opposed to what I think it really is, which is a huge advantage,” Johnson said.

Literature and graphic novels teacher, Robert Morgan, was next to speak after Johnson’s talk on diversity and the African culture in the film. Morgan led off his talk addressing the rivetting question that he had heard about the film: ‘how can a superhero movie be meaningful?’ He stated that anyone could just sit back and watch the action-packed scenes of the film, but he instead proposed the idea that comics, and “Black Panther” in particular, were always about more than just men and women in suits.

Morgan then continued to speak on the History of the “Black Panther” comics. Black Panther was first introduced in Marvel’s Fantastic Four no. 52, just two years after the passing of the Civil Rights Act of 1964. Black Panther received its own series a few years later, and Morgan emphasized that this is when Black Panther’s struggles were not merely fiction.

One of Black Panther’s first solo appearances features him attempting to solve a murder in Georgia where he ultimately unmasks a leader of the Ku Klux Klan. Morgan mentions that in doing so, Black Panther unmasks the myths racists use to justify their bigotry. In later years, Black Panther grappled with racial division, and was featured in issues involving police violence, supremacists and genocide. Morgan’s primary takeaways were that Black Panther comics always sought to deal with the weight of oppression in our world, and that Black Panther has always struggled with the means by which the oppressor should fight their oppressors.

In the film, King T’Challa and Killmonger are framed as opposites in the struggle for leadership and the right to be the Black Panther. The movie focuses on the difference of opinions and policies of the two main characters and how T’Challa prevailed.

“Sometimes the right, but the most difficult decision is to make yourself vulnerable,” Morgan said. “To take the trauma the world might throw at you and learn from it. To turn it into growth, into art, and ultimately into a power all on your own.”

Morgan closed by mentioning that King T’Challa in the film truly saves the world when he leaves his walls, opens himself up to the possibility of new ideas and helps those who need him no matter the physical, personal or political cause.

The final speaker of the event was Bryan Johnson, a member of the Ann Arbor Public Schools Board of Education. He talked about the societal influence the film has had in America.

“Black Panther” helped bridge the gap between Africans and African Americans, and it started to diminish the animosity between the two. It helped both groups relate themselves to a common ancestor and allowed both groups to take a look into what a world would look like without the Transatlantic Slave Trade, Colonization, Jim Crow and mass incarceration.

Johnson also explained the metaphor of vibranium and how it is a real resource — in that it is the idea of cultural unification and that Black contribution is all around us, just as the halls outside of the theatre.

This year’s CHS celebration of Black History Month was incredibly successful in spreading the message BSU hoped to deliver. The theme of African American artists combined with the screening of “Black Panther” created strong recognition for this month’s Black History celebration.