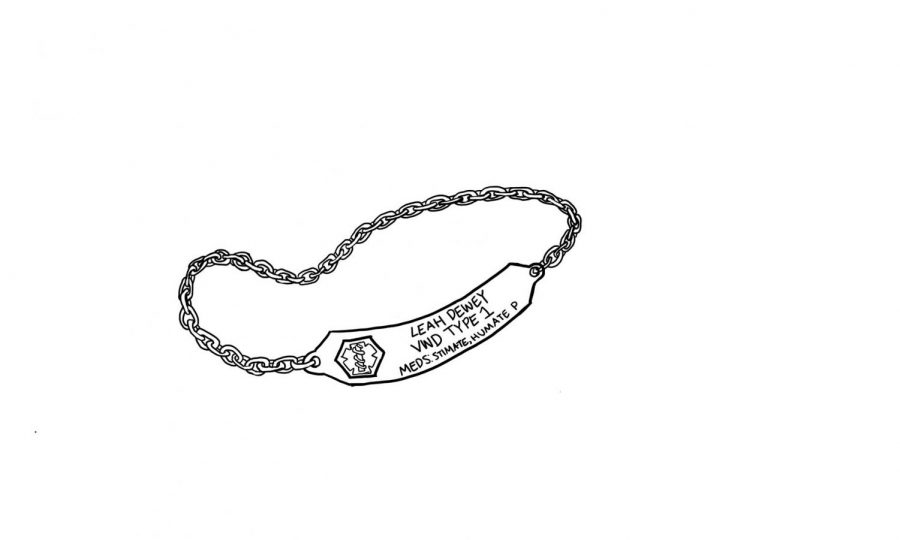 Note: In this article, there is mention of self harm and depression. If you or someone you know deals with these topics, contact the National Suicide Hotline at 1-800-273-8255, or if you are a CHS student, reach out to one of the Depression Awareness facilitators.

At 11 months old, Leah Dewey was found standing up in her crib, looking her mother in the eyes with her cold, black eyes. Dewey’s skin was pale and she was covered in her own blood. Her sheets and crib were also covered in her blood.

This was Dewey’s first bleeding episode.

Three months prior, Dewey had been diagnosed with anemia, low red blood cell count that can lead to poor oxygen circulation in the body. Her mother had noticed that when she picked up her daughter, hand shaped bruises were left on her body. Dewey’s parents had to go through background checks to make sure that the cause of Dewey’s bruising was not abuse before the doctors could consider anemia as a possibility.

During Dewey’s first bleeding episode, she had gotten a nose bleed. Since the blood in her body could not clot, she kept bleeding. These nose bleeds continued into her elementary years, during which blood would trickle down the back of her throat. Similar to the nose bleeds, small cuts would bleed excessively.

When she was younger, she was at a friends house cutting yarn. Her friend accidentally cut her finger, and even though it was a small cut, there was a lot of blood. Dewey’s mom had to come over and administer Stimate, a medication Type One Von Willebrand’s patients often take.

DDAVP is a nasal spray that is quickly released into the bloodstream and squeezes the Von Willebrand proteins stuck to the walls of the blood vessels to help clot bleeding. When Dewey was younger, she would carry her Stimate with her most of the time to help her during bleeding episodes.

Once Dewey started menstruating, she noticed that her periods were a lot heavier than other girls her age. She would go through around six pads a day, and her periods would last anywhere from 11 days to a couple months. Once, within about 30 minutes, Dewey even bled a puddle in her chair during her seventh grade science class.

Many women are diagnosed as anemic due to excessive blood loss during menstruation. However, anemia is a blanket term and often the tip of the iceberg; many other serious diseases can cause anemia, such as leukemia and other bone marrow disorders. It is easier to identify the symptoms of anemia before identifying the cause. In Dewey’s case, her anemia was likely caused by her Von Willebrand’s Disease.

Dewey takes advantage of the clinic at the University of Michigan for young women who have bleeding disorders and how they affect the reproductive parts of their bodies. The clinic — called the Collaborative Gynecology and Hematology Clinic — is a familiar place for Dewey. She recognizes other patients that go to the clinic, and does not have to explain her disorder every six months when she goes in for her regular checkup.

In the summer of 2016 after seventh grade, Dewey started to take birth control pills. Once her periods became regular and she got tired of how heavy they were, she and her doctor decided on birth control. Birth control boosted the estrogen levels in her body, an important hormone that helps produce the Von Willebrand protein. Since the hormone is produced in cycles, women are more susceptible to bruising and bleeding when estrogen is not being produced as much during menstruation . From taking her 60 milligram dosage each day, she noticed her other hormones would fluctuate unpredictably — anywhere from mood swings to fatigue and depressive states.

“My relative at the time was severely depressed, and she had cut herself all over her body,” Dewey said. “I remember looking at the scissors, and kind of being like, is that what I’m supposed to do? I would just keep scissors in my room and look at them every once in awhile, then I’d wake up the next morning and I’d be like: that’s crazy, I don’t want to do that.”

After deciding birth control pills were not the best option for her, Dewey decided to get an IUD. This form of contraception sits in the uterus and regulates hormones to stop menstruation. In contrast to regular birth control pills, not all of Dewey’s hormones were affected. In addition, Dewey has not gotten her period since she got the procedure, and her IUD should last her until she goes to go college.

“I was taking two [birth control] pills a day, which didn’t always help my bleeding, and it messed up my hormones a lot,” Dewey said. “I was kind of sick of that. So when I got the IUD, it was just supposed to be centered in my uterus, which was really what I wanted. Even though the pills were working just okay, I still wanted to change because it’s not fun to not really know how you’re going to feel when you wake up.”

In order to protect herself in a case of an emergency, she was given a Medical ID Bracelet at birth. The small metal bracelet includes some of Dewey’s vital information, including her address, the type of Von Willebrand’s Disease she has and the medication she uses for it. Dewey did not wear her bracelet for a while, but once she got her period, she was reminded to wear it in case an emergency were to ever happen.

“It was kind of like a little happiness [seeing someone else’s Medical ID Bracelet],” Dewey said. “Just kind of recognizing that somebody else, not necessarily goes through the exact same thing that I do, but that they have something that’s a disorder or disease.”

Von Willebrand’s Disease affects around one percent of the population, making it a fairly rare disease, according to Dr. Elie G. Dib, a hematologist at IHA . The disease is not sex linked, but sometimes women get diagnosed more than men because their skin tends to be more fragile and they lose blood from menstruation.

Dewey has only met one other person with Von Willebrand’s Disease. She was excited to meet her because she could automatically relate to her, and did not have to describe her disease like she often has to when meeting new people.

“I was smiling ear to ear; I was so happy,” Dewey said. “It was in the middle of a show so she had to go on stage, but she was like, ‘oh my God a Von-sister.’ I started to cry after she went on stage because I’d never met anyone like me.”

Dewey will have to deal with her bleeding disorder her whole life. Although it can be a hassle at times — from large fluctuations in her hormones as a result from birth control and excessive bleeding — she is still proud of who she is.