Is there something wrong with me?

Self-image, confidence and comparison: growing up in the age of tabloid media. 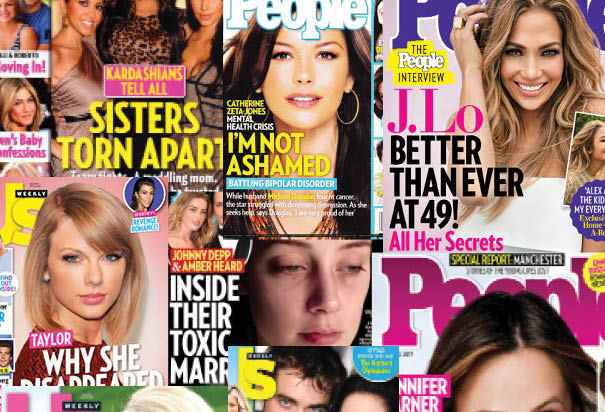 I waited in the self-checkout lane at the Kroger just eight blocks from my house; my mother stood next to me. My hair was wispy and blonde, my limbs long and lanky. As my mom double-checked her grocery list, I zeroed in on the tabloids sitting at my eye level in the black metal rack just a few feet away; they gleamed, just waiting to be read. I grabbed a copy of People Magazine with my thin, pale hand and flipped it open.

A few pages in, I stopped turning; bright colors and a collage of photos caught my eye. “Best and worst beach bods!” the two-page spread screamed at me. Some photos showed women bending over or walking, highlighting every roll of skin, stretch mark and area with extra cellulite; some showed photoshopped images of hourglass-shaped, golden-skinned women emerging from the water flawlessly. My mind immediately went to my own body; I knew that when I sat down and leaned over, the skin and fat on my tummy rolled over. Was there something wrong with me?

It was 2011: Justin Bieber and Selena Gomez were together; Katie Holmes and Tom Cruise were splitting up; I was nine years old.

As a young girl, I was fascinated with the idea of being influential and important. I had my mind made up on being a famous singer, so I looked up to people like Taylor Swift and Katy Perry as inspiration. Whenever I could, I gravitated towards reading tabloid magazines, such as People or Us Weekly. I thought that someday, I would be in them.

But as I looked at these magazines and saw women scrutinized and blamed for every little thing, from body fat to a bad breakup, I knew that there were too many things wrong with me to ever be able to make it in that world. I was too thin — which I knew from constant remarks about the visibility of my rib cage and fingers wrapped around my wrists — but when I bent over, my stomach had rolls on it, and the tabloids told me that having those was wrong.

Late elementary school to early middle school factored heavily into my future self-image. As the girls around me and I entered puberty, tabloid magazines remained our go-to quick reads. Sitting inches away in grocery stores, doctors’ offices and under the Christmas tree, they were always easy to access. Fashion and the gossip were the initial draws, but I always found myself stopping on pages that “exposed” celebrities for having imperfect bodies.

We continued to read these magazines and therefore became more familiar with body-shaming, but we thought it was normal. All of the celebrities were getting body-shamed, so what could be the problem? It was not as if only one media source fed us that information; it was everywhere we looked.

And it wasn’t just the body-shaming that we read about; the magazines reported every single detail of those celebrities’ lives. They pitted women against each other in “Who Wore it Best,” blamed breakups and divorces on the wives and published stories about female celebrities’ personal problems.

To me, those famous women were the most perfect people in the world. So what was I?

As I entered middle school and became more familiar with my personal imperfections, my confidence dropped off. I went from a size zero to a size four in a period of nine months; of course, my body was growing and changing because I was going through puberty, but the media always made it seem like women who didn’t fit into the tiniest sizes were ugly.

I became much more reserved in what I wore to school, and I was soon too self-conscious to change my clothes in front of other people, including my own mother. I wasn’t alone.

Authors of “The Confidence Code for Girls,” Claire Shipman and Katty Kay, recently confirmed in a survey of 1300 adolescent girls that it is not uncommon for girls to feel exactly like I did. They found that between the ages of eight and fourteen, young girls’ self-confidence plummets by 30 percent. The number of girls reporting pressure not to fail more than doubled between ages 12 and 13.

These statistics, heartbreakingly, are no surprise to me because they perfectly represent my feelings at those ages. I attribute a large portion of my self-confidence problems to the tabloid media — I let my fascination for fame control the way I viewed my body, my personality and my relationships.

Even though I haven’t cared to read a tabloid in a long time, the lessons I learned from them when I was nine years old have stayed with me. I have had to teach myself over and over again the things that I should have learned when I was little: my size does not determine my worth, my stretch marks do not define my beauty and my mistakes do not decide my life’s outcome.