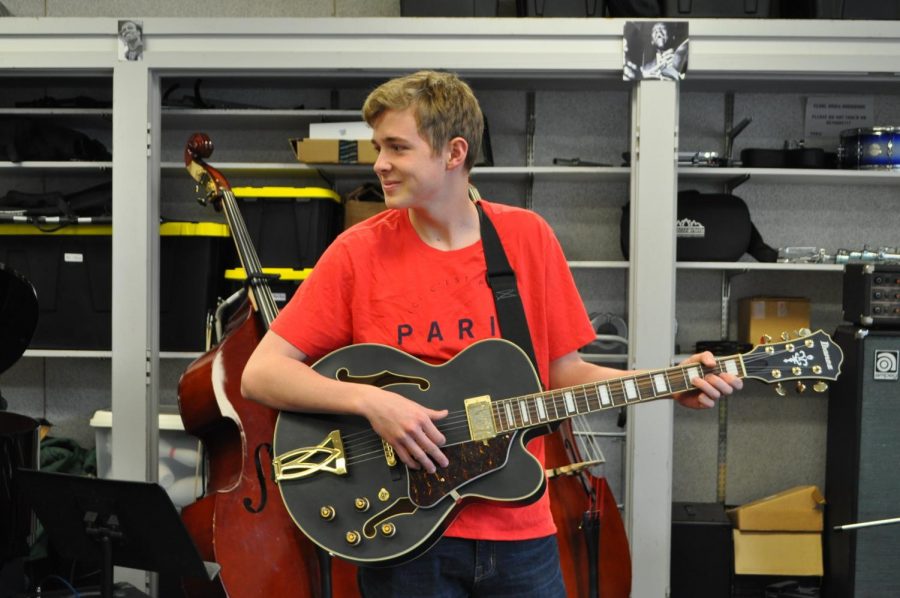 At the Hill Auditorium, an eighth-grade orchestra played the Egmont Overture by Beethoven. Gabe Tesar, a cellist in the orchestra, felt overwhelmed by the vibrations of all the instruments coming together. He lost himself within the music — no longer caring for how he sounded. The uplifting music carried through the audience. Soon Tesar no longer cared for what the audience thought either. He was calm. He was at peace. Something he recalled doesn’t happen very often but when it does it’s shattering.

“It’s really rewarding to put energy and creativity into something and getting better in return,” Tesar said.

Although, Tesar — now a senior at Community — is still passionate about playing music, much like some of his classmates he doesn’t know what he wants to do in college, and much like his music, he hopes to put in the energy and creativity for a great gap year.

Watching his two older brothers go through two different college experiences, ultimately motivated Tesar to take a gap year before going to college. However, Tesar’s gap year is quite unique; he chose not to apply to any colleges, and he chose to jump on an opportunity to go to Switzerland for the year.

Tesar’s oldest brother, who is 10 years older than him, went to the University of Michigan knowing what he wanted to do — a major in environmental science and a minor in statistics — which allowed him to have a straightforward college process and experience. But Tesar’s other brother, who is 4 years older than him, had a completely different experience. Initially, he went to the University of Minnesota, which turned out to not be the right fit for him, resulting in a tough first couple of years.

“He felt like he had to go to become an academic,” Tesar said. “But that just wasn’t who he is.”

Because Tesar’s brother felt the indirect pressure to go to a Big Ten school — one of the 14 Division I schools in the midwest and mid-Atlantic — from his friends, he ended up rushing the process not knowing what he wanted to do. Big Ten schools are also known for their academics, which can pressure students who live in the midwest and mid-Atlantic to attend these well-regarded schools.

But after Tesar’s brother came to the realization that he didn’t enjoy being at the University of Minnesota, he ended up going to Institute of Production and Recording, a music school in Minneapolis. Now, he’s working in Minneapolis at a music technical institute.

“When you’re going through this whole [college] process, you need to be patient with yourself and not expect yourself to know what you’re doing right away,” Tesar said. This is why when Tesar entered his senior year, he decided to not rush the process and did not apply to any schools, especially, when a great opportunity presented itself: his mother will be working in Switzerland for the next year. Since Tesar doesn’t know what college he wants to go to or what career he would pursue, he figures he will join his mom in Switzerland.

“I feel like you should just seize your opportunities,” Tesar said. “You shouldn’t feel like you have to go down certain pathways. I saw this opportunity and I’m choosing to see all the good things that can come out of it.”

Tesar plans on using his gap year time to not only travel but to retake some standardized tests (SAT or ACT) and get some recommendation letters from teachers. This allows him to have more time to finish the college process without having to hurry to submit his applications. But since Tesar decided to wait to apply, his senior year grades will also be taken into account by colleges. This means he couldn’t let senioritis get to him. He couldn’t slack off in his classes.

However, once Tesar is in Switzerland, he is hoping that his stay there will allow him to mature and figure out what it is he wants to do in college. He’s looking into taking some classes, specifically European history, and German, at a local university. However, his time won’t be spent staying in one place; the first six months he’ll be staying in Zürich, Switzerland (German-speaking region) and the next six months will be in Lausanne, Switzerland (French-speaking region).

But other than those plans, the rest is quite spontaneous. Tesar’s mom will be working from Monday to Thursday, leaving a three day weekend for both of them to travel to other European countries.