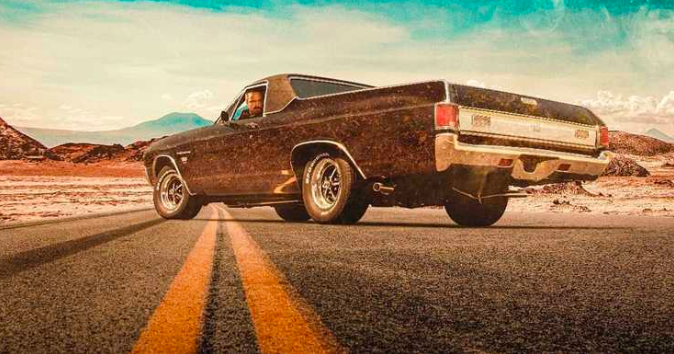 After over six years since the finale aired of the hit series, “Breaking Bad,” writer and director Vince Gilligan finally has gifted fans with another attention-grabbing story in “El Camino: A Breaking Bad Movie.”
Although the series wrapped in 2013, the film resumes right where the last episode culminated, wasting no time in concluding Jesse Pinkman’s unfinished story. With the loss of Walt and so many other main characters throughout the bloody show, the film solely follows Jesse and his journey to escape and leave his old life behind him in the midst of his own manhunt.
With a six-year break separating the Golden Globe winning show and the new film, Aaron Paul’s stellar portrayal of Jesse Pinkman is crucial for convincing watchers that no time has passed in the story. In the very first scene we’re immediately thrown right back into action as the film kicks off with Jesse speeding away from captivity in the renowned black and red El Camino.
For the first time, watchers only see Jesse’s perspective, and in the film we get to see how his point of view has transformed. From losing his business partner turned enemy, to being tortured and held captive, Jesse turns on survival mode and completely loses his interest in the meth and money-making business.
Instead of cooking, in order to really feel safe with the current bounty on his head, Jesse has just one simple goal: to get a new identity. But this is where the issue arises, and a new identity will cost him more money than he can afford. The action-packed hunt for money takes the film to the clear climax in which a shootout takes place.
The many twists and turns of the story lead Jesse to old characters and similar themes from the award-winning show, and getting to see iconic characters like Badger and Skinny Pete after six years is an extra bonus for fans of the two well-remembered personalities. Jesse’s complex state of mind during the film gives us flashbacks, and the highly anticipated scenes with Walt, who met his demise in the season five finale, appear halfway throughout the film. Unlike the typical movie flashback, however, we are given a whole new sequence of scenes that would have taken place early on in season one right after Walt and Jesse started cooking together. The scenes give watchers a break from the intense urgency of the film, and it takes us back to the nostalgic first season with only the unknown ahead of the two naive characters.
Even with the absence of characters like Walter Jr., Skyler, Hank, Gus and countless others, basing the film off of Jesse’s incomplete ending is all that’s needed from the film. The season five finale, “Felina”, left Jesse’s future ahead of his escapement untold, so this satisfactory and thorough resolution to his story was exactly “Breaking Bad” fans were left craving.
It’s clear that “El Camino: A Breaking Bad Movie” delivered on the expectations that were set, and the release of the film triumphantly concludes the ingenious plot that began a staggering 11 years ago.