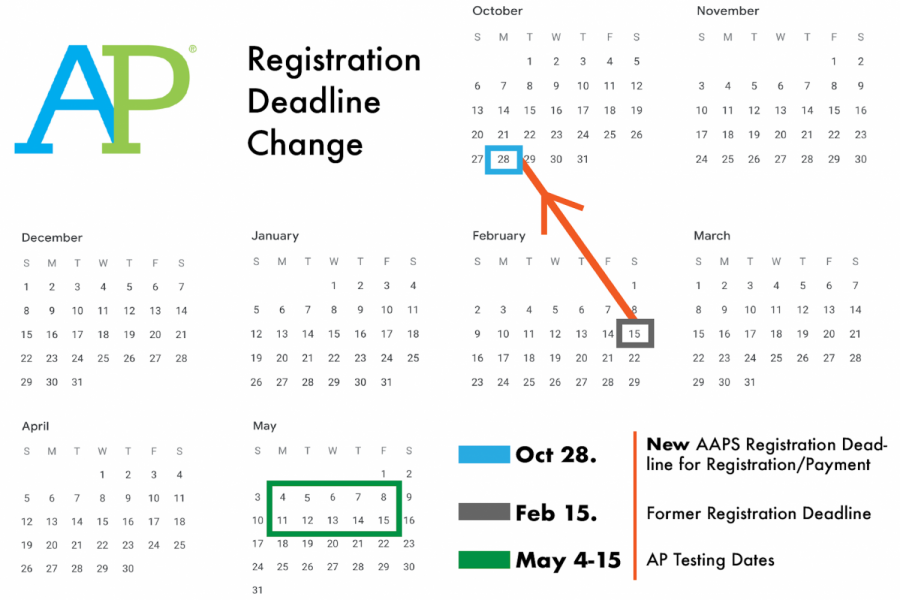 Important dates for the AP exams. This school year, the AP Calculus exams will be on the morning of May 5.

Starting in the 2019-20 academic year, the College Board has introduced a new registration deadline and resources to “improve student success in Advanced Placement (AP) exams,” which provide college credit for thousands of high-scoring students nationwide. However, these changes threaten to have the reverse effect on Community High School (CHS), especially to the students of its calculus classes.

“I think the push for the College Board to want to make the curriculum more accessible to more students and make it more equitable is what is not working in our case,” said Maneesha Mankad, a CHS teacher who encourages her calculus students to take the AP Calculus exams. “We’re not offering an equitable opportunity for everyone to take the exam because the kids who are feeling less confident about the curriculum right now are the ones who are not going to sign up for it.”

While both Mankad and Anne Thomas, the two Calculus teachers at Community, are excited about the new exam resources, which include progress checks and a question bank of real AP questions, they have not been able to access them like AP Calculus teachers at other schools. Additionally, they are concerned that the new registration deadline, which was changed from March to November — prompting the Ann Arbor Public Schools (AAPS) to set its own deadline to Oct. 28 — will deter students from taking the exam.

Though CHS senior Nina van der Velde planned to take the AP exam — which requires a $130 registration fee for AAPS students — when signing up for calculus, she observed that she was in the minority.

“Most people didn’t know they could take it,” Van der Velde said. “A lot of people are scared to spend that much money up front, when they don’t really know what they’re going to get out of it.”

She contrasts this with the AP Chemistry class she took at Huron High School last year, where most students were committed to taking the exam when the former February AAPS registration deadline rolled around.

“By then everyone had experienced the material and taken some tests, saw how they did, and knew how they felt about the class,” van der Velde said.

Trials by the College Board suggest that early registration leads to greater commitment and higher passing scores — particularly from underrepresented groups. However, because CHS does not offer the accompanying AP classes, the deadline change makes it particularly difficult for students to commit to the exam at such an early part of the school year.

Mankad is also concerned about students that choose to take the AP Calculus BC exam — which goes beyond the content covered in the calculus class and covers a full year of college calculus as opposed to the one semester of the AB exam — that ultimately feel unprepared. In such a situation, she is worried that these students will be unable to switch to the AB exam.

In addition to issues with the registration deadline change, neither of the CHS calculus teachers were informed of the new exam resources by the school district and have yet to gain access to them, leaving CHS students at a disadvantage. However, Thomas believes that it ultimately will not be a problem, as long as she can get access to them within a month, once her students have progressed further in the class.

“I just would have liked the [AAPS district] to have realized and kind of anticipated some of the problems,” Thomas said.

Mankad hopes that the College Board will provide an opportunity for students to register later on without penalty.

“I think at least for our school, that would mean that more students would be willing to sign up for it, and would be up for the challenge of learning the AP curriculum,” Mankad said.